The Swallowtail That Got Away (Family Papilionidae)

Roger Tory Peterson once said that the secret of being a good birder is looking twice. The same can be said of other natural history pursuits, especially dragonfly and butterfly-watching because butterflies and dragonflies, like birds, were issued wings, but not maps, and some routinely show up far away from their natural ranges (to the delight of all).

One fine June day in 2007 (early in her digital point-and-shoot days), the BugLady spied this beautiful swallowtail (family Papilionidae) in the middle of a field and was able to get a single shot of it before it left (“Hmm,” she thought, “What was that?”). Not a Black swallowtail—Black swallowtails, to the BugLady’s eye, have a different “attitude”—they seem very trim and their movements are tighter than the loosey-goosey Tigers. Turns out that it was a Pipevine Swallowtail (Battus philenor), a species that was not on her radar. 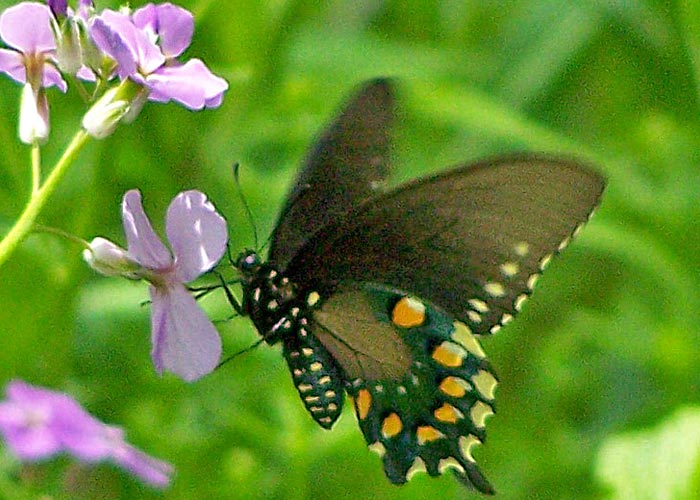 Wisconsin has two common species of dark swallowtails—the Black Swallowtail and the dark morph female Eastern Tiger Swallowtail—and we host two dark species that are uncommon strays, the Pipevine and the Spicebush Swallowtail. The latter two are drifters whose caterpillar food plants are not native to Wisconsin. The classy PS has a wingspan between three-and-a-half and almost five inches, varying intensities of blue on the upper surface of the wings (males are brighter) and flashy red, white and blue spots on the lower surface of the hind wing. (See the Bug Guide website for image of the PS female and an image of both sexes. Note: About those symbols for male and female—the circle with the plus sign at the bottom, the “hand mirror,” stands for female. Someone put that mnemonic into the BugLady’s head in high school, and now she passes it on). 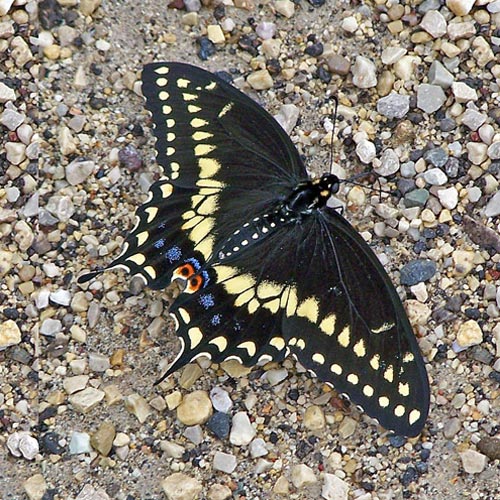 The natural habitats for this lovely wanderer include fields, parks, gardens, dappled woods, and edges from Central America through the southern U.S., wherever its food plants grow; and its travels take it as far north as Oregon, southern Canada, and New England. PS caterpillars are specialists, feeding on Pipevine/Dutchman’s pipe and Virginia Snakeroot, plants in the genus Aristolochia in the Birthwort family Aristolochiaceae. Only one member of the Birthwort family, wild ginger (Asarum canadense), grows in Wisconsin, but captive PS caterpillars reportedly will starve to death before they will eat it. Adults nectar on a variety of flowers (and, like bees, can learn the benefits of flower constancy—that is, they can connect specific kinds of nectar with certain colors of flowers). And then there’s puddling.

Male butterflies of many groups, not just swallowtails, also get nutrients from puddling—using their proboscis to soak up moisture, proteins, amino acids, and minerals from damp mud, sand, carrion and feces. Concentrations of the desired compounds may be dilute, forcing the butterfly to consume lots of liquid and then concentrate the salts. Why? First, active insects need sodium for neuromuscular activity. He is more active than she is, and the “salt-free” diets of both caterpillars and adults don’t supply much of that nutrient. Second, some species of butterfly must imbibe a specific amount of minerals before they can produce the pheromones that will attract a mate (the female may rate her suitor by the quality of his pheromones). And third, he incorporates sodium into the spermatophore (sperm packet) that he passes to the female. She, in turn, distributes most of the sodium into her eggs, which increases her egg production and gives her offspring a salty survival “boost”. Read Butterflies in the Garden by Henry Turner on the Texas Master Naturalists Cross Timbers Chapter website.

The BugLady was pleased to be reacquainted with the excellent Butterflies of Massachusetts website, which offers thoughtful analyses of 200-plus years of butterfly data and tells us that the PS was first reported in that state in 1840 and was not uncommon there for the next century, as people planted Dutchman’s pipe on their porches, trellises and arbors. When that practice faded in the mid-20th century, PS reports dwindled. PS’s overwinter in the chrysalis stage, and the chrysalis is considered to be cold-intolerant, but historically there seem to have been permanent PS colonies in parts of Massachusetts—and Wisconsin—where Dutchman’s pipe was planted. Butterflies of Massachusetts posits that our warming climate may allow the host plants to move north, followed by their butterflies.

Dutchman’s pipe and Virginia snakeroot are poisonous, and the chemicals that render the aposematically (warningly)-colored caterpillars distasteful and toxic are ingested and processed by them, stored, and passed on to the body of the adult. So, if you’re a Spicebush, a Black, or a black-morph Tiger Swallowtail (or even a non-swallowtail Red-spotted purple), looking like a PS is a good thing (less so here in God’s Country, where the PS is so uncommon that predators haven’t had a chance to learn their lesson). Cashing in on another species’ defense strategy via imitation is called Batesian mimicry. If black swallowtails and spicebush swallowtails also taste bad, and research suggests that they do, we can add Mullerian mimicry to the story (species with varying noxiousness imitate each other, resulting in a larger pool of teachers for their predators). In Butterflies of the Great Lakes Region, Douglas and Douglas state that “the pipevine swallowtail is a tough butterfly, with resilient, hard-to-crush cuticle that probably makes the butterfly more resilient if it is accidentally attacked by birds unaccustomed to its distasteful properties.” The similarities of the four species are illustrated here on the Louisiana Naturalist blog. 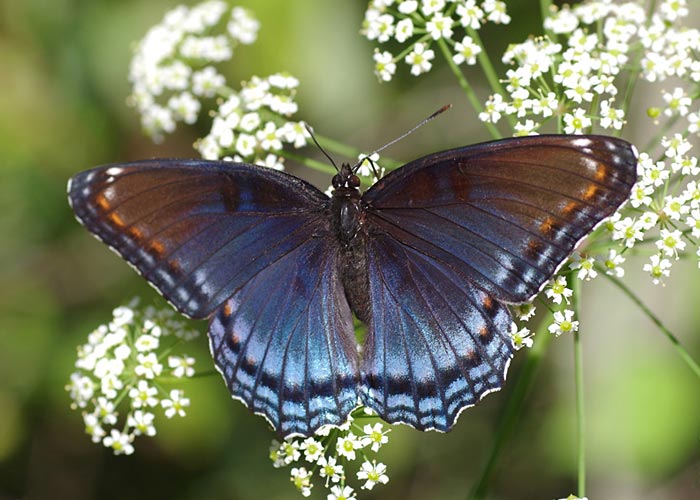 According to Mike Reese’s Wisconsin Butterflies website, in the Summer 2001 issue of American Butterflies, an article called “The Pipe-dream Project” suggests that “planting pipevines could help in increasing the distribution and abundance of this species, in a similar manner in which Bluebird houses have aided that species. Since the host plants do not grow here naturally, plantings of acceptable cultivated varieties of pipevines might be useful.” A butterfly gardening website warns against planting tropical Aristolochias like Giant Dutchman’s pipe (A. gigantea), which the PS will oviposit on, but which is so toxic that it kills the caterpillars.

Males patrol for females; females lay clusters of beautiful red eggs on young, tender Aristolochia vegetation (the bigger the plant, the more eggs she lays), and the larvae feed gregariously for their first few instars, before becoming loners as they get older. The awesome red or black caterpillars are decorated with fleshy bumps and filaments (one source said that warmer caterpillars are redder caterpillars).

Like other swallowtails, the caterpillars possess an osmeterium, a retractable, fleshy, forked horn that appears when they are alarmed , looks like a snake’s tongue, and emits a foul odor. PSs overwinter in the chrysalis stage; there are two broods in the north and three or more at the southern edge of its range.

PSs have developed an interesting behavior, gathering in groups on the outer edges of treetops in late afternoon, perching overnight, and dispersing well after sunrise (there are anecdotal reports of feeding aggregations, too). Research by Pegram, Han and Rutowski in Arizona showed that as many as two dozen PSs will gather in one spot and deliberately orient their wings in a plane/posture that makes the aposematic red and the iridescent blue even more conspicuous. The timing of this “in your face” display (the BugLady’s term, not the researchers’) coincides with the times of day when insectivorous birds are most active; the tree-top location gives them maximum exposure to the last and first rays of the sun (the iridescence can even be seen for a while after sunset); and their location keeps them out of the reach of ground-predators that may hunt by smell, not sight. In the experience of the researchers, the only butterflies taken by predators were those that had perched individually, away from the group. It pays to advertise.