State of the Monarch (Danaus plexippus)

Ecologically speaking, putting almost all of your eggs in one basket is a really bad idea.

Quick Review: Monarch butterflies (Danaus plexippus) feed on a variety of flowers but lay their eggs only on plants in the milkweed family. The bright, aposematic (warning) colors of both the butterfly and its caterpillar alert potential predators to back off (poisonous milkweed sap renders the caterpillar toxic, and it carries its toxicity into adulthood). 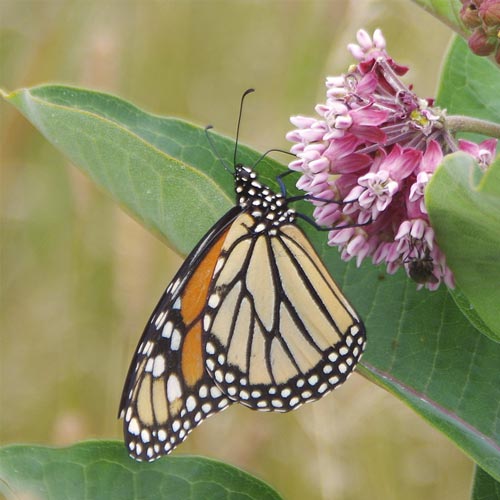 Monarchs Migrate: Let’s unpack that simple, two-word sentence, because the biology behind it is complicated (and miraculous), and whole books have been written about it.

There is a Pacific population of monarchs that migrates only as far as southern California in winter (though some free spirits have wandered as far as Hawaii and beyond), and there are year-round breeding populations in the Florida peninsula and along the Rio Grande. Historically, all of the migratory monarchs east of the Rockies overwinter on a dozen or so smallish sites in the oyamel fir forests of the Central Highlands northwest of Mexico City. 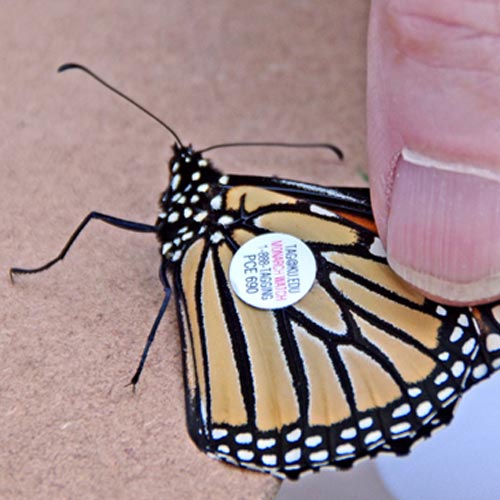 Monarchs usually return to Wisconsin by mid-May. They were a few weeks late this year, and the BugLady has an email correspondent in eastern Pennsylvania who did not see an adult monarch until the very end of July. Researchers don’t know whether the late migrations recorded in the past few years are random events or are due to climate change. Once they get here, there are several short-lived generations that serve to produce more monarchs, but in mid-August, a generation is produced that uses its energy to migrate rather than to procreate. Experiments suggest that “host plant quality” (monarch caterpillars prefer tender, young leaves, not the leathery plants of late August), decreasing day length, cooler overnight temperatures, and the changing tilt of the earth combine to “flip a switch” in the monarch’s brain (which is about the size of the head of a pin). Wherever they are, monarchs are cued to start moving south when the sun recedes to around 57 degrees above their southern horizon (they migrate south along the shore of Lake Michigan). 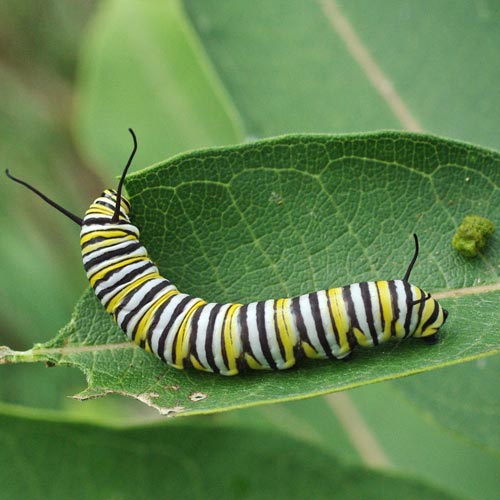 They navigate using an internal “sun compass” that allows them to adjust their orientation in relation to the sun’s movements across the sky, and they probably also sense magnetic fields with their antennae. This allows monarchs in Michigan, Maine and Montana set correct (but different) flight plans for central Mexico. This final brood, called the Super-generation or Gen 5 (the fifth generation removed from Mexico) is exceptionally long-lived and is the only generation that is tagged for migration studies. 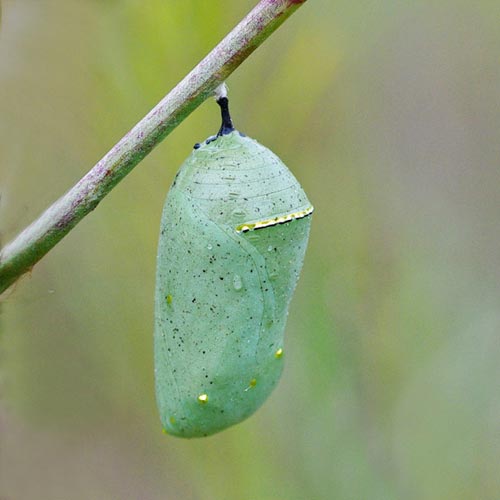 They move south in the fall, spending the winter some 1,500 miles south of Wisconsin. Monarchs eat little on their wintering grounds, depending on fat reserves built up during their leisurely migration (a newly-emerged butterfly has about 20 mg of fat in its body, but a monarch newly arrived in Mexico carries 125 mg of fat). In spring, signaled by warming temperatures and the availability of milkweed, they become reproductively ready and head back north, being careful not to outpace the emerging milkweed plants. They lay eggs in the southern tier of states, and their offspring continue the journey. 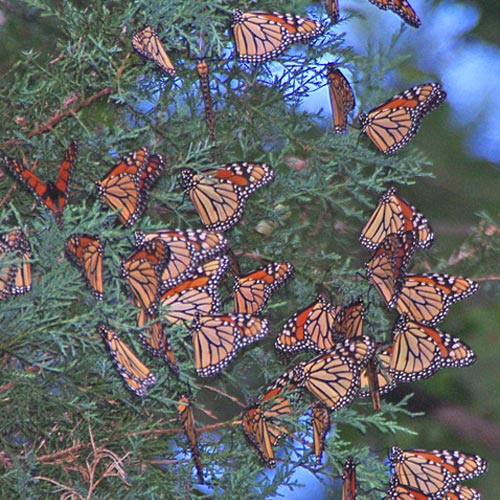 The spectacle of Monarch butterfly migration is one that inspires international awe (and, not surprisingly, sometimes-invasive ecotourism), and the drastic decline in monarch numbers over the past decade has resulted in quite an outcry. Some numbers: in the mid-1990’s, an estimated one billion monarchs migrated to central Mexico, with another million counted in California; today, the entire population is estimated at 56.6 million—a decline of more than 80% (a 2013 World Wildlife Fund count was 33 million). During the winter of 1996-97, wintering butterflies covered 21 hectares (one hectare is just under 2.5 acres); in 2013-14, they occupied only two-thirds of one hectare of forest, and 80% of the butterflies were found on just a few sites. Predictions for this year, if all the ducks stay in a row, are more optimistic, but far from rosy.

What’s happening? In a nutshell:

Monarch survival depends on favorable weather in their summer range, during migration, and on the wintering grounds. The extreme weather events associated with Climate Change will affect monarchs negatively—cold, wet winters; a warmer climate in Mexico that may negatively impact the oyamel fir trees; large storms or stubborn frontal systems at the start of the spring migration; and prolonged heat and drought that shorten the blooming periods of flowers (and therefore the availability of nectar), especially in plants that the butterflies depend on during migration (remember 2012, when even the prairie plants looked wilted?).

It’s cold up in the mountains, but wintering monarchs can tolerate cold temperatures if they’re dry, and they burn fewer calories idling in cool weather. Rain or snow that wets the butterflies, followed by freezing temperatures, is a one-two punch, especially in January and February, when butterfly thoughts are turning northward and their fat supplies are waning. In the winter of 1995, snowstorms on the wintering grounds caused greater than 60% mortality. As the butterflies headed north in the spring of 1996, el Nino delivered heavy rains the southeastern part of the US and more died. In 2002, 2004, and 2010, huge Pacific weather systems brought heavy rain, hail, and frigid air into the wintering areas, decimating the monarch population; the 2002 storms resulted in a 75% casualty rate.

Although the Mexican government has banned logging in the area, illegal logging continues to nibble away at the oyamel forests, which affects the microclimate created by the trees’ canopy and allows greater temperature fluctuations within the forests. The trees are also threatened by bark beetles. North of the Rio Grande, commercial-urban-suburban development is replacing monarch habitat at a rate, according to one source, of 2.2 million acres per year (6,000 acres a day). The biofuel movement accounts for some of this loss, with land being taken out of the Conservation Reserve Program to produce corn to make ethanol. The tricky part, of course, is balancing the needs of the monarchs and the needs of the people who live in the area.

The Corn Belt produces more than half of the monarchs that migrate to Mexico. Common milkweed (Asclepias syriaca) is their food of choice, but common milkweed is disappearing, largely due to today’s agricultural practices. Crops like corn and soybeans are genetically modified so that they can survive exposure to herbicides like Roundup, allowing farmers to spray more often (crops are in the works that will have multiple resistances). Sprayed chemicals often “drift” past the borders of agricultural fields, and roadside flowers become collateral damage. Neonicotinoid insecticides kill agricultural pests, but “innocent bystanders” are also exposed to this neurotoxin when they nectar on adjacent wildflowers.

The “clean farming” trend that advocates removing fence rows and non-agricultural vegetation between cultivated fields leads to the loss of native plants and wildlife, and roadside mowing takes a toll, too. Milkweed is slow to regenerate, and one study suggests that 60% of milkweed has been eliminated from the grassland ecosystem in the Midwest. The tricky part, of course, is balancing the needs of the monarchs against our desire for inexpensive food.

Ophryocystis elektroscirrha (OE) is a protozoan parasite that infects only monarchs and the related Queen butterflies. One theory is that monarchs pick up the protozoan from the leaves of tropical milkweeds that don’t die back in the winter and so have a longer period to harbor the parasite and its spores. Female monarchs pass it on to their eggs and to the plants they land on, and caterpillars ingest it as they feed. Most of the damage is done during pupation, and emerging adults are covered with spores. Infected adults may simply be less fit (the long migration south is Darwinian Natural Selection in action), but a heavily infested monarch may have difficulty emerging from its chrysalis and may have deformed wings. OE was first noted in South Florida and has been around for almost 50 years, and although it’s been found in all of the populations of monarchs, the highest rates of infection are found in non-migratory groups (reaching 70% in South Florida). The infection rate in eastern migratory monarchs is between 7% and 8%.

Chip Taylor at Monarch Watch issues frequent updates about monarch populations. In his August 6, 2015 status report, which is based on reports from people like us, he says that,

The number of reports of sightings increased after 16 July and soon thereafter followed reports of eggs—lots of eggs—mostly in the regions previously identified as likely to have a good migration (Dakotas to Michigan). The number of eggs found and the distribution of these finds now leads me to suspect that the migration through the upper Midwest will be better than any migration seen since 2011. This is good news since the tagging, isotope and observational data suggest that more than 90% of the monarchs reaching Mexico originate in this region.

He goes on to say,

If this forecast is more accurate than the one I used to make my predictions in early May—and conditions during the migration are storm-free—the number of monarchs at the overwintering sites could occupy an area of 1.8 – 2.3 hectares. This would be a substantial improvement given that the total last year was 1.13 hectares and that of the previous year was 0.67 hectares. More would be better of course, since the predicted El Niño could take a toll on the population during the latter part of the coming winter. It will be a battle but we need to get the overwintering numbers up to at least 4 hectares in the coming years to be assured that sufficient numbers survive in the event of catastrophic winter storms such as those occurring in January 2002 and January/February 2004.” To reach the 4-hectare goal (or the 6-hectare objective of the United States Fish and Wildlife Service) will require a massive effort to restore milkweeds in the milkweed/monarch corridor that extends from Texas through Minnesota. The weather during the breeding seasons will need to be favorable as well. 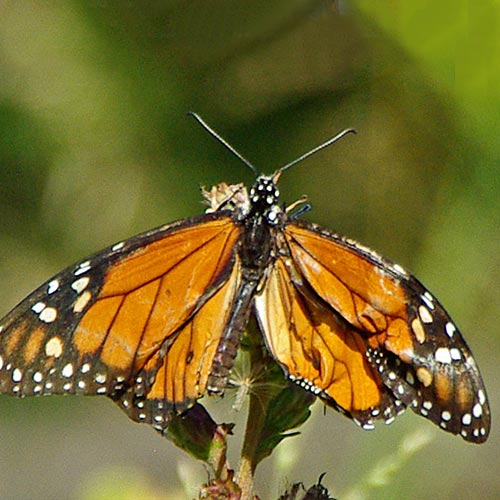 The plight of the monarch has energized people and organizations across the country. The Reserva de la Biosfera Mariposa Monarca, which contains most of the overwintering sites, was created in 1980 and declared a World Heritage Site in 2008. The International Union for Conservation of Nature declared monarch migration as a Threatened Phenomenon, and the U.S. Fish and Wildlife Service is considering adding monarchs to the Endangered Species list. Monarchs are expected to benefit from the 1,500 mile long “Butterfly Highway” proposed by President Obama as part of his efforts to help native pollinators.

The monarch’s population plunge has been publicized by (among others) the National Wildlife Federation, the Defenders of Wildlife, the Xerces Society, World Wildlife Foundation, USDA Natural Resources Conservation Service, the Natural Resources Defense Council (suing the EPA over pesticide regulations), and a whole bunch of newspapers and periodicals. The U.S. Fish and Wildlife Service is committing $20 million for habitat restoration over five years. The Monarch Joint Venture (MJV) is a partnership of federal and state agencies, non-governmental organizations, and academic programs working together to support and coordinate efforts to protect the monarch migration across the lower 48 United States. And there are many grassroots organizations.

What Can You Do (among other things)

Plant milkweed (native species only); Plant flowers for butterflies to nectar on; Join the growing number of people who collect monarch eggs from vulnerable locations (like the paths of mowers) and raise them indoors for release (instructions on-line); Refrain from celebrating a birth or death by releasing commercially-raised butterflies; Be ultra-cautious in your use of pesticides; and Be a citizen scientist – add your observations of eggs and adults to the data at Monarch Watch and/or the Monarch Larva Monitoring Project.

Such a fragile balance.

“The Monarch butterfly unites the three countries of North America in peace. It is an ambassador of peace which requires protected areas and ecosystems that are preserved through sustainable agricultural and forestry practices. Let us continue to work together to maintain a healthy and balanced ecosystem for all North America." President Jimmy Carter