The Porch at Night

It’s a good thing that the BugLady doesn’t have nearby neighbors (or a Home Owners’ Association) who might be alarmed about someone who turns on the porch light and then creeps around taking pictures of porch critters at midnight.

Let’s back up a bit—what’s up with insects and lights? There’s no simple explanation, and there’s no theory that is universally embraced by the entomological community (and some ideas are actively “pooh-poohed”). First of all, many organisms have a strong love for the light (a positive phototaxis ) or a strong avoidance of it (a negative phototaxis). It doesn’t fall out cleanly along nocturnal/diurnal lines—some daytime critters flee the light and some nighttime animals embrace it. What do scientists and the popular press say?

At any rate, the BugLady’s nocturnal excursions have yielded pictures for a number of BOTWs (and have thrilled the cats, who wait at the door for misguided moths that fly in). Here’s what’s up and about in the wee hours these days (not including the many mini-moths that the BugLady has fun stalking but cannot identify). Yes, the BugLady is aware that her porch needs washing/painting and her window screens are showing their age. Volunteers are welcome, any time.

Who can resist a moth named The Horrid Zale? John Hubner, the German entomologist who named it Zale horrida in 1818 must have been a Latin scholar—“Horrid” comes from horridus, which originally meant bristly or rough. Its caterpillars feed on viburnums, especially Nannyberry, which grows not far away in the BugLady’s field. For great images of the horrid bristles, try here on the site. 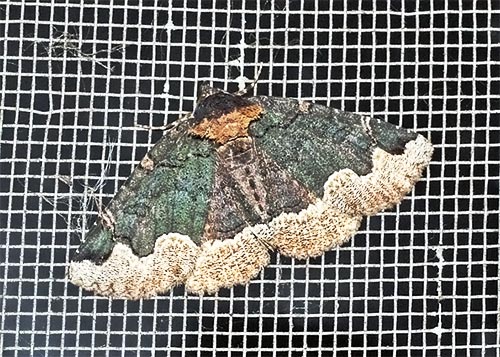 Some of the Snout Moths didn’t get the memo about proper wing-folding. The BugLady suspects that this beautifully-marked little (3/4”) guy/gal is the Eastern Grass-veneer Moth, Crambus laqueatellus, one of 40 or so similar-looking species in the genus. As its name suggests, its caterpillar feeds on grasses, which the BugLady has, in abundance, close to her porch (though one maverick source says they eat mosses). 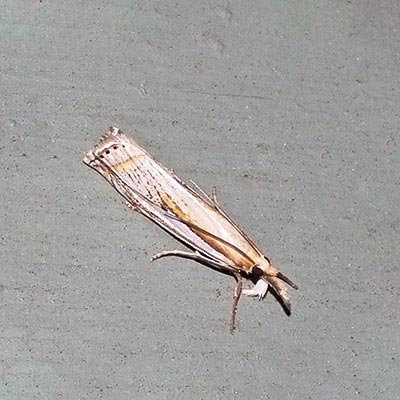 The Virginia Ctenucid Moth (the “C” is silent like the “r” in “fish”) is a day-flying moth that is often mistaken for a butterfly because of its bold flight (like most moths and unlike most butterflies, it lands on the underside of a leaf). 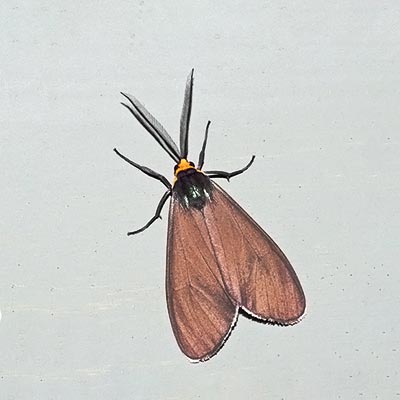 The green Crane Fly comes with the fantastic name Erioptera chlorophylla. Crane fly larvae live in damp-to-wet lands ( Erioptera like organic mud) but the adults range far and wide and are often seen on window screens. The BugLady came across a 1913 account from Orono, ME which informed her that when these green beauties are dropped into boiling water, their color disappears. The BugLady can only speculate that they were mistaken for lobsters. 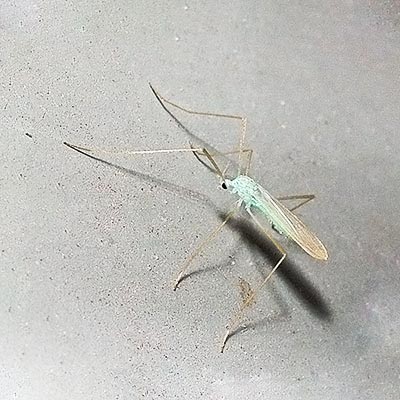 Daddy Long-Legs are common hunters on the front porch, by day and by night. If one picture is worth 1,000 words, then these two tell quite a story.

This large Stonefly had to travel some distance to get to the BugLady’s front porch. Their young (naiads) (aka “trout food”) reside in unpolluted rivers and streams, where they breathe with gills in their “armpits” and at the base of their two tails. 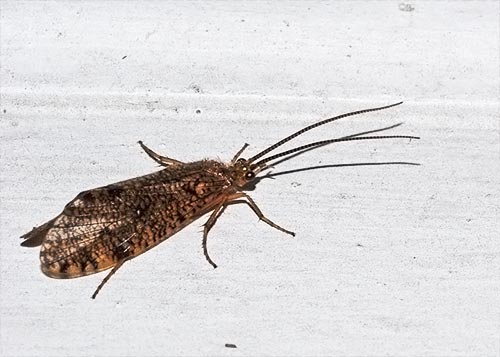 The Masked Hunter, of previous BOTW fame, is an assassin bug that made its way here from across The Pond and now ranges across North America. When one of the BugLady’s dust bunnies starts walking, it’s the nymph of the masked hunter. Dust, lint and dog hair attach to their sticky exteriors, providing the perfect camouflage. Its prey here is a small ichneumon wasp. 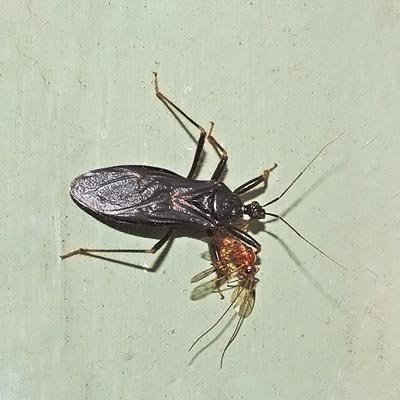 Finally, a glamour shot of Wisconsin’s state bird, the Mosquito, a constant companion on the porch at night and elsewhere during the day. Female mosquitoes, famously, enjoy a blood meal in order to lay eggs, while males feed on plant juices. Male mosquitoes have fabulous antennae, which they use to tune in to the whine of a female’s wingbeats. When a guy and a gal meet, they adjust the pitch of their hum by increasing/decreasing the speed of their wing beats—until they are humming at the same pitch. 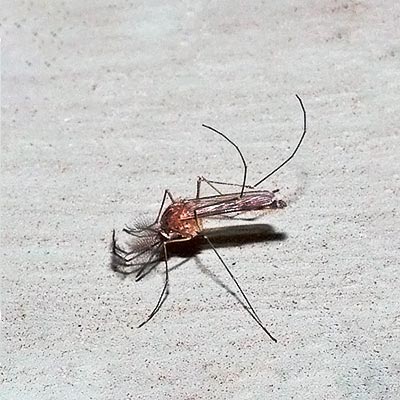 Check out a recent post by insect blogger Dragonfly Woman, on a few of the many citizen science projects involving insects.

An amendment: The old saying “Publish in haste, repent at leisure” applies here. Sharp-eyed BugFan Gretchen suggested gently to the BugLady that the bug labeled as a stonefly is actually a caddisfly, and she’s right. Stoneflies tend to rest with their wings flat on top of their abdomens. Caddisflies tend to “tent” their wings. Here’s how it should have read:
Caddisflies have aquatic larvae (naiads) that create tiny homes to live in. Caddisflies of still waters use plant pieces. Caddisflies of running water use tiny pebbles or spin webby nets that fix them to a rock, where they catch food as it flows past. Back in the time of the first Queen Elizabeth, wandering dry goods merchants roamed the land. Those who sold threads and ribbons pinned samples of their wares to their coats, which created a fringe. Later, some clever entomologist named an insect with fringed wings a caddis fly. Ain’t history/entomology/etymology grand? Thanks, Gretchen.
ArachnidsFliesSpidersStonefliesTrue BugsWasps