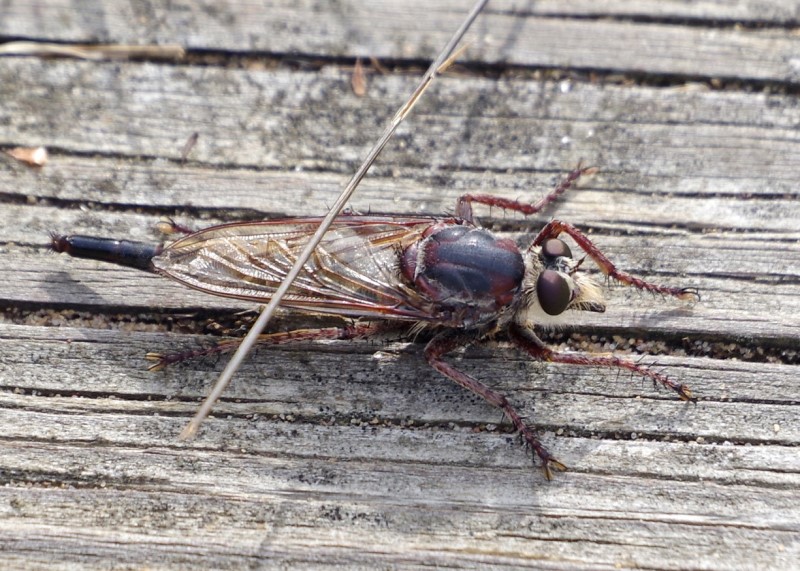 Note that all links lead to external sites.

Robber flies are a very cool bunch of flies that we have visited a number of times in the past. To appreciate the array of sizes and shapes and colors of Wisconsin robber flies from the tiny “Gnat ogres,”  to the bumble bee mimicking Laphria, to the Giant robber flies in the subfamily Asilinae (like today’s star), visit the robber fly corner of the Wisconsin butterflies website.

Besides being awesome-looking, these “bearded” flies (sometimes called Assassin flies) are predators, and they are not shrinking violets. In the Field Guide to the Insects of North America, Eric Eaton says that “Robber flies (family Asilidae) are to other insects what falcons are to other birds.” In an article published in the Bulletin of the Brooklyn Entomological Society in 1949, S. W. Bromley tells us that “Linneaus… gave this group of flies the name Asilus (the ancient name for flies which tormented cattle) in the belief that they were molesters of stock and cattle, a habit in which no robber fly today is known to indulge.”

Robber flies’ modus operandi is to spot an insect from their perch, grab it (and they will go after insects larger than they are), inject it with saliva to both kill it and soften its insides, and then perch and ingest the liquid through a tube called the hypopharynx. They eat lots of insects that are agricultural pests, but they haven’t been formally deployed as biological controls because they are equally likely to eat honey bees and Monarch butterflies.

There are about 1000 species of robber fly in North America, and the Missouri bee-killer (Proctacanthus milbertii), aka Milbert’s Proctacanthus, is one of 17 members of its genus north of Mexico. Bromley notes that “In Southern Alabama, Col. S. F. Blanton stated that it has received the common name of ‘Boo-hoo fly.’”

The spectacular Missouri bee-killer is found from sea to sea, and north and south of our borders in sort of a checkerboard pattern (the range maps in bug guide website come with a disclaimer that says, “The information below is based on images submitted and identified by contributors. Range and date information may be incomplete, overinclusive, or just plain wrong.”) According to Bromley, “Milbertii has for its habitat fields and pastures where the soil contains a considerable admixture of sand.” It’s often found around goldenrod, and it’s pretty well camouflaged when it sits on the ground surrounded by dry goldenrod leaves. The Missouri bee-killer is a late-season robber fly, and it’s one of the species that the BugLady found in the dunes at Kohler-Andrae State Park.

There’s some variation in color – the beard is creamy white, but some individuals aren’t as maroon as the one the BugLady found. They are active and noisy fliers, and they like to rest on open ground.

Males are territorial and will chase rival males. Robber fly courtship is a no-frills affair – he approaches her much like he approaches prey. After mating, she works her abdomen barely into the soil or sand and lays her eggs. She visits flowers before ovipositing because for best results, she must take in both protein and sugar before she oviposits. The larvae live in the soil and prey on invertebrates they find there, and they may also nibble on decaying plant material. In some robber fly species, the larva lives in the soil for up to three years before it pupates.

In a 1975 article in The Great Lakes Entomologist, Norman T. Baker and Roland L. Fischer wrote that “P. milbertii exhibits a very interesting defensive reaction when attacked by another fly. The attacked fly nearly always spreads its legs and wings outward and upward and curves the abdomen upward. Generally the fly turns to face the attacker and then tilts backward allowing it to better fend for itself. Usually the wings are buzzed in short bursts.”

Although some closely-related robber flies do concentrate more on them, Missouri bee-killers are generalists whose diet doesn’t include many honey bees (only 4%, according to one study). Grasshoppers and moths make up about three-quarters of their food, and they also prey on butterflies, beetles, bugs, bees (including bumble bees), and flies, and they’re not above a little cannibalism. In a study area in the Nebraska sandhills, researchers counted 437 Missouri bee-killers per hectare (one hectare is a little less than 2.5 acres) and 64,000 grasshoppers from 23 species per hectare. The flies devoured one to two grasshoppers per day, each, consuming an average of nearly 2% of the population of adult grasshoppers daily.

They fly fast, pick their prey out of the air, and land to feed. They wrap all six legs around it and administer a killing jab behind the prey’s head, often lying on their side until the prey is dead. They pierce their prey often as they feed in order to reach all its nooks and crannies, manipulating it with their forelegs. If you must handle a robber fly, handle it with care, because the larger species can jab painfully.

Baker and Fischer’s documentation of the daily routine of Missouri bee-killers included observations of its sleep habits. They wrote “These flies are quite active as long as the proper habitat is hot and sunny. When dusk approached, and the sun no longer shone on the habitat of P. milbertii, the flies cease all activity. Attempts to discover where they spent the night were nearly futile until it was discovered that the flies were resting in or under dead leaves beneath nearby trees or bushes. When the sun set the flies “entered a stupor” and became very inactive. If disturbed they would buzz their wings for a second or two and then again become inactive. Perhaps the buzzing will frighten a possible predator. The positions these flies may assume are often ridiculous. They appear to be dead. In one instance a male was discovered “standing on his head” and supported only by his front legs. Hull (1962) has also observed this behavior and interpreted it as ‘death feigning.’” Here’s an early morning shot.

Go outside – look for bugs – it’s not too late!