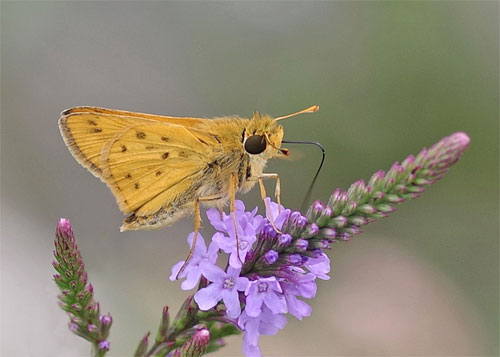 The Fiery Skipper is one of a pair of distinctive skippers that was featured in a BOTW in 2013. It’s an uncommon migrant to Wisconsin, but the BugLady saw 11 Fiery Skippers decorating the vervain flowers at Waubedonia Park recently, and they seem to be having a good year statewide, so she decided they deserve a more complete biography.

Skippers, so-named for their rapid, bouncy flight, are butterflies that the Field Guide to Butterflies of North America refers to as a “group of mostly small and confusing creatures” (the majority of skippers are either brown and orange or orange and brown). They are not moths, but they are often called “moth-like” because they are big-eyed, hairy, and chunky. Their short-wings have to work extra hard to propel them through the air (at speeds up to 20 mph, according to one source). Skippers have sometimes been called a transition group between butterflies and moths, but a genetic work-up places them squarely in the Superfamily Papilionoidea along with Monarchs, Tiger Swallowtails, Red-spotted Purples and the rest. Their antennae are different than a moth’s—ending with an elongate, hooked knob. 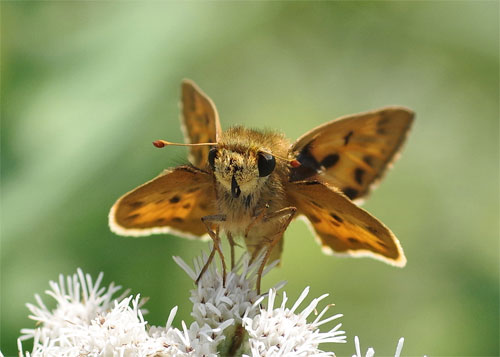 They are not moths, and the BugLady is dismayed when someone who should know better, like the University of California Department of Agriculture and Natural Resources Statewide Integrated Pest Management Program, says in a publication about lawn pests that “Fiery skipper adults resemble butterflies and….” Or when an article in the Journal of the Acadian Entomological Society in 2012 says “The Fiery Skipper (Hylephila phyleus Drury, 1773) … is a medium-sized skipper … commonly found on both American continents. Moths typically fly from early September to late October” [emphasis, the BugLady].

Here’s a nicely illustrated “how-to” (though the BugLady was dismayed to learn that there are skippers in Australia, too) . 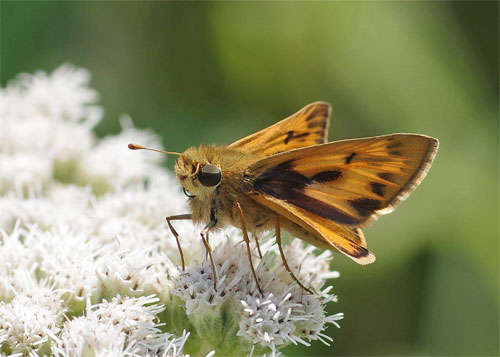 Fiery Skippers are in the skipper family Hesperiidae and the subfamily Hesperiinae, the Grass skippers (because their larvae eat various kinds of grass). Grass skippers often sit with their front wings spread partly open and their hind wings a little less so. Kentucky bluegrass is among the grasses on the Fiery Skipper caterpillar’s menu, and it’s considered a pest species in some areas because of the patches of dead, brown grass where caterpillars feed. Caterpillars live on grass blades that they fold/roll lengthwise and web into a shelter. Several sources pointed out that these shelters lie horizontally, close to the ground, below the blade of a lawn mower. They pupate on the ground, and the adults emerge with only one thing on their mind—females immediately start scoping out good habitat for their eggs, and males sit on the tops of grasses watching for them. Most reproductive activity takes place within their first few days as adults. Here’s a nice set of pictures of their life cycle.

There is a lot of variation within the species; females’ wings are more patterned than males’, and females can be notably un-fiery. 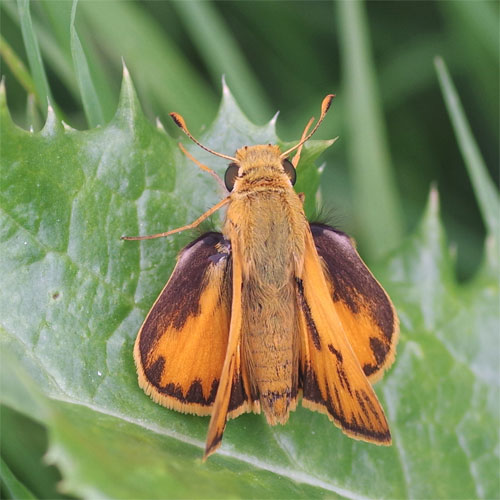 Sometimes, when the BugLady is collecting information for a BOTW, her subject lets her know what story it wants her to tell. In the case of the Fiery Skipper (Hylephila phyleus), the story seems to be about where it lives. Not in the short term—day-to-day it’s found in sunny, open spaces, often gardens, with flowers to nectar on and grass nearby for the larvae, from Canada to Argentina (with gaps in the Great Plains, Rockies, and Great Basin). But this is a largely southern-to-tropical butterfly that none-the-less migrates from the southern/resident portions of its range to the northern US and into Canada in varying numbers from year to year.

And that’s a relatively new phenomenon. According to the Massachusetts Butterfly site (whose data encompass 200+ years), the first Fiery Skippers were recorded in that state in 1940 (Rhode Island in 1911, Canadian Maritime Provinces in 1947). In Butterflies of Wisconsin (1970), Ebner tells us that the earliest state records here were in 1952 and 1957. He notes that the specimens “were rather fresh, perhaps being introduced here by stragglers that ventured into Wisconsin earlier during the same summers and layed [sic] their eggs.”

In the south, around the Gulf of Mexico and in the desert southwest, they breed most of the year. The butterflies that arrive here in early summer probably produce one brood that lives through the summer, but it’s too cold here for their caterpillars to survive the winter. It’s possible that patterns connected to climate change are enhancing the weather that supports the Fiery Skipper’s tendency to travel, and it’s probable that the regions where caterpillars of this exquisite butterfly can overwinter will extend north. 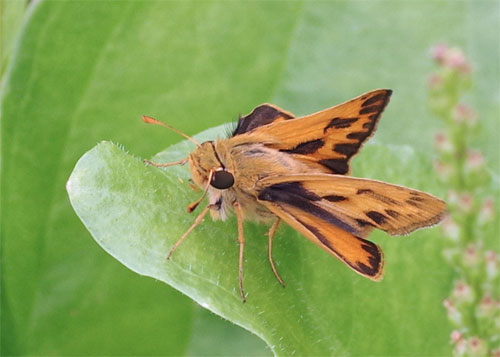 A resource that the BugLady regularly checks includes a section on economic impact in its species information. Fiery Skippers were given a plus for benefitting local economies via eco-tourism. Butterfly fans in northern states may travel to Fiery Skipper sites in big years—indeed, the Massachusetts Butterfly folks initially scheduled field trips to the most reliable sites for the skipper.

Nota Bene: one of the hits that came up as the BugLady researched the Fiery Skipper was a range map on the Moth Photographer Group’s site at Mississippi State. She thought it might be another one of those skipper/moth deals, but it turns out that the group posts range maps for butterflies, just as they do for moths, but not pictures. Good resource.