The BugLady has always been blown away by macro photographs of horse fly eyes (Check BugGuide). Spectacular. And excessive. (and – why??) Then BugFan Debra sent a picture of a buffalo treehopper that had pretty special eyes, too ( Buffalo Treehoppers picture). And asked “Why?”

The BugLady mused about disruptive coloration; BugFan Debra (wisely) said “But it is a little green bug with teeny-tiny eyes that no one can see…. So, if it’s a green bug, already camouflaged on a leaf by the green. I’d think the eyes should be green, if nature is trying to protect the bug as a whole…. What could be better than green? Who designed these bugs?”

“Stay tuned,” said the BugLady – “this could turn into an episode.”

The explanation turns out to be steeped in Physics and Biochemistry, and both are languages that the BugLady spoke briefly, a long time ago, and not well.

Quick and dirty (and vocabulary-dense) review of insect eyes and vision: 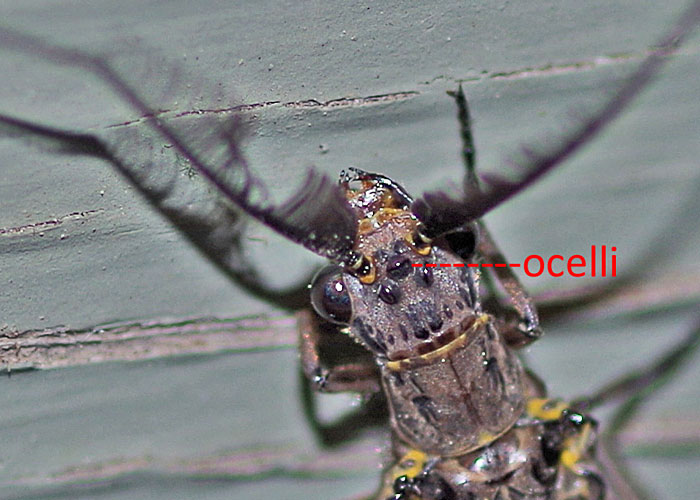 Many insects have two kinds of eyes – simple and compound (all insects with compound eyes have simple eyes, but not all insects with simple eyes have compound eyes). Simple eyes – ocelli (singular – “ocellus”) are “stand-alone” eyes made up of a lens, photoreceptors/sensory cells, and a connection to the ocular nerve (there’s a second kind of simple eye that’s restricted to the larvae of insects with complete metamorphosis, but we’re not going there). Ocelli detect motion and light (including UV light) but do not transmit images. Most insects have one to three of these simple eyes, and insects that spend a lot of time on the wing have larger ocelli.

Compound eyes are essentially a bundle of narrow, wedge-shaped tubes called ommatidia (singular – ommatidium – from the Greek for “little eye”) packed together like sardines. The eye of an insect that lives in the dark in the soil may have fewer than 25 ommatidia, and a single eye of a Common Green Darner has 28, 672. Each has a lens/cornea whose outer surface is called a facet, photoreceptors, and a transparent, crystalline cone surrounded by pigment cells that separate it from its neighbors, and a nerve axon. As with human eyes, information from each eye is resolved into a single image in the brain (right-side-up, in the case of insects).

A pair of eyes that is arranged symmetrically on each side of the head is called dichoptic; dichoptic eyes that are so large that they meet on top of the head (like some dragonflies and beetles, and the males of some flies) are called holoptic, and they allow “wrap-around” vision. Different visual needs – nocturnal vs diurnal; predator vs prey, aquatic vs terrestrial, landlubber vs aerialist – require different numbers and sizes of ommatidia (your Scrabble game is improving already!).

Some predaceous insects (robber flies, mantises) may have larger ommatidia on the top portion of their eyes than underneath (it’s called an “acute zone”), which provides some depth perception. Many dragonflies have two acute zones – one to enhance forward vision and the other for upward vision, and a dark area on the top of a dragonfly’s eye may act as sunglasses or may enhance upward vision. In fly species with gigantic eyes, an acute zone makes him more far-sighted, equipping him to recognize a female of the species before she can even see him!

A word about pigment cells. The types of pigments present in the eye determine what colors an insect sees; insects that have two or more different types of pigment cells can see in color, and many can see the same colors that humans can (though reds and oranges are not their strong suit). Some insects, in fact, can distinguish colors that humans cannot. Crepuscular insects (active at dawn and dusk) may have larger facets and may collect light over a longer period before transmitting, like selecting a slower shutter speed and wider aperture on a camera in dim light. Nocturnal insects don’t need color vision; their ommatidia are similar in structure to those of diurnal insects, but they function differently, sharing light with near-by ommatidia instead of hogging it. 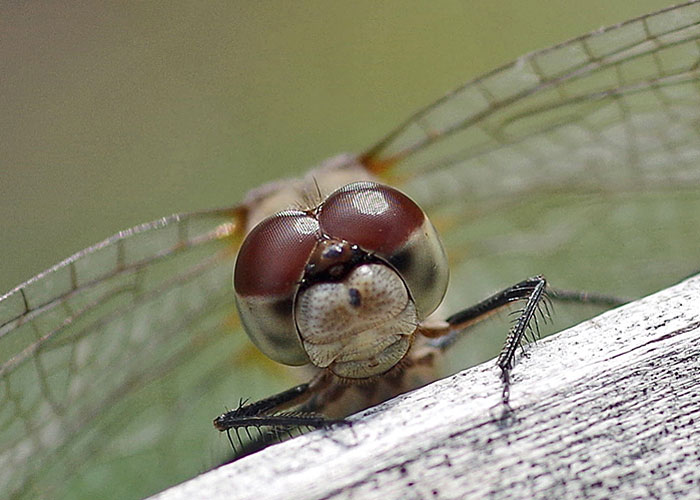 What does life look like through a compound eye? Not like a bunch of little hexagons, each showing a complete image. As the “askabiologist” website asks “Why would an insect need to see one image multiplied by a hundred?” Instead, if you looked at an elephant through a bank of paper towel tubes, each would deliver to your brain a slightly different piece of the whole image in front of them. The domed shape of a compound eye puts each ommatidium at a slightly different angle than its neighbor; the more ommatidia there are, the sharper the image is. Insect eyes don’t “focus,” but compound eyes are great for picking up motion. One source calls them “near-sighted.” To see through a compound eye, watch video.

So far, so good, albeit not so “quick and dirty.” Now – into the deep end of the pool (without a personal flotation device).

The structure within an ommatidium that “sees” is called a rhabdom, and it’s comprised of photoreceptor cells and surrounded by pigments that are stimulated when light enters a lens. For a no-holds-barred discussion of ommatidia, watch the video and read this article.

The “How” of it is this: eye color is the result of something called screening pigments in the rhabdom, but the color may be enhanced by a pigment/reflective layers in the lens itself that render a color metallic. Most insects’ eyes are dark because they have a lot of dark screening pigments.

The “Why” of it is something else again, but there are some guesses. The green colors in a horse fly’s eye may filter out some environmental colors before they hit the rhabdom, limiting the information that each ommatidium needs to process, rendering the green background neutral and spotlighting another insect. The eye color may also be a part of courtship.

Or – you could just look at the pictures (there’s some terrific macro photography going on out there):

and a nymph with a conspicuous eye – Hopper Nymph ID – Stictolobus subulatus.

and this really spiffy bonus fly . 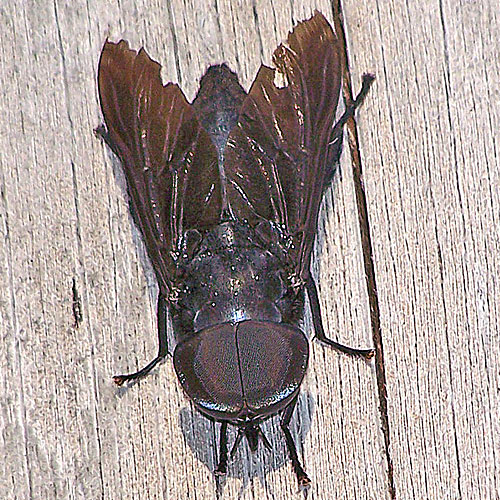 And yet (and yet) many flies and other insects, like the Black horse fly, have eyes that are neither colored nor patterned (Check BugGuide page), which begs the question – if pretty eyes benefit some insects, why doesn’t everybody do it?