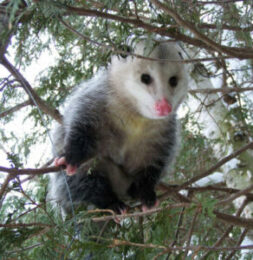 The other night, the BugLady’s cat started pacing back and forth on the window sills, peering out and yowling.  The BugLady turned on an outside light and saw a possum under the bird feeder (which is great, because they clean up the sunflower seed the squirrels spill by day).  The cat barely looks at the six, chunky squirrels he sees on the feeder by day, but possums and stray cats really get him going.  Today’s BOTW is revised from an article that she wrote for the newsletter of the Friends of the Cedarburg Bog in the spring of 2014.

Possums/Opossums/Virginia opossums (Didelphus virginianus) are often referred to as overgrown rats, which is totally off the mark, taxonomically speaking.  Not rodents, they are marsupials, distantly related to kangaroos.  Remarkably adaptable, generalist omnivores, nomadic, and mainly nocturnal, possums are at home everywhere.  They are increasingly successful urban and suburban dwellers, but their preferred habitats are woodlands and farmlands with water nearby, and they are good swimmers. 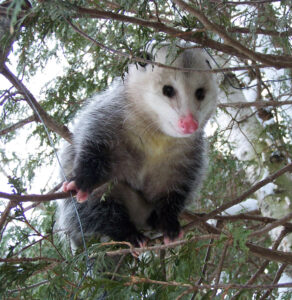 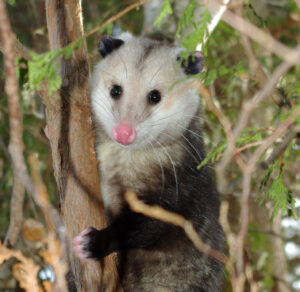 What’s in a name?  The Algonquins called them “aposoum,” meaning “white animal.”  That word was corrupted by Captain John Smith, who called them “opossums.” In 1608, Smith wrote that, “An Opassum hath a head like a Swine, a taile like a rat and is of the bignes of a Cat. Under her belly she hath a bagge wherein she lodgeth, carrieth, and sucketh her young.”

No story about opossums would be complete without an account of their remarkable spread throughout North America.  They originated in Central America, and by 1492 had established themselves across the southeastern quadrant of the US.  They moved north and west as the settlers cleared the great forests and made roads (they were undoubtedly less prone to becoming roadkill in the horse and buggy days).  They probably reached Wisconsin before statehood, and their populations increased dramatically in the 1900’s.  Today, opossums live in much of the country east of the Rockies, and they’re also found along the Pacific coast, where they were introduced.

They shouldn’t be here.  These are southern animals whose coats are not well insulated and whose hairless ears and tail-tips freeze and crack.  They’re not equipped physiologically to hibernate, though they do retreat to winter dens and sleep for several days at a time without the true hibernator’s drop in body temperature.  Then they must forage for food. 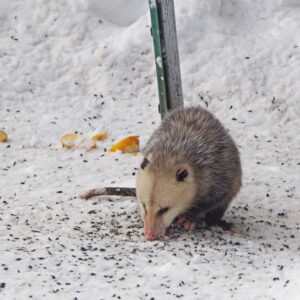 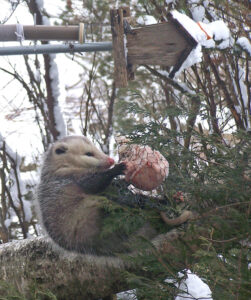 Fortunately for them, food is everywhere.  As “opportunistic omnivores,” they’ll eat just about anything they find – fruit, insects, frogs, slugs, garbage, and dead animals, aided by an extra-efficient immune system that is typical of carrion eaters.  Cars, dogs, coyotes, Great Horned Owls, hawks and winter weather take their toll on possums, and so do humans, who hunt and eat them, (caveat emptor – possums are host to a couple dozen kinds of internal parasites).  Some cultures believe that their meat has medicinal properties

They are relatively unaffected by the bites of rattlesnakes, and they rarely transmit rabies (their body temperatures are too low to entertain the virus).  Possums seldom live more than two years.

An alarmed possum may show all 50 teeth (which is a lot of teeth for a mammal), hiss, growl, or run away, but they’re famous for “playing possum,” an involuntary response to great stress.  The “dead” animal curls up with eyes half-closed, stiffens, bares its teeth, salivates, and releases a bad-smelling musk and some green poop, any or all of which is enough to discourage most predators.  This catatonic state may last for minutes or hours, until twitching ears signal that the opossum is reviving enough to monitor its surroundings.

Typical of marsupials, opossum young have a short gestation period (about two weeks) and are tiny and embryonic-looking when they’re born.  At birth, a honeybee-sized opossum must find its way to the female’s pouch, using its muscular front legs to crawl across her belly.  She may bear as many as 25 young, but most don’t make it to her pouch, and the usual litter is about seven.  Those that do will stay there for the next two or three months until they are mouse-sized, and they ride on their mother’s back after they leave the pouch. 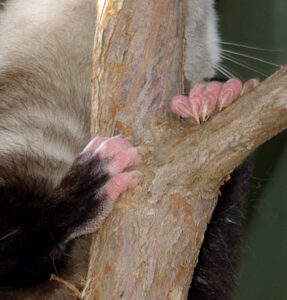 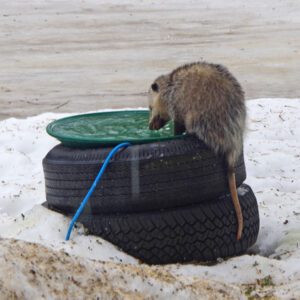 Males don’t assist with the child-rearing, and females are fairly indifferent to their young after they have emerged from the pouch.  According to the folks at the Animal Diversity Web (who post some great, comprehensive biographies of lots of animals) females often lick the outside of their pouch when the young are in residence, which led to the folk belief that “Virginia opossums breed with their noses and afterward, the young crawl from the female’s nostrils into her pouch.” 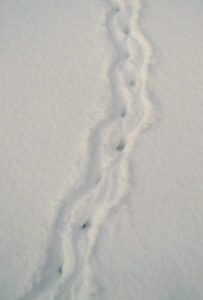 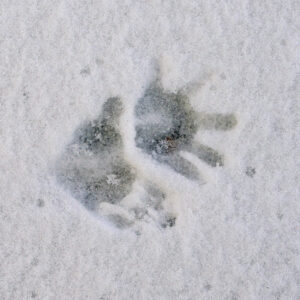 Opossums have prehensile tails that they use for balance while running, as a fifth hand while climbing, and for carrying leaves and grass back to their dens.  A young animal may hang by its tail briefly, but adults are too heavy.  They also have opposable thumbs.  The BugLady loves finding their tracks in the snow – the star-shaped front paws and the wide-bodied, low clearance sashay through deeper snow, complete with tail drag.

Oh yes – about this one picture.  The BugLady used to get a deer rib cage from a local hunter and install it on the crossbar of the swing set.  Instant suet feeder.  The birds (and beasts) loved it.