The world has been rushing forward (personally, the BugLady is still wondering what happened to August), and it’s time again for the Annual “Twelve Bugs of Christmas” event (and, coincidentally, episode #350 in the series, by the BugLady’s numbering). Here are a (Baker’s) dozen insects that will not be getting (or who have already had) their own BOTWs. Feel free to hum along, and have a lovely Holiday.

Eastern Forktail Damselflies (Ischurna verticalis) are one of our earliest and latest-flying damsels. They oviposit in the leaves and stems of aquatic vegetation. This one was sitting on/near some floating mats of carnivorous Common bladderwort plants, whose stems suit her purpose perfectly, but whose bladders will consume some of her tiny young when they hatch. 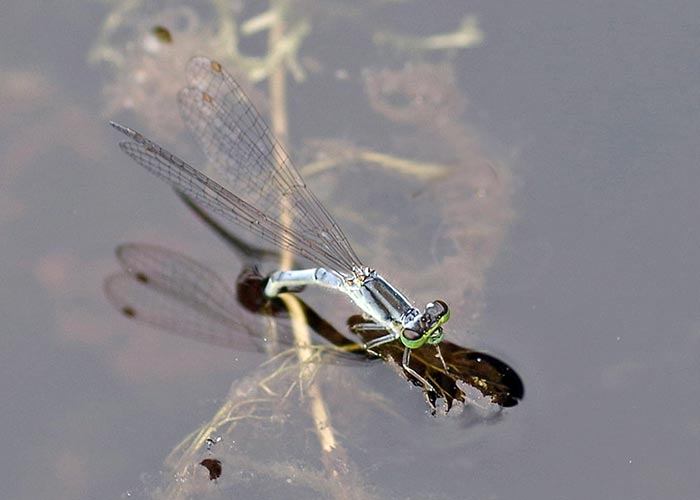 The BugLady found this Black Swallowtail Pupa (Papilio polyxenes) when it was still a larva, hunched at the bottom of a stalk, and this is how it looked the next day. Black swallowtails have two broods per year; small males can be seen over the land in early spring and again, nectaring on red clover in high summer. This green pupa, offspring of the spring-flyers, will mature in a few weeks. Its offspring will overwinter as a seasonally-appropriate brown chrysalis. 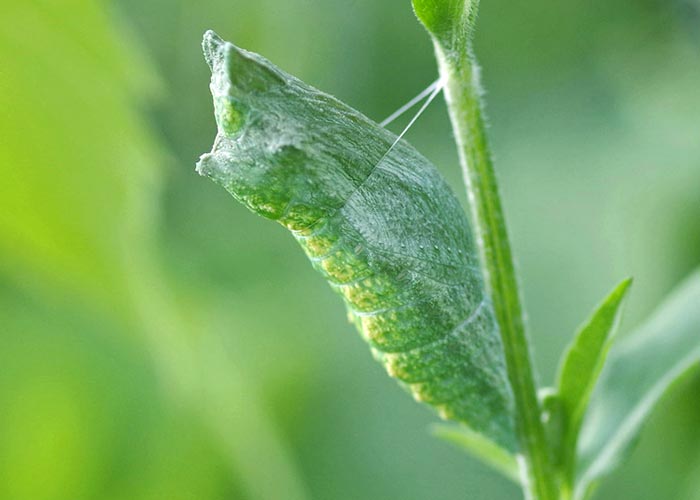 One day, when the BugLady was peering into a local pond, she spied pale strands floating in the shallows. “Never saw that before,” she said to herself, “I’ll just take a few ‘throwaway shots’ (a chorus of photographers sighs – “bad idea!”), and put them up on the screen and see what’s happening here.” What was happening was that Baskettail Dragonflies (Epitheca cynosura), which are so-named because a female carries at the tip of her abdomen a ball (“basket”) containing hundreds of eggs, were ovipositing. A female attaches her ball of eggs to a submerged plant or she drags/taps her abdomen along the water’s surface, unraveling the string as she goes. In either case, the once-compact egg mass swells into a long strand an inch wide and as long as several feet (“just add water”). If you look closely, you can see the lumps of eggs within the strand. Were the strands there when the BugLady went back the very next day? Were they, photographers? 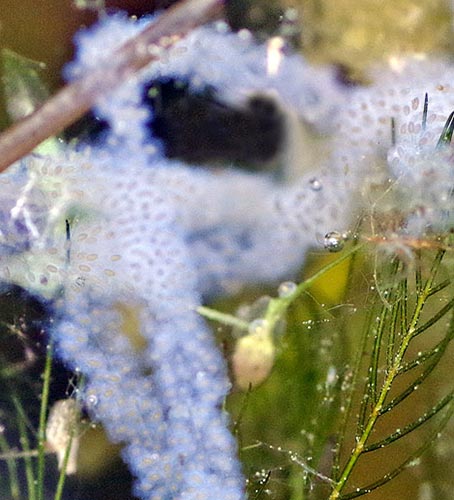 The small species of mayfly (right) emerges in the Bog by the thousands, covering the leaves of plants above which its aquatic young live. Adults do not eat. The Podabrus soldier beetle (a lightning bug mimic) is a predator. Legs have been shed. 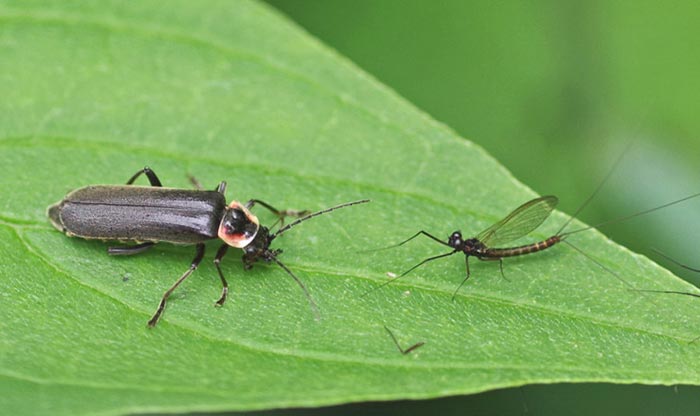 BugFan Ron called the BugLady in the beginning of October to ID a mega-caterpillar, which turned out to be a Pandorus Sphinx (Eumorpha pandorus) (thanks again for the tomatoes, Ron). Sphinx moth caterpillars are collectively known as “hornworms,” for the impressive, curved horn on their final segment. Some species, like the Pandorus sphinx, lose the horn before their final instar, replacing it with a “button.” PS caterpillars come in bright green, olive, orange, cinnamon, and almost purple, and there’s variation in tint among the moths, too. Bugguide.net calls them “an extra-spectacular sphinx moth.” 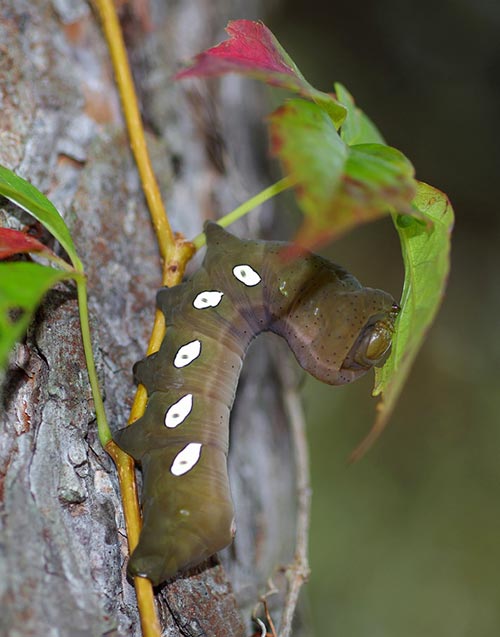 Away in the manger? The shiny-looking little structure on the underneath of a hazelnut leaf is an egg mass left behind by a female Zelus Assassin Bug (Zelus longpies). When the BugLady turned over a new leaf trying to get a shot of one, she found it covered with recently-emerged, tiny, translucent baby Zeluses (Zeli?) (Zelus luridus is a common species in God’s Country). Maternal care is uncommon insects overall, and paternal care is practically unheard of, but in some species of Zelus, it’s Dad who sticks around and guards the egg mass. Mom DID leave a gift for her young. According to Eric R. Eaton’s Bugeric blog, Zelus is aided in catching its prey by myriad small hairs on its spindly legs, hairs that are covered with sticky stuff that is produced by glands in the exoskeleton of the legs and spread onto the hairs deliberately (hence the name “sundew assassin bug”). How do the babies get gooey? Mom covers the “manger” with sticky stuff that repels predators while her eggs are on the inside, and the newly-emerged nymphs rub their legs in the glue, and off they go.

This Whiteface Dragonfly (probably a Dot-tailed whiteface, Leucorrhinia intacta) was recently-emerged and still stretching out its wings, and it was really glad that the BugLady couldn’t see it, because it couldn’t quite fly. Newly-emerged Odonates, called tenerals, are soft of body, pale in color, and sexually immature, situations that are rectified within a few days to weeks. Their temporarily pale color deflects aggression by courting males before the tenerals are ready to go to the party. 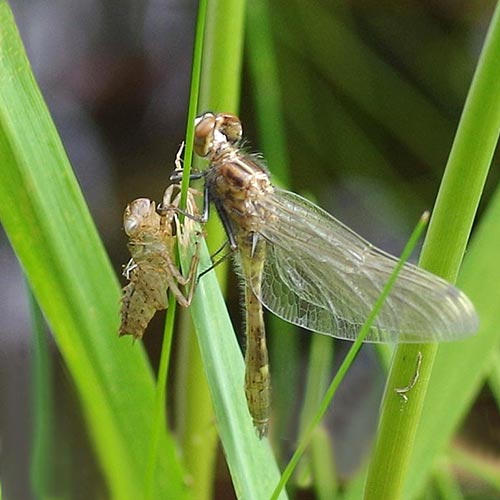 Glowing burnt sienna like the autumn leaves around it, an Eastern Comma Butterfly (Polygonia comma) enjoys a moment in the newfound sun of the forest floor. It’s one of several anglewing butterflies that, along with the Mourning cloak, will overwinter as an adult, the glycogens in its blood working like antifreeze to keep lethal frost crystals from forming in its cells. Anglewings and morning cloaks sometimes leave their hibernacula during January thaws and in maple tapping season. 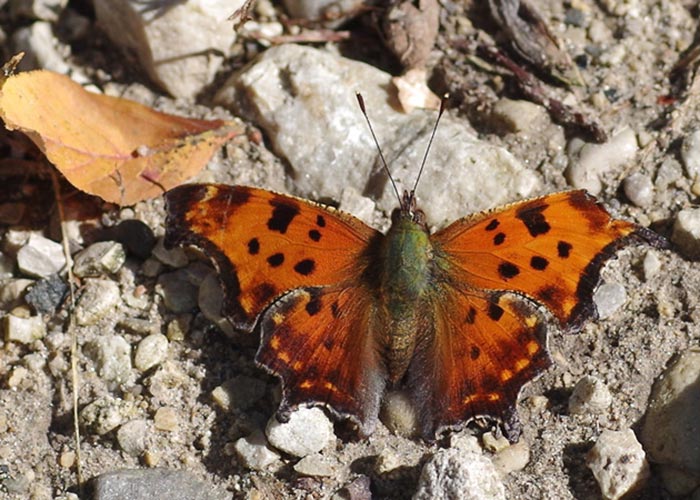 The BugLady spent much of spring taking artsy shots of non-flowering plants. She has long chuckled at the irony of looking at a computer monitor to see what she has just seen (she recently heard of a scientific study in which the memory capacity of people who habitually used cameras to record their surroundings was compared with those who observed life camera-free). A mini-world of mosses and lichens? Beautiful. Two springtails wandering through the scene? Priceless! 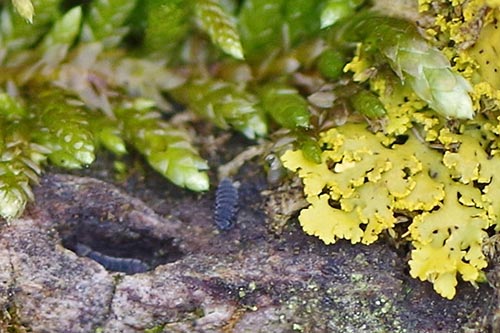 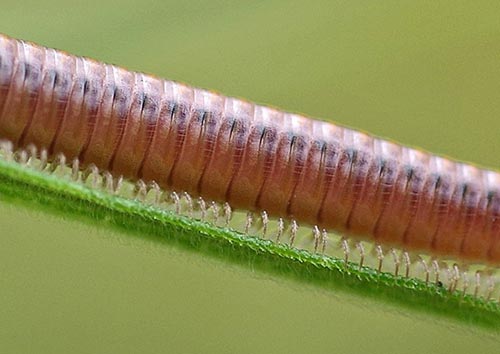 As a rule, dragonflies oviposit into aquatic leaves and stems or into open, water, but the BugLady rarely sees the ubiquitous White-faced Meadowhawks (Sympetrum obtrusum) near water. So, she did a little reading and found out that while some species of meadowhawks do oviposit over water, other species take a huge gamble where their offspring are concerned. They drop their eggs, each encased in a dry membrane, onto earth in a spot that looks like it’s going to hold water come fall or spring! There are many accounts of meadowhawks ovipositing on lawns. The BugLady was in a low, sand scrape near a pond at Forest Beach Migratory Preserve (a grand place to stalk dragonflies) when she saw this tandem pair of White-faced meadowhawks bobbing up and down in the vegetation, just like dragonflies that manoeuver over water. She assumes that on the downward bob, eggs were released onto the sand. 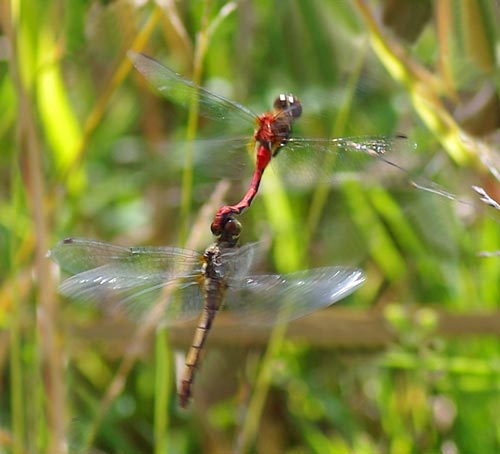 And, finally, a Merry Mystery. It was a dark and stormy night in mid-August, and the BugLady was photographing this interesting, sable-colored moth on her front porch. The moth was a little above her head, so she was shooting at an angle. When she checked the screen see if the moth was in focus, she noticed the tiny interloper. Was it there when she got the camera right back up? Photographers? 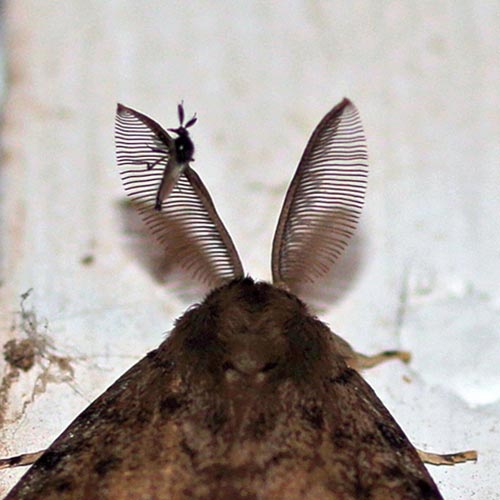