With apologies to Olde English Folk Songs everywhere, here is the Second Annual Twelve Bugs of Christmas, featuring a Baker’s Dozen that were photographed this year but that did/will not appear in BOTWs. These pictures are a tribute to the joy of stumbling into the right place at the right time. If such a thing is even possible, the collection may be a bit “dragonfly-heavy.” Sing along. Tap your foot. Or not. “On the First Day of Christmas, the BugLady gave to me…”

The long drought is over. “Getting a good shot of a Common Green Darner” has been on the BugLady’s wish list for years. Instead of bursting from the grass and flying away snickering, this lovely young lady posed patiently (albeit against a background that the BugLady would not have chosen) as the BugLady crawled around on her hands and knees, changing lenses, humming a little. 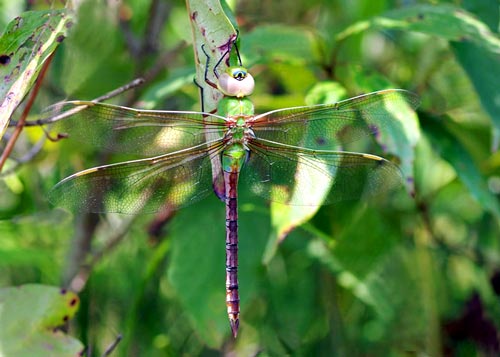 Adult masked hunters are fearsome predators in the Assassin Bug bunch who pack a hefty wallop with their stabbing/piercing mouthparts. Not, from what the BugLady reads, an encounter one soon forgets. Masked Hunter nymphs, like this one found recently in a stack of handkerchiefs, travel around incognito, their sticky exoskeleton covered with grit that attaches from their surroundings. The BugLady wishes she could report that this wee bug had trouble encountering enough dirt in her house to disguise itself. 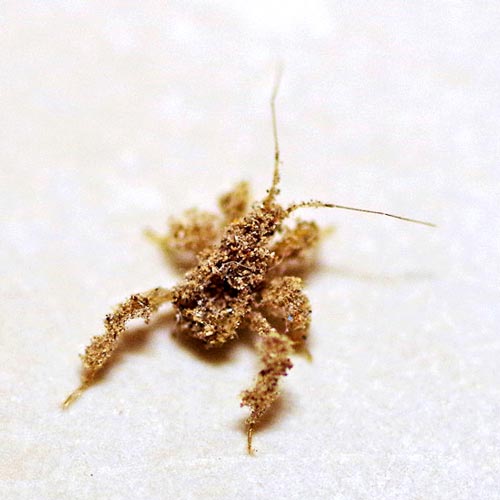 Has the BugLady mentioned that she thinks Crab Spiders are terrific? 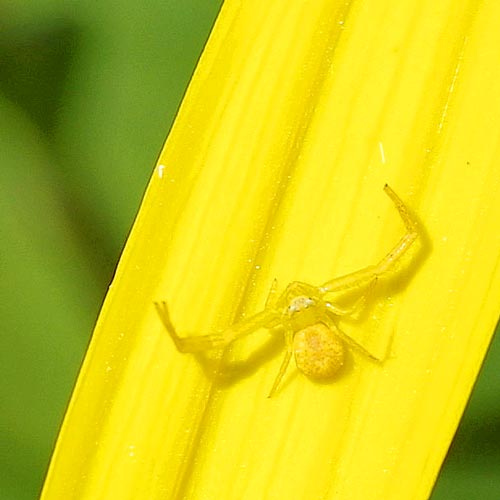 Immature insects molt by climbing out of their rigid skins; they leave behind the empties (exuviae), tiny molds that record the creases on their joints and the facets of their compound eyes, and then they expand their temporarily-soft exoskeleton by pumping in air or fluids before it hardens. A technical explanation for a miracle of Nature. 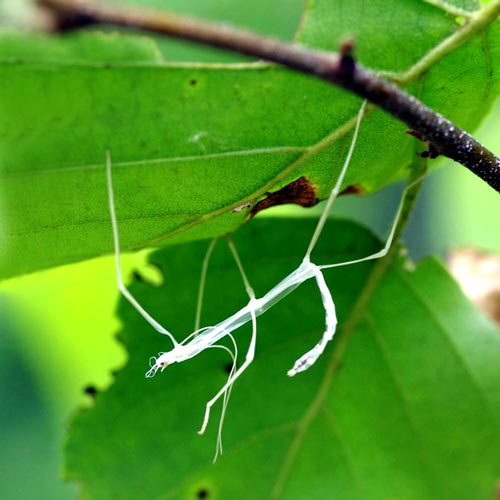 Most of the BugLady’s photo-editing is pretty basic—crop and contrast, and then, because she takes pictures deep in the vegetation where the very air is green, adjust the white balance. Every once in a while, she dabbles in Photoshop—here a blameless fairy shrimp treated with the “difference clouds” filter emerges as an ET. Or something for the top of the Christmas tree? 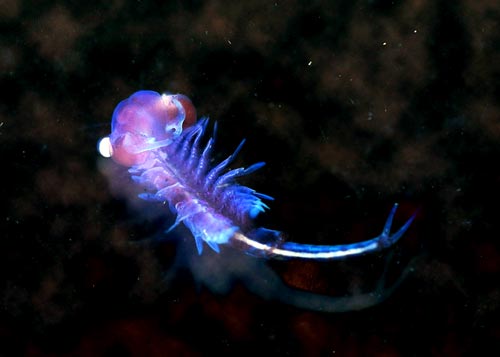 Variegated meadowhawks head north and east through Wisconsin in spring and then again in fall. This exquisite, newly-minted juvenile female was photographed in mid-July. 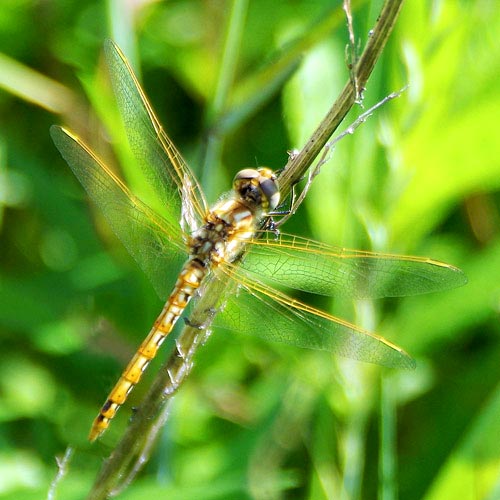 There is a time in late summer when a walk through the field triggers the annoyed buzz of these big Promachus robber flies, flushed from their grassy perches. When they are otherwise occupied, they become approachable. 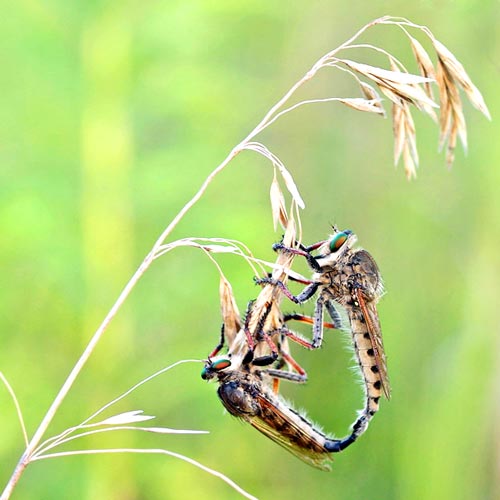 For the record, slugs do not chase grasshoppers. Well, not very fast. 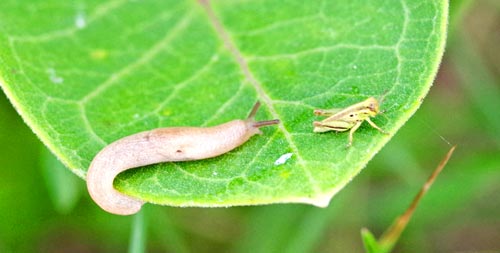 The BugLady had no idea who this was when she was photographing it, only that she’d never seen it before. This striking juvenile male slaty skimmer surely doesn’t look like his equally-awesome Old Man.

Who can forget the voracious lacewing nymphs that nibbled their way through the aphid colonies on Cup plant this summer? Equally blood-thirsty adults graced the milkweeds in good numbers later in the season, but this one posed for a Christmas shot in red and green. 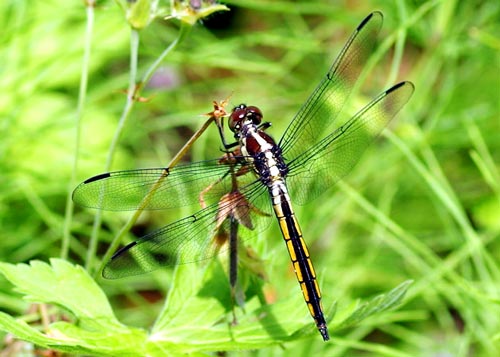 Looking for an insect fix in the waning days of winter? Check the specks that are cavorting on the snow and on BugFan Jim’s driveway as the temperatures get above freezing. 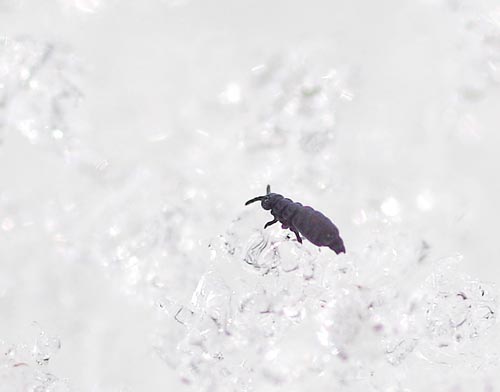 The BugLady checks on bugs that are sitting way too still. This creepy ornament, a Carolina locust, was left dangling long after its predator (Crab spider? Ambush bug? Brain-altering parasite?) strode off into the sunset. 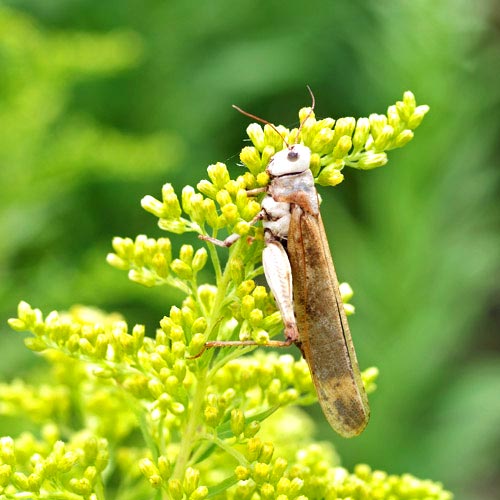 What child is this? The BugLady, wondering about a small “green stick” on a water lily leaf, zoomed in and discovered this brand new damselfly, the recently-aquatic inhabitant of the vacated exuvia to the left, which was in the process of changing atmospheres. 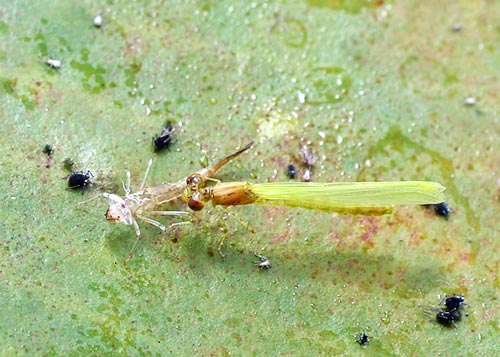