In a recent BOTW we visited some “Classic” Katydids. In today’s episode—“Tettigoniidae Two,”—we meet three long-horned grasshoppers that were struck from different molds.

Conocephalus sp. are found in grassy fields and open areas. They are daytime singers, preferring sunny days, and the male will produce his love song of ticks and buzzes from the grass-tops. As expected, each species has a unique song pattern, but they are slaves to the vicissitudes of cold-bloodedness. The song’s tempo depends on how warm its singer is, and a typically fast-paced song rendered sluggishly due to the cold may be confused with a slow-paced tune sung on a hot day. The awesome Songs of the Insects by Elliot and Hershberger (which includes a CD) describes Meadow Katydid songs as ticks, buzzes, rattles, shuffles or purrs, like a shaker full of rice or sand. 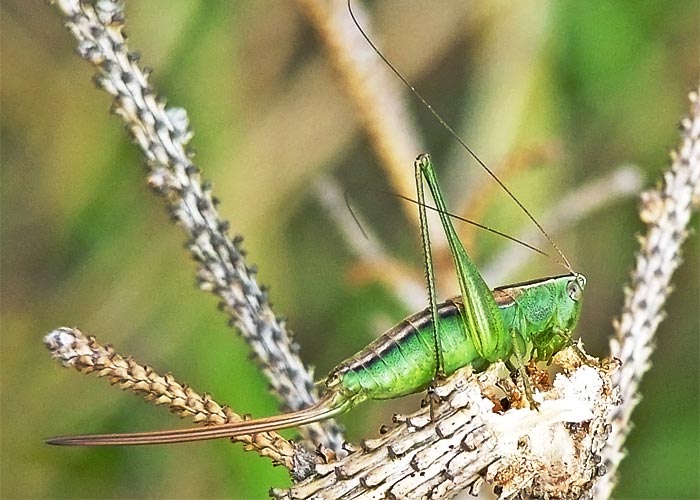 These are colorful katydids; many sport patches of red, blue, orange or yellow on their persons. The BugLady believes that this is a Straight-lanced Meadow Katydid; a species named for the female’s ovipositor. The male of the species is famous for his extreme flexibility and is often called the contortionist of katydid world. There are 39 species in North America.

Atlanticus sp. are flightless (short forewings are present in some, but not flight wings), ground-dwelling insects that live in low vegetation and weedy fields and resemble crickets more than katydids. With their drab earth tones, they are well camouflaged. This specimen is a female, as demonstrated by her hefty ovipositor. Depending on whose book you read, the fierce-looking shieldbacked katydids eat plant material and are harmless, or they are predators of and scavengers on other insects and can deliver a painful bite when handled. 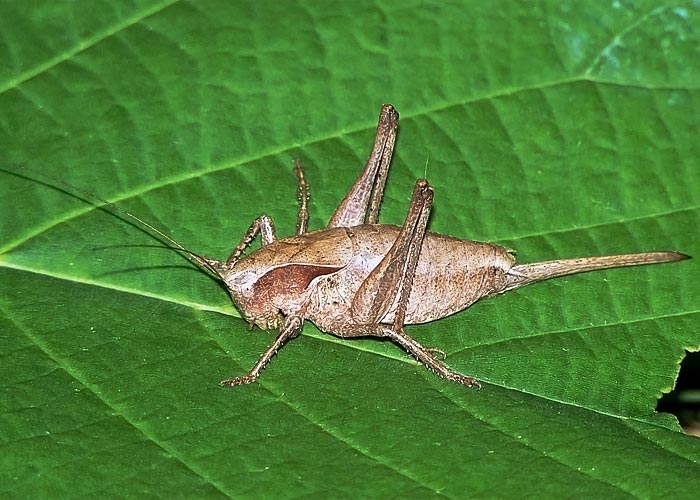 Eggs overwinter in plant tissue or soil and the nymphs hatch in spring. Shieldbacks are the first katydids to appear as adults; the males begin to sing in mid-to-late June. Their songs are alternating periods of trill and silence, in equal amounts, and may be so high-pitched that some people can’t hear them. There are 123 sp in North America, but only 10 occur in the East; this may be the Short-legged Shield-back (aka Protean) Katydid, Atlanticus testaceus. Mormon Crickets, of Salt Lake City/1848/California-Gulls-saved-the-Mormons fame are not true crickets but are 2 ½” long, flightless, shield-backed katydids.

These superb insects (close to 3” long) are in the genus Neoconocephalus (The BugLady has been hearing the term “Neo-con” on the media and is delighted to discover what it refers to). 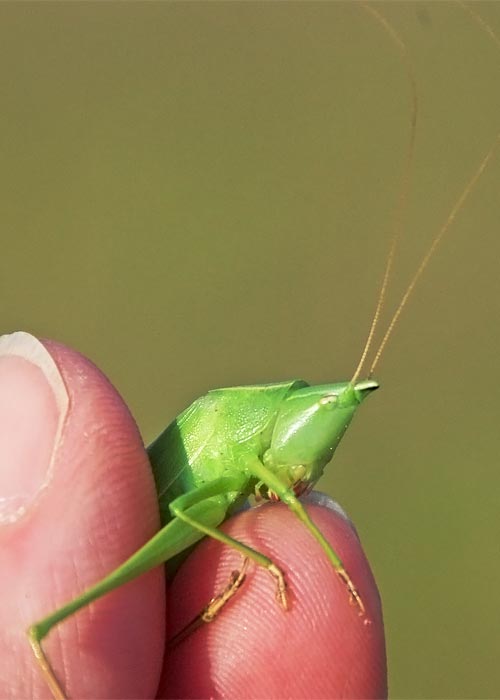 The BugLady has always wanted to see one of these Saturday Night Live wannabes; the tan one was attracted by her porch light in August of 2008, and the green one was avoiding her lawn mower a month later, so she undoubtedly has been surrounded by them all along. This is (possibly) a Sword-bearing Conehead (N. ensiger), which ranges from the Dakotas to the Atlantic to the Mason-Dixon Line. The BugLady’s frequent “hedging” of her identifications stems from her belief that both the photographer and the photographee should walk away from the portrait experience unharmed and not be collected for future classification. At any rate, the female’s sword-like ovipositor can be seen in the rose-beige individual. Most conehead species entertain a green and a tan color phase, and it is speculated that this prevents their predators from forming a consistent search image. 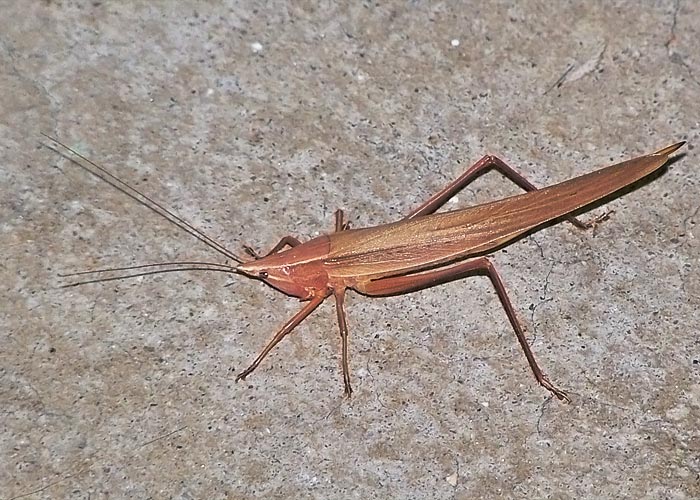 Coneheads reside in weedy fields, tall grass, shrubby edges and brushy cover, and many are found near water. They are strong fliers that eat primarily grass seeds and can “bite hard.” Male Sword-bearing Coneheads call at night, a song that Elliot and Hershberger describe as a “rapid train of brief, raspy notes given at a rate of five to ten notes per second, depending on the temperature.” They go on to say that S-b Cs do not, alas, make good pets because their calls are too loud and penetrating. There are about 20 species, mainly eastern, with awesome names like, the Robust, the False Robust, the Cattail, the Hook-faced, the Round-tipped, and, best of all, the Slightly Musical Conehead. 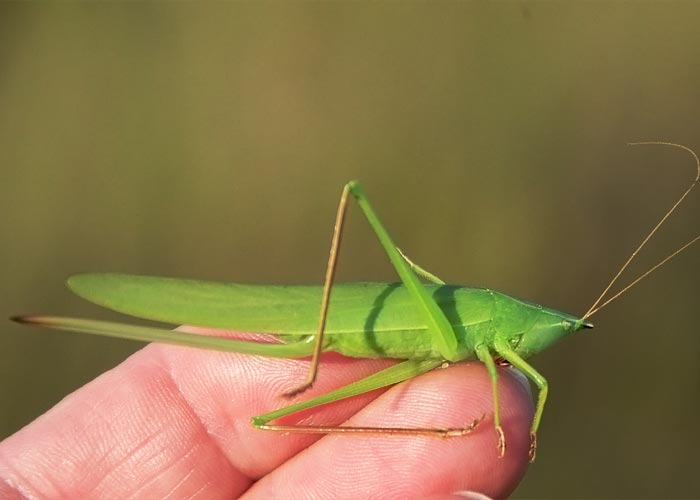