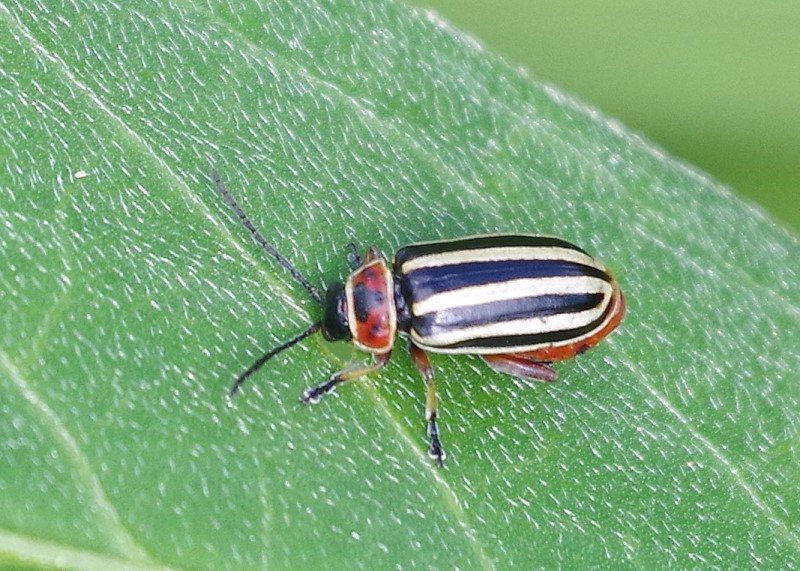 Sometimes, the BugLady gets a surprise as she’s researching an insect, and that was the case this week.

She saw a cluster of these pretty beetles when she was on a boardwalk in a wetland. Their pedigree? They are leaf beetles in the huge family Chrysomelidae; within that family, they’re in the tribe Alticini – the flea beetles, and they are (probably) Disonycha procera (Disonycha means “double-clawed”). There are 470 members of that tribe in North America, and more elsewhere. The BugLady has photographed one other, equally pretty flea beetle species when it was feeding on her pussy willows.

Disonycha procera is very similar to Disonycha pensylvanica (not a typo, simply an old misspelling that is now embedded in the taxonomy of a few species), and in fact, it is in the “Disonycha pensylvanica species group,” about which the Bugguide website says, “The three species of the D. pensylvanica- group are not always safely identified – last hope is male genitalia, in some cases.” So the BugLady has repaired to her well-worn seat, far out on that taxonomic limb, and is calling it Disonycha procera. Only one source gave it a common name, but there was no explanation why this small insect might be called the Tall flea beetle.

The BugLady couldn’t find much about their life history. The Bugguide website says that you can find both adult and larval Tall flea beetles feeding together on host plants, and a write-up about another genus member said that it overwinters as an adult, wakes up in spring, and lays eggs on or near the host plant, and the BugLady assumes that the Tall flea beetle does the same.

Many Chrysomelids are attached to and named for their specific food plants, and for some flea beetles, those plants are agricultural crops like spinach (the Spinach flea beetle), beets, eggplant (the Eggplant flea beetle), and cruciferous plants like broccoli, cauliflower, cabbage, kale, (the Crucifer flea beetle). But some Disonycha beetles eat invasive plants like Leafy spurge and are considered beneficial. Adults chew holes in various parts of the plants – stems, leaves and petals (they like to feed in sunny weather) – and larvae may feed on the undersides of the leaves or on roots. Tall flea beetles feed on plants in the genus Polygonum – knotweed, smartweed, bindweed, and tear-thumb (and it would be nice if a whole bunch of them would gang up on the very invasive Japanese Knotweed).

Some Flea beetles shelter in the soil during bad weather and emerge when the rain quits and the sun is out again. In Germany, this has earned them the name Erdflöhe (earth flea). 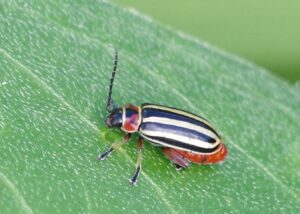 So, here’s the funny thing about the Tall flea beetle. Flea beetles (tribe Alticini) are so named because they jump around (like fleas) when they’re disturbed. The BugLady certainly didn’t see any jumping – they were about as staid a bunch of beetles as you could hope to find – and she couldn’t find a video of it. In this jumping they are aided by disproportionately large hind legs (all the better to jump with, my dear), though they get around routinely by walking and flying. There are jumpers in a few other groups of beetles, too, like the weevils, Buprestids (jewel beetles), and marsh beetles.

Flea beetles jump using particular tendons that act like springs when initiated by the tensing and release of the leg’s extensor muscles. Quoting two other researchers’ work in their paper, Nadein and Betz said that “They suggested that the high take-off acceleration, high velocity and short take-off time are compatible with jumping based on a spring-driven mechanism.” Another group of researchers likened the movement to a catapult, and they based their design for a bionic jumping leg on the beetles’ anatomy (don’t ask the BugLady to explain anything more about this, but she can share links to a few articles).

Monarch butterflies are nearing their destinations. The BugLady will be interested in the numbers on the wintering grounds this year – Monarchs were scarce here this summer.