BugFan Marjie says that, on the bright side, she hasn’t gotten any bug bites recently. That would be an interesting poll to take – bug bites vs below zero temperatures. Anyway, the BugLady has been busy cooking and eating and washing dishes [repeat as needed], so here’s a slightly modified rerun from the spring of 2012. 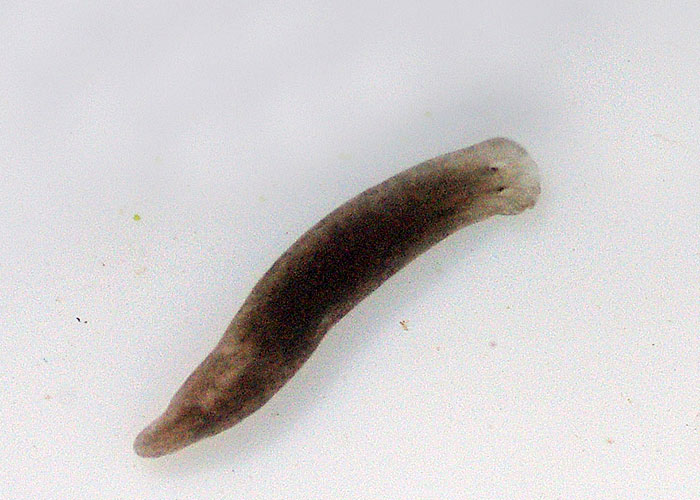 Among the critters that the BugLady has been seeing in the Ephemeral Pond lately have been a variety of flatworms that are generally called planarians. The majority of members of the phylum Platyhelminthes (the flatworms – a phylum that includes the notorious tapeworms and flukes) are parasitic; planarians are labeled the only “free-living” (non-parasitic) flatworms in the bunch. Planarians are easily overlooked, but amazing, critters. Although they have only primitive brains, planarians can learn; some have green thumbs; and because of their super-powers, they may have a leg up on this “immortality” thing.

OK – maybe not bugs, except for BOTW purposes.

Here’s the technical bit – within the phylum Platyhelminthes is the class Turbellaria (the non-parasitic guys). Most turbellarians are small – less than an inch long – and many are microscopic. Class Turbellaria is broken down into several orders, some of whose members only live in salt water, but two orders of flatworms that live in fresh water are Tricladida and Rhabdocoella. Tricladida have fancy, three-branched “guts” (gastrovascular cavities) and are referred to by those in the inner circles as triclads or planarians, while Rhabdocoela have simple “guts” and are called Rhabdocoels or, loosely, planarians. Flatworms are not related to segmented worms like earthworms and leeches, though they are often mistaken for leeches.

Turbellarians live in all kinds of water – moving, still, ephemeral, warm, cool and downright cold – and a few hang out above the water line on damp mosses. North America is home to about 200 species of these free-living freshwater flatworms. Triclads prefer running water because they require high levels of dissolved oxygen; rhabdocoels can tolerate low-to-non-existent oxygen levels, which allows them to thrive in ephemeral ponds. So the BugLady, whose flatworm identification skills are limited to “Look! There’s a planarian!” assumes that she’s been photographing ephemeral pond rhabdocoels. 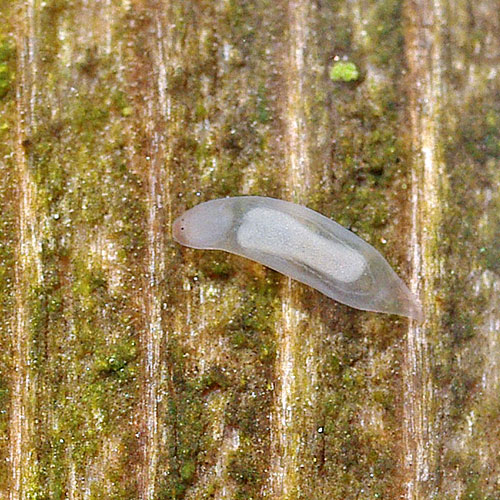 A generic flatworm is small and flat because it doesn’t have lungs or blood vessels to circulate oxygen and nutrients – when stuff simply diffuses through your body, you just can’t afford to grow very big, or thick, or complex. It is bilaterally symmetrical – its right side matches its left side. While some marine flatworms are pretty flashy, their freshwater cousins tend to be drab, camouflaged among the aquatic plants and the debris on the pond or stream floor. Many species have a recognizable arrow-shaped head with pointy flaps that stick out like tiny ears, and two spots that look like crossed eyes. The mouth is located at the tip of a small, hose-like tube (the pharynx) that tucks into the gastrovascular cavity in the middle of the flatworm’s underside. Food enters, and wastes exit, through the same tube. It breathes through its outer covering (epidermis).

A turbellarian’s outside, especially its underside, is covered with fine, hair-like cilia. Moving from Point A to Point B involves producing a layer of mucous that covers the body and then using the movements of the cilia (and muscle waves in larger specimens) to glide along on underwater surfaces, like a snail. Like a snail it can also move, belly up, on the underside of the surface film of the pond, and some species use their cilia to swim. According to Voshell in A Guide to Common Freshwater Invertebrates of North America, “The scientific name Turbellaria came from the Latin word “turba” meaning confusion, crowd, bustle, or stir. This refers to the minute currents created in the water as flatworms wave the very small hairs on the bottom of their bodies to glide across the substrate.” Mini-currents set in motion by mini-hairs on mini-animals.

The nervous system is made up of some ganglia in the head (the “brain”) and a few pairs of branched nerves that run from tip to toe. With their eyespots, planarians sense tiny changes in the intensity of light (which they avoid). They seem to detect their food chemically – like sharks, they hone in on meat juices in their environment. They are sensitive to vibration, to temperature change, to currents, to smell, and to chemicals. Many rhabdocoels also have a few long, sensory cilia. 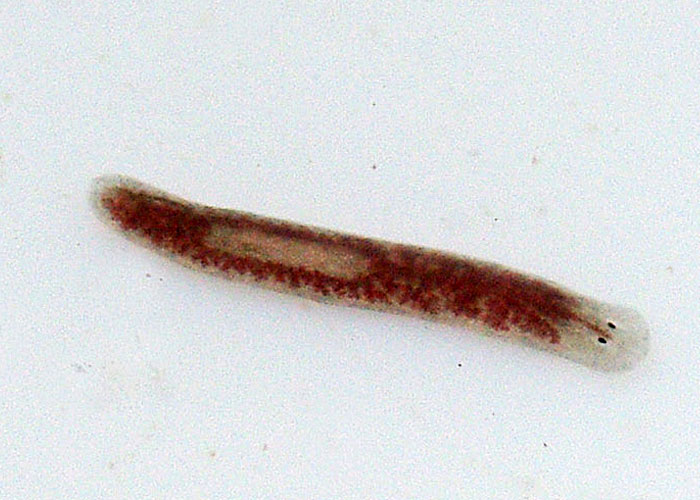 Most planarians are scavengers and carnivores (and cannibals). A hungry planarian settles above its food (dying or recently dead invertebrates), extends its pharynx onto the organic material and suctions fluids/soft tissues/tiny organisms into its “gut.” There are no digestive juices, but large (phagocytic) cells that line the gastrovascular cavity pick up nutrients which then diffuse through them into other cells in the animal. Some species of planarians secrete a strand of mucous onto the substrate and then roll it up and eat it, along with all the tiny algae, bacteria and single-celled critters that stick to it.

Planarians produce more planarians in two ways, and most species can employ both. Almost all planarians are hermaphroditic, with each individual having both male and female organs, but it still takes two to tango. They can form thin-shelled summer eggs that hatch in two weeks, and thick-shelled winter eggs that don’t hatch until spring. Young planarians emerge looking like mini-adults. Adults generally live a few months, but some can encyst themselves and survive the drought cycle of an ephemeral pond.

But planarians are famous for their asexual exploits – they can divide their bodies on purpose and can regenerate the missing end of each section, though they’re more likely to reproduce this way in warmer water temperatures. Many species, especially rhabdocoels, routinely form a progressively-narrowing constriction behind the pharynx which eventually separates them into two pieces, and each end then grows into a complete individual. Rhabdocoels often duplicate their internal organs before splitting. Scientists have demonstrated that if you chop a planarian into multiple pieces, most will regenerate (although the nearer each piece was to the head, the more successful the regeneration will be, suggesting that the chemical that drives this event is more concentrated fore than aft). Philosophers would say that because of this talent, planarians have achieved immortality, since a tiny bit of the First Planarian is, arguably, still in circulation today. 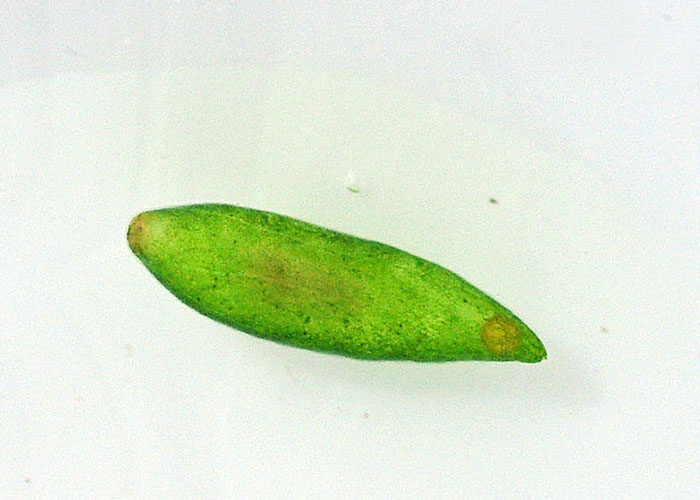 Using light and tiny electric shocks, scientists have “taught” or conditioned planarians to run mazes. If a trained planarian is cut in pieces, most sections “remember” the way through the maze after they’ve regenerated (but grinding up “trained” planarians and feeding them to other planarians does not transmit memory) (yes, it’s been tried).

The BugLady is completely enthralled by these small (4 or 5mm), bright green, totally astonishing ephemeral pond planarians. She thinks that these rhabdocoels are in the genus Dalyellia, possibly Dalyellia viridis, though some other genera get green, too. Apparently, the green color is due to algae that exist, grow, photosynthesize and reproduce within the planarian’s tissues. Planarians may ingest the algae and/or it may be a gift from their Mom/Dad, deposited in the eggs. Green planarians tend their gardens well – they are more sun-loving than their brown-gray-black-mottled cousins.

What’s the point? In this symbiotic relationship (a relationship that benefits both parties), the planarian “breathes” the oxygen that is produced by its algae during photosynthesis (half the oxygen it uses may come from its algae), and it probably helps itself to some of the simple sugars the algae make, too. (Fast Food?) Its built-in “oxygen tank” allows it to tolerate oxygen-deprived habitats. The algae use the CO2 and nitrogen products that the planarian gives off as a waste material, and BugFan Chris suggests that the algae also gain protection within this tiny, mobile greenhouse (planarians have few predators). Some algae-bearing planarians stop eating “outside” food. 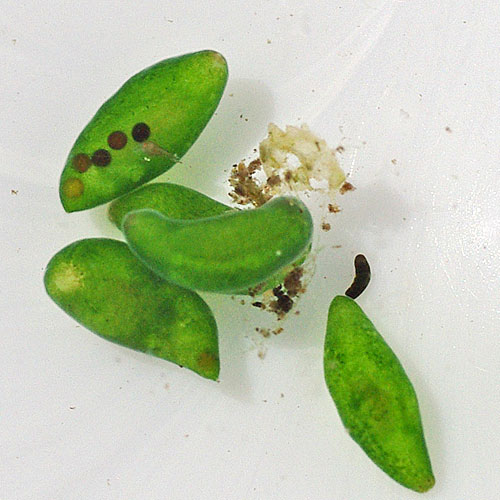 The spheres seen within the green planarians are eggs.

Some planarian trivia: the sperm cells of most species of planarians have two tails instead of the almost-universal single tail.

And what’s the odd background on the picture of the white planarian? A close-up of the seat of an Aldo Leopold bench, that’s what. Before this collecting trip, the BugLady’s ephemeral pond tool kit included nets and dishes and droppers and white plastic spoons. When she found this little guy, she had nothing to photograph it on (now she carries a black plastic spoon, too), so she slurped it up (gently) in a dropper and squirted it out on the darkish seat of a nearby bench.