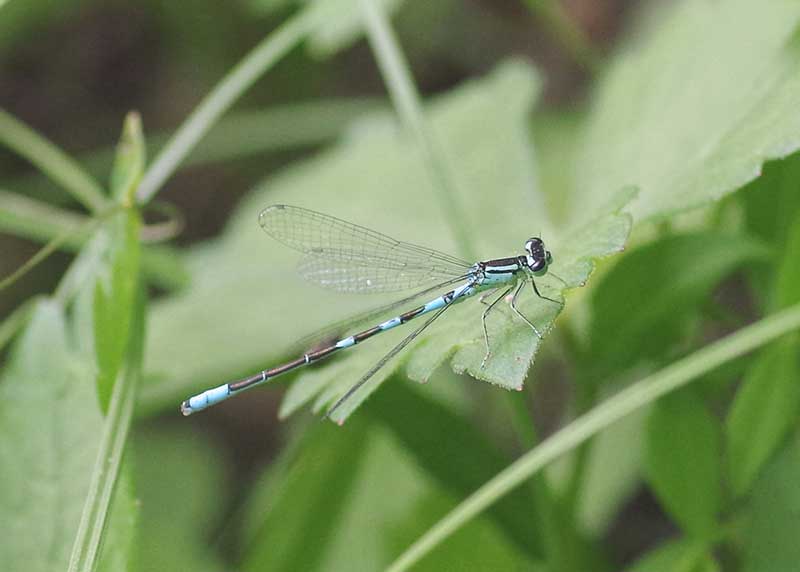 It’s spring, and it’s time to brush up on our bluet damselfly IDs because they’re starting to hit the airways. Most bluets are 1″ to 1.3″ long and, as their name suggests, males are at least partly blue with a blue tip at the rear. Visually, our 20-ish Wisconsin species are split into the black-type bluets (males with abdomens that are mostly black), the blue-type bluets (with abdomens mostly blue), the intermediate bluets (with roughly equal blue and black—sometimes a judgement call), and “other”—the very-colorful Orange, Vesper, and Rainbow Bluets. Identification can be a bear, but the claspers at the tip of the male’s abdomen are diagnostic. Bring your hand lens (or your macro lens). Females are tricky, too, often having several color forms. 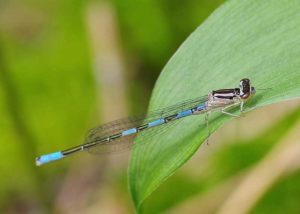 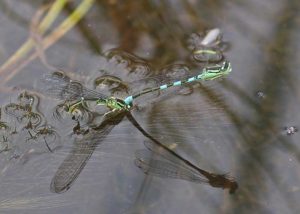 TAIGA (pronounced TY’ gah) BLUETS (Coenagrion resolutum) are a lovely, early, black-type bluet that is common in Wisconsin and very common across Canada. They’re usually the first damselfly the BugLady sees each spring, reminding her that she has spent the winter forgetting anything she ever knew about bluets. It’s our northernmost-flying damselfly, found in the northern half of North America all the way up to the Arctic Ocean. (The resolutum part of its name is said to reflect its fortitude in the face of a cold climate.) It lives near quiet waters like bogs, marshes, ponds, and spruce and tamarack swamps. (The Taiga or Boreal forest biome is a swampy forest made up of conifers that covers a good part of the far (far) north, around the globe.)

Females can be green or brown.

Like a lot of damselflies, Taiga Bluets often lurk in tall vegetation, where they can dodge both predators and the wind. According to Robert Dubois in Damselflies of the North Woods, males emerge in late May, when the water temperature reaches 54 degrees. Females lay eggs in submerged plant stems, in tandem with the male, and she may go completely underwater while ovipositing. 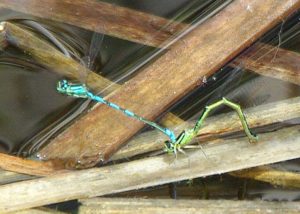 They overwinter as naiads in diapause (dormancy), “embedded in ice for one of the last three instars,” says Dubois. Not only can they survive being frozen, these cold-adapted naiads are so hardy that when researchers gave them warmer water to develop in, their growth lagged. Because of their chilly surroundings, they may take more than one season to mature. The aquatic naiads eat a lot of midge larvae and tiny crustaceans called daphnia.

In keeping with long-standing tradition, starting next week, BOTW will be CLOSED FOR JUNE, while the BugLady hits the trails with her camera. Each week she will send out a tasteful and/or timely item from her “Bugs in the News” file.

Go outside – look for dragonflies!