Called Syrphid Flies because of their family (Syrphidae) and Hover Flies (because they hover) and Flower Flies (because they are found on flowers) (Hey, you don’t always have to be Carl Linnaeus, here), these guys are bee/wasp mimics. Admit it, at first glance, you thought it was a little bee because of its size and shape and because it wears Nature’s warning colors. One easy difference between them is that flies have two wings (order Diptera = two-wings), while wasps and bees (Hymenoptera—membrane-wings) have four. Though they look and act like bees and wasps, they are better at hovering than either. If you look closely at this guy/gal’s wing, you can see the lengthwise “false vein” or fold that is characteristic of hover flies. 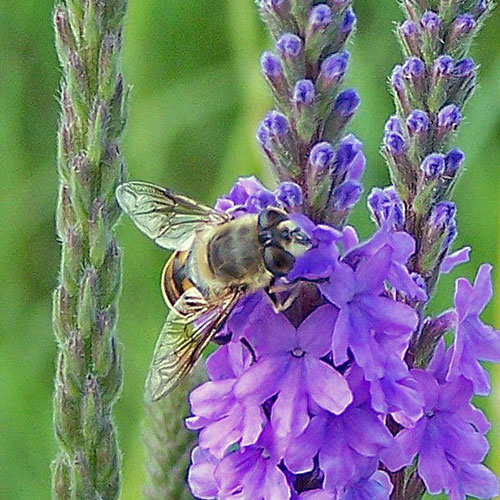 When syrphid flies fly, they give off a slight droning sound; when they perch, they hold their wings out a little from their sides like a V. They are small, measuring 3/8″ to 5/8″ long. Some syrphid flies are nearly bee-sized, but the mosquito-sized duo in below right are at the small end of the range.

Males will hover for long periods in hopes of attracting a female, and the Bug Lady finds it a bit disconcerting to be sitting outside and suddenly realize that the same syrphid fly has been hovering in front of her, staring at her, causing her to wonder exactly what she does look like through compound eyes, anyway? Some males defend territories.

The larva of one species, the Drone Fly, is semi-aquatic and has the awesome name “Rat-tailed Maggot.” Larvae of other species live on land and feed on aphids. Adults feed on the pollen and/or nectar from flowers which they inadvertently pollinate. Some aquatic larvae that live in stagnant water may cause disease in people who drink the water, but the adults are harmless.

When a flower fly puts its teeny tiny maxillary palp on one’s arm, one feels a teeny tiny cold spot (it is clear that the BugLady leads a far more exotic life than anyone previously imagined).