The not-so-camouflaged, brilliant-and-chunky Swamp Milkweed Leaf Beetle (Labidomera clivicollis) is one of the BugLady’s favorite beetles. It belongs in the huge Leaf Beetle family Chrysomelidae (more than 1,700 species north of Mexico), many of whom are named after the plants they specialize on. Familiar family members are the Colorado Potato, the Cucumber, the Asparagus (OK, some of its relatives are up to no good), the Dogbane Leaf, and the Golden Tortoise beetles. Look for the SMLB (a.k.a. the Milkweed Leaf beetle) anywhere east of the Rockies and into southern Canada where milkweed grows, and note that there is variation in shade and markings from one individual to the next. 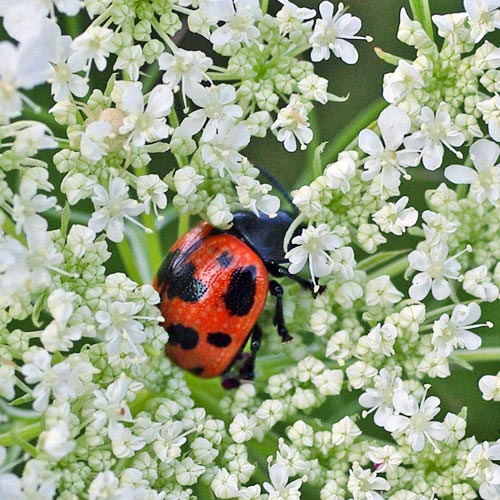 How do they survive the “not-so-camouflaged” part? Aposematism again. As their name implies, SWLBs eat milkweed (they may prefer Swamp milkweed, but they’re found on other milkweeds as well). Multiple eggs are laid under milkweed leaves; multiple larvae (grubs, to beetle fanciers) hatch out (more about that later) and feed together on milkweed leaves for a while before going their separate ways. Adults also feed on milkweed, enjoying both the leaves and the flowers.

And, as seasoned BugFans recall, milkweed is poisonous. Its rubbery sap contains cardiac glycosides that, at the very least, make its imbibers throw up—unless they have, like the other milkweed grazers and a variety of herbivores that successfully feed on toxic plants, developed an adaptation that allows them to deal with the chemicals. They are not harmed by the toxin, but predators that feed on them are (a few tropical birds and rodents are able to eat Monarchs without harm—Mother Nature is always stirring the pot). Animals that can feed on poisonous plants tend to be decorated by aposematic (warning) colors (except for “Rappaccini’s Daughter”). (Look it up). 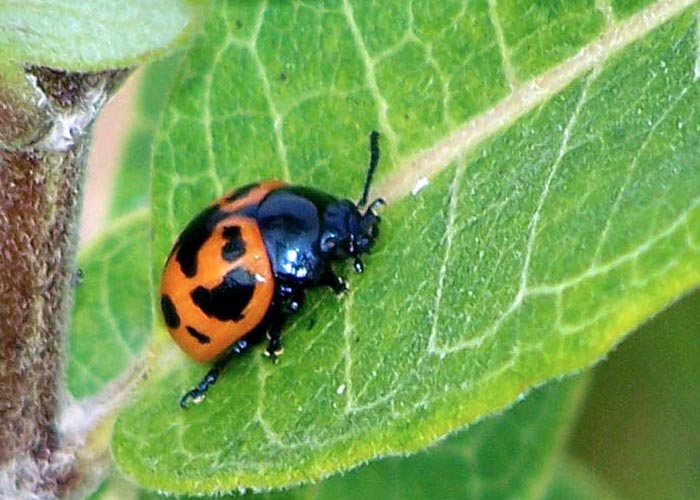 Even though they can consume milkweed sap without harm, SMLBs, like Dogbane Leaf Beetles of previous BOTW fame, have devised a way not to consume quite so much of it. Before noshing on a leaf, the beetles (both adult and larva) sever some of the leaf veins “upstream” of their meal site; this serves to divert some of the latex. When the larvae have satiated themselves, they drop off the milkweed and pupate on the ground (“bailing” is also a common defense strategy used by many beetles). SMLBs overwinter as adults, often nestled deep in the dead basal rosette of a nearby mullein plant. 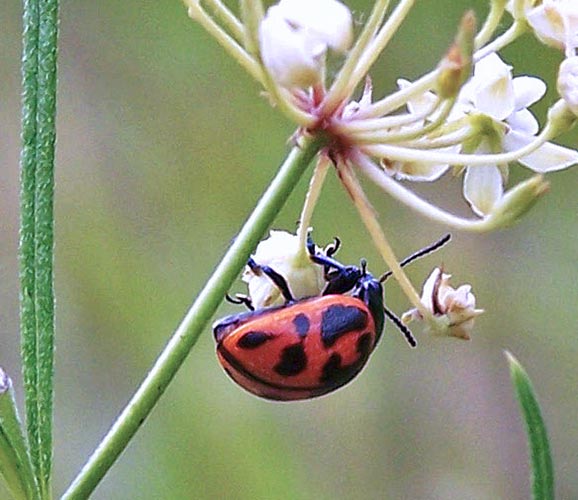 It turns out that the SMLB has caught the attention of scientists who have made a variety of observations/carried out a number of studies. What have they discovered about this flashy creature?

Despite their noxiousness, SMLB larvae are picked off of milkweed leaves by damsel bugs, stink bugs, and hover fly larvae (not, apparently, impressed by orange and black). One researcher suggested that SMLBs picked Swamp Milkweed because it often grows surrounded by water, which discourages predators from the ground—a beetle with a moat. 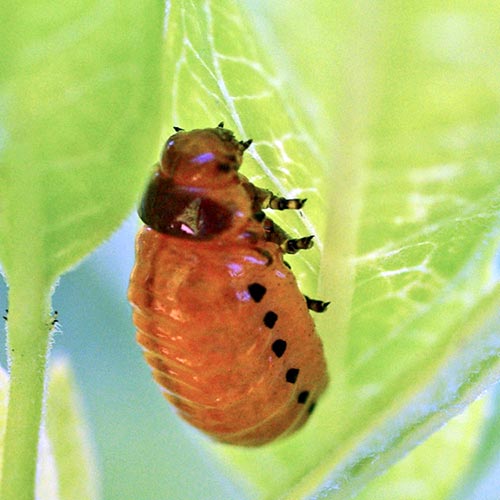 Both larval and adult female SMLBs dabble in egg cannibalism (males abstain). SMLBs move around the milkweed patch, leaving egg clutches as they go, and guarding none of them (other species in the genus do guard). Happily, Ms. SMLB tends to eat eggs not her own (Pre-emptive egg guarding? Picking off the competition?), but her earlier offspring may feast on Mom’s later broods (siblicide). Interestingly, about 15% of SMLB eggs are infertile, and these are commonly cannibalized (trophic egg-laying), which suggests that Mom puts out these infertile eggs to protect the fertile ones (but the BugLady’s not sure you can call it cannibalism if no one was home in the first place). The more eggs and larvae around, the more egg cannibalism occurs.

Ms. SMLB mates promiscuously and for long durations. The earlier a male emerges and the more mobile he is, the better mating success he enjoys. The male who stays with her longest has the best chance of having his sperm outnumber/overwhelm the opposition’s from another mating. Male SMLBs may produce more than 250,000 sperm; about 30,000 may be transferred during a 24 hour mating, and “mating associations” may last up to five days. In long associations, only 10% of takeover attempts by other males are successful.

SMLBs entertain a subelytral mite (a mite that hangs out under the hard wing covers or elytra) and (the BugLady is treading very carefully here) the mite arrives as a kind of invertebrate STD. The mites are transmitted when the beetles copulate. Unlike some other parasites that may influence a host’s behavior, SMLBs seem unaffected by their mite load as long as the beetles are adequately nourished. Except that a male with a hefty mite load is more likely to try to interrupt a mating pair. As the researcher concluded—“parasitized beetles compensate for loss of fitness by increasing reproductive effort.” Which is good news for the mites.

P.S. BugFan Mike, who knows whereof he speaks, sent the following comments about last week’s Daddy Longlegs revision: The lip-locked DLLs are probably mating. Male DLLs, unlike spiders, have a penis, and they mate face-to-face. The voyeuristic DLLs may have been attracted by courtship pheromones. Wisconsin has about a dozen species of Harvestmen. BugFan Mike ID’d a number of the DLLs pictured in the episode; the DLL reclining with its belly on the leaf is an alien DLL Phalangium opilio, described by Linnaeus himself, in 1758. Students of DLLs prefer the term Opilionologists. Other Arachnologists tend to look down on Opilionologists.