The porch-light Pearly-eye is not the first one that the BugLady has seen after dark—she has photographed them on oranges (put out for the birds) after sunset and at 1 AM under her yard light.

On the topic of nocturnal butterflies, the internet is, understandably, largely mute (of course, the BugLady is keyword-challenged) (and there is a film by that name). In Mariposa Road, Robert Michael Pyle says that the Northern Pearly-eye “might be the closest thing to a nocturnal butterfly in the United States,” and there was a tantalizing paper called “Nocturnal Butterflies of Panama” by Annette Aiello, who reminds us that day-flying Lepidopterans are a very small minority indeed (butterflies make up fewer than 10% of species of Lepidoptera). She goes on to say that our knowledge of butterflies is expanding, and that a family of Lepidopterans in Panama that was once thought to be moths in the inch-worm family (Geometridae) turned out to be nocturnal butterflies!

A search for “crepuscular butterflies” (dawn and dusk) proved only minimally more successful. Most trails lead to the Pearly-eye’s family (family Nymphalidae, the brush-footed butterflies) and to its subfamily Satyrinae, and then to members of its genus (which is either Lethe or Enodia, depending on whose book you read).

Northern Pearly-eyes are generally described as shade loving butterflies of forest glades and edges, not found on flowers in sunny meadows. Weber, in Butterflies of the North Woods, says that they “may be active early a.m. or late p.m. when they court,” and several sources said that they may come to light at night. Quod erat demonstrandum.

Day-flying butterflies face a variety of predators, but being afoot at night isn’t much safer; many bats would consider a Pearly-eye a tasty morsel. Like some families of moths, butterflies in the subfamily Satyrinae have hearing organs—swollen, fluid-filled, enervated veins on the underside of their forewings. The Pearly-eye folds its wings at rest, which exposes the “ears,” located at the base of its wings (in fact, the BugLady has never seen a Pearly-eye with its wings spread and would probably not recognize it if she did). Day-flying butterflies may be able to detect the sound of a bird’s wings, and Pearly-eyes may be able to hear the clicking of bat echolocation.

Find a brief biography of Northern Pearly-eyes in the Bug of the Week archive. 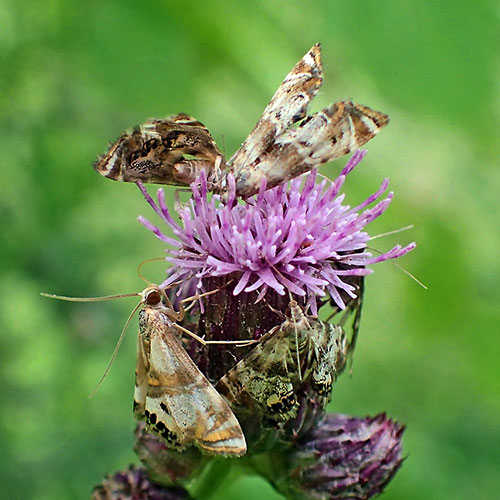 .
Field note #2 – When the BugLady was out on the prairie after a rain last week, she found a bunch of Blue Mud Daubers visiting the water reservoirs of cup plants (more about that in a future BOTW). To find out why, see BOTW’s Black and Yellow Mud Dauber (Family Specidae). 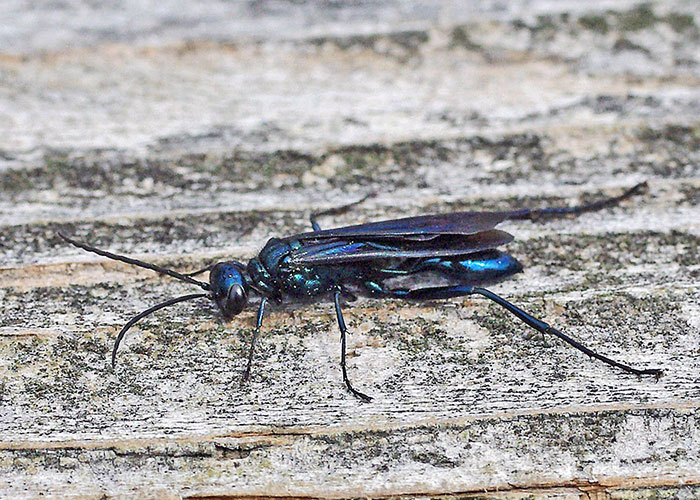