The BugLady is spending as much time as she can in the field (and the rest of it editing pictures) because, you know, the Summer Solstice has passed, and a little wave of warblers moved through her yard the other day, and winter is coming. Many of these beauties have already starred in their own BOTW. In a nutshell – there’s a whole lot of romance in the air. 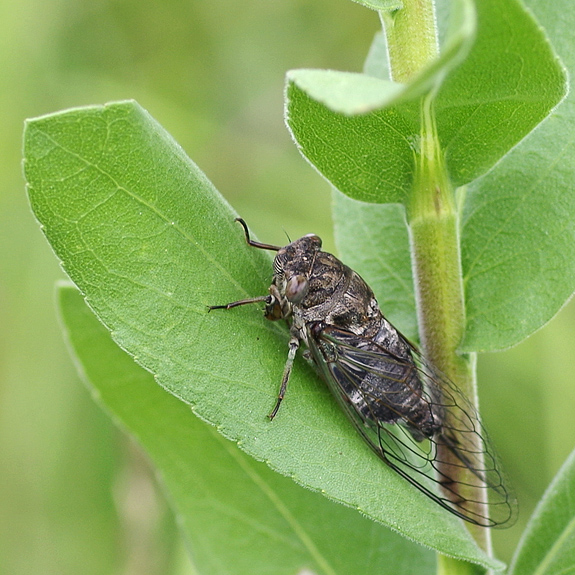 CICADAS are calling https://uwm.edu/field-station/dogday-cicada-family-cicadidae/. Historically, we’ve had lots of Dog-day cicadas in Southeastern Wisconsin (and very few of the famous Periodical cicadas), but there are other voices, too. Along the Mississippi, some species sing well into the night. The BugLady Googled “Cicadas Wisconsin” and found this nifty site: http://www.cicadamania.com/genera/usa.php?category=A&qs=WI 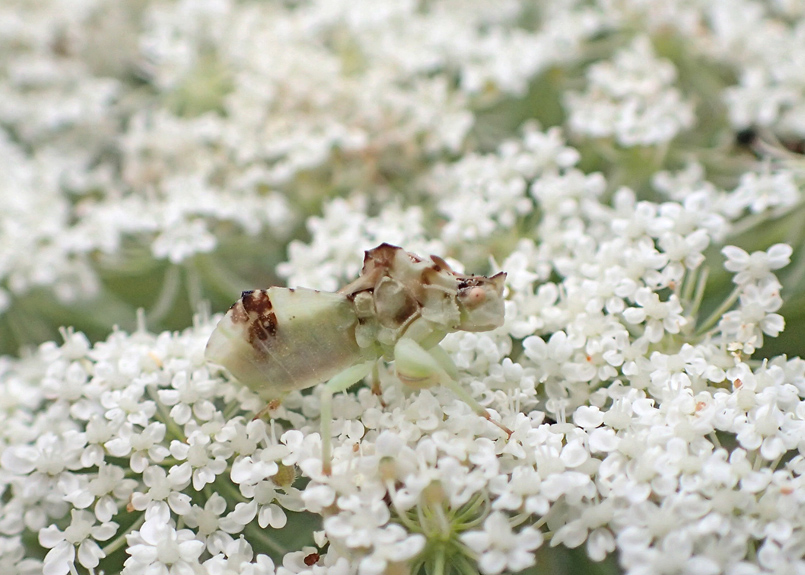 JAGGED AMBUSH BUGS (a common name shared by about 20 species in the genus Phymata) are pretty high on the BugLady’s list of favorites. They are fierce predators with a lot of attitude wrapped up in that little body. When the BugLady sees an inert (and sometimes sizeable) insect dangling from a plant, the predator at the other end is inevitably a crab spider or an ambush bug. 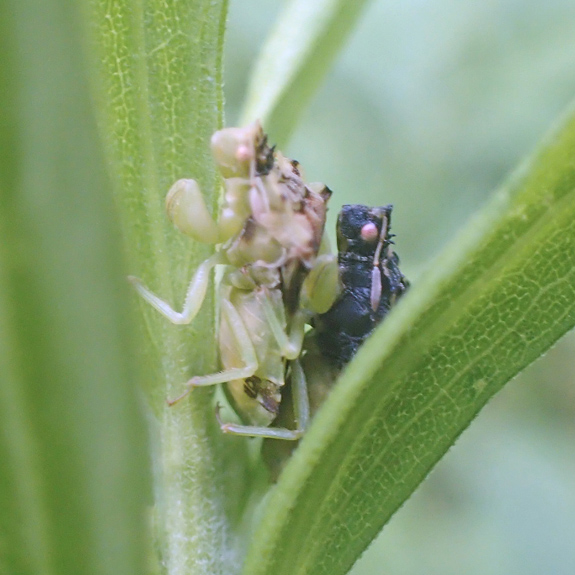 When the BugLady is editing ambush bug pictures, she often discovers a well-camouflaged second ambush bug, or even a ménage a trois in a flower. Bugguide.net tells us that “Coupling may involve several males riding around on a single female. Sometimes it allows them to take down larger prey, although coupling individuals have been found each with their own prey as well.” 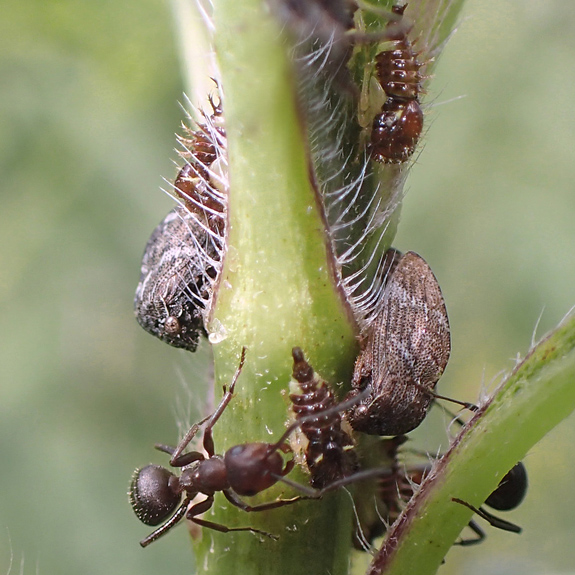 ANTS CARING FOR TREEHOPPERS – Some species of ants (and wasps and bees and other insects) supplement their diet with honeydew, a sugary liquid that comes out of one end of an aphid or treehopper when it takes in plant sap (which comes out under pressure) through the other end. Ants “farm” the honeydew producers, protecting them from predators, and in return they are allowed to “milk” their “livestock.” Win-win. Animals (and plants) that have symbiotic relationships with ants are called myrmecophiles. 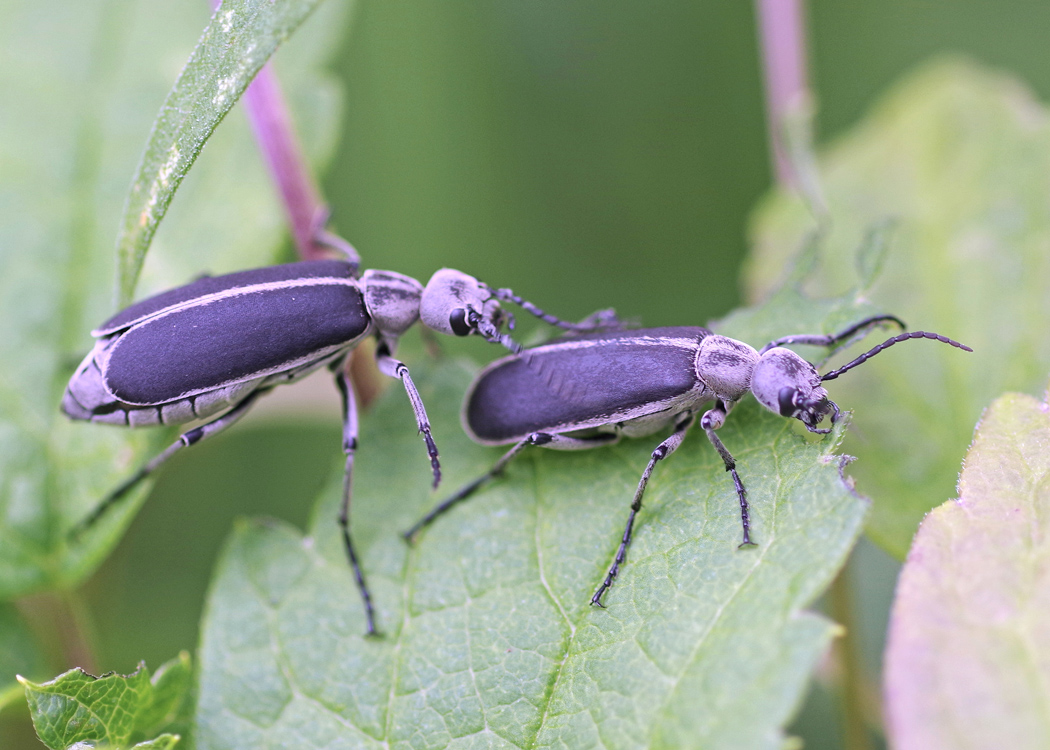 It’s BLISTER BEETLE season. Black blister beetles (Epicauta pennsylvanica) conspicuously prowl the goldenrods in August. These elegant gray and black beetles are members of the Epicauta cinerea group, which includes six, very similar species north of the Rio Grande that can be gray and black, or all gray, or all black. The BugLady suspects that these are Clematis blister beetles (Epicauta cinerea), because they were crawling around on Virgin’s Bower vines. The first stage/instar larva of many blister beetle species is a “larva on steroids” called a triungulin – a very mobile critter that actively searches for its food. When it locates prey, it settles down as a normal, sedentary grub. Members of this genus eat the eggs of many grasshopper species. Look, but don’t touch: https://uwm.edu/field-station/blister-beetle/.

Some blister beetles have an elaborate courtship – as the BugLady watched this pair, the male advanced from the rear, rocking back and forth, twirling his antennae and maxillary palps (paired appendages below the mandibles, used for sensory and feeding purposes). 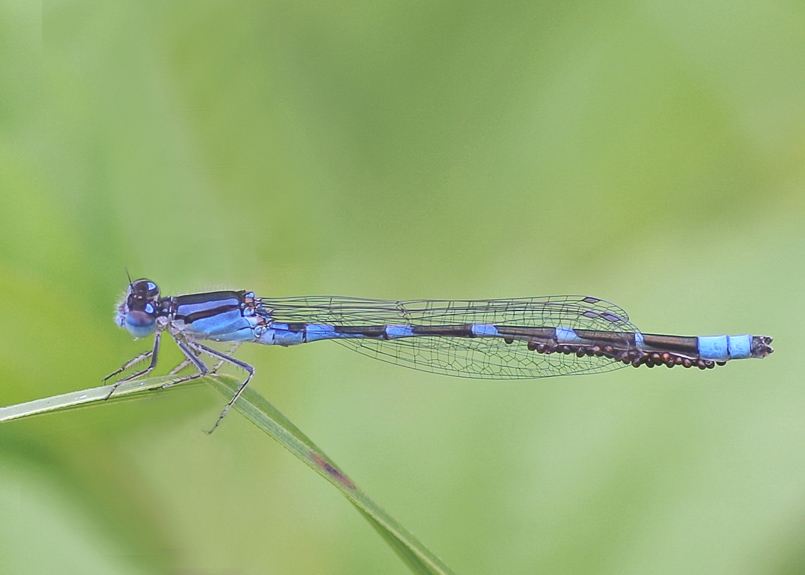 This TULE BLUET is carrying quite a load of water mite nymphs on its abdomen. Like their tick relatives, the mites feed from the outside of the dragonfly. They climb on board an almost-mature dragonfly or damselfly naiad while it is still under water, but they don’t feed. When the adult pulls out of its old exoskeleton, they attach themselves anew while it is resting and its new exoskeleton is still soft. A big mite load can sap the insect’s energy, shorten its life, and, depending on where they’re attached, even interfere with reproduction. For a good article about mites, see: http://nwdragonflier.blogspot.com/2012/01/mite-y-dragons-odonata-and-water-mites.html 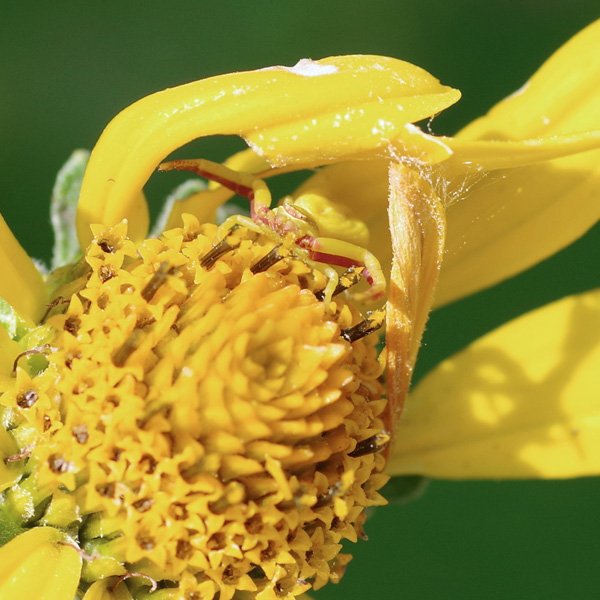 They don’t spin “trap webs” like the orb weavers, but they’re not above creating a little shelter, and this one webbed some ray flowers together for a bit of extra camouflage. Pollinators beware! 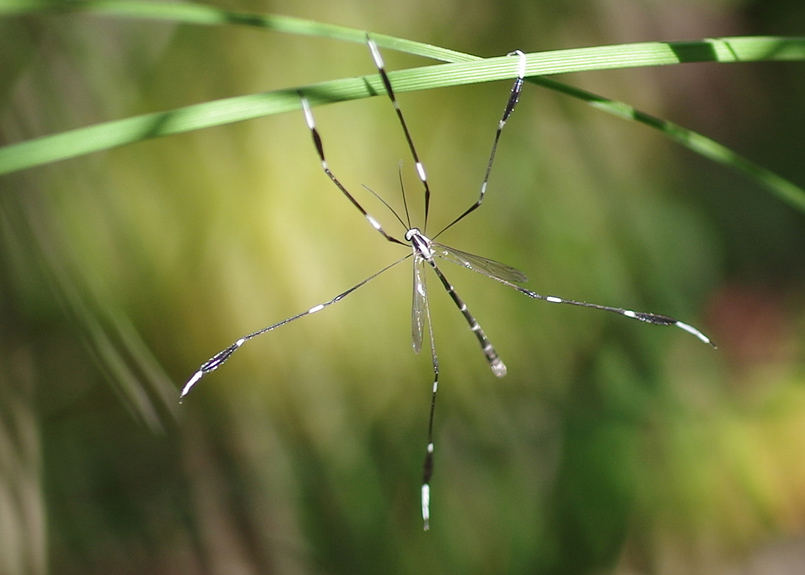 PHANTOM CRANE FLIES are about as magical as it gets. They are a subtle movement flickering at the corner of your eye on the dappled edges of wetlands – like those stars at night that you can only see by looking slightly to the side. Slim, leggy flies, they fly/drift through vegetation, aided by ridges on their tibiae that catch the breeze like tiny sails https://uwm.edu/field-station/phantom-crane-fly/.

It’s hard to connect this LACEWING LARVA with the delicate, golden-eyed adult Green lacewing. The BugLady started to write a brief bio about lacewings, and then she found this great video: https://www.youtube.com/watch?NR=1&v=fbRK6E5crbg&feature=endscreen. Lacewing larvae like to drop out of trees onto the BugLady and bite her. Wikipedia tells us that “the larvae may also occasionally bite humans, possibly out of either aggression or hunger.” Definitely aggression. 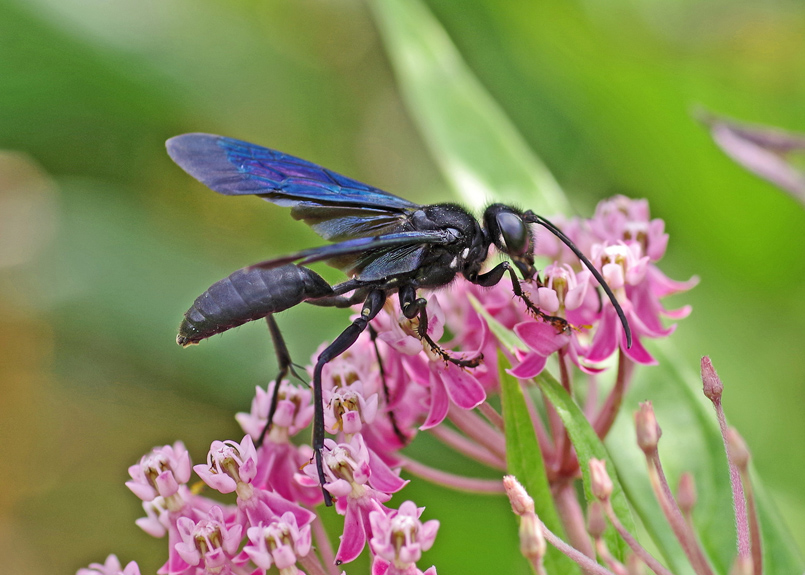 GREAT BLACK WASPS are impressive wasps that dominate the flower tops in the second half of summer (there are a few species of blue-black mud wasps that look similar but are smaller). If you look closely at her legs, you can see golden fringes near her feet. Those are milkweed pollinia, sticky, saddlebag-shaped structures that are found within the flowers. The BugLady sometimes finds lesser Hymenopterans, like honeybees, suspended from flowers when one foot gets stuck to a pollinium (she takes a grass stem and detaches them) https://uwm.edu/field-station/great-black-wasp/.

WHITE-LINED SPHINX MOTHS have big population booms periodically – the last one was in 2013, and they were everywhere. The BugLady was watching some hummingbirds squabbling over a patch of Bouncing Bet late one afternoon and she realized that one was smaller than the rest https://uwm.edu/field-station/white-lined-sphinx-moth/. Yeah – a little out-of-focus – working on it. Be on the lookout. 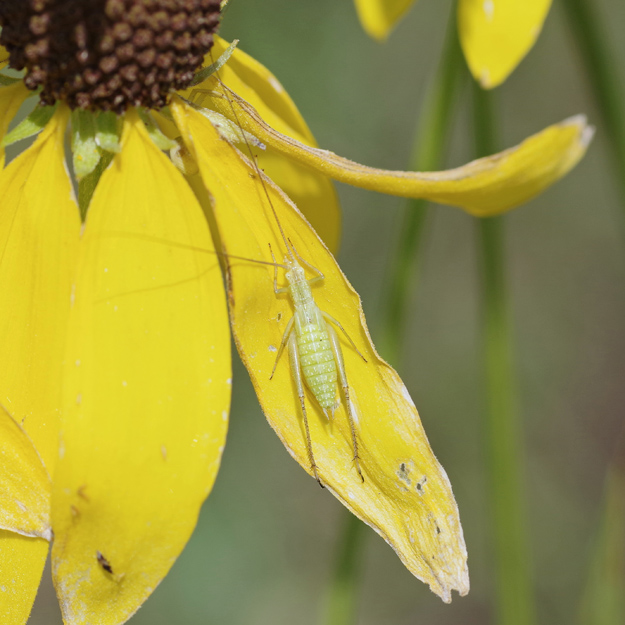 TREE CRICKETS are starting to sing https://uwm.edu/field-station/tree-crickets/, though this one is a bit too young to join the chorus. Hear the full line-up at http://entomology.ifas.ufl.edu/walker/buzz/cricklist.htm. 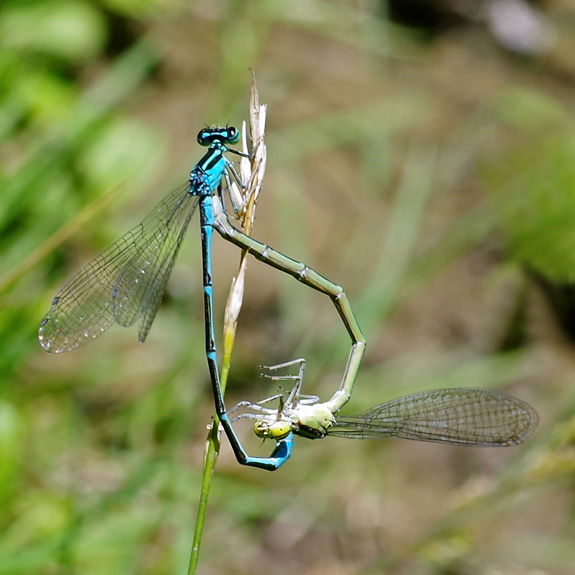 Like other Odonates (damselflies and dragonflies) the male STREAM BLUET initiates this dance by transferring sperm from the tip of his abdomen to a receptacle neat its base. When he grasps a female in back of her head (not a totally benign process – the BugLady has pictures of Spreadwing damselflies with bits of tissue stuck to their claspers/cerci), the female reaches forward and retrieves it, forming a “mating wheel.” Later, he will guard her as she oviposits, to keep her from being stolen by a rival male. 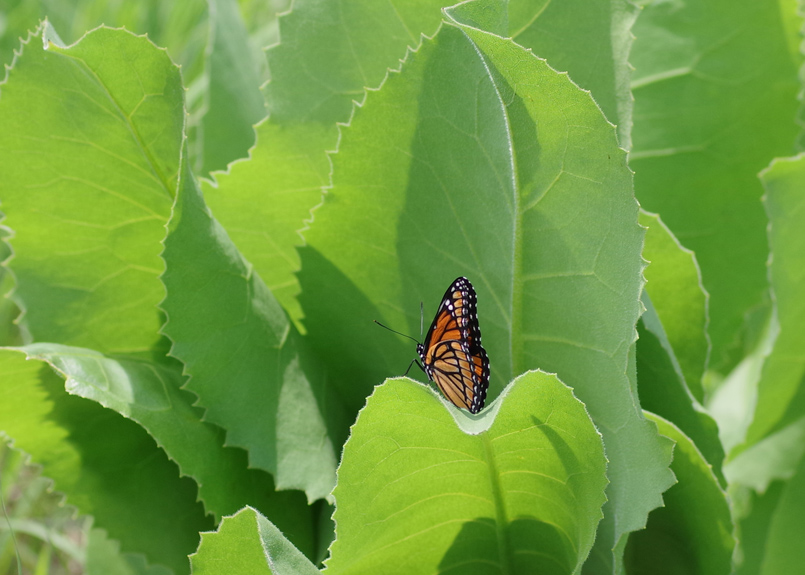 And finally, what is summer all about, if not Technicolor, as illustrated by this VICEROY BUTTERFLY sitting on a prairie dock leaf?

GO outside – look at bugs (while ye may)!