(This episode may look familiar to you if you read the newsletter of the Western Great Lakes Bird and Bat Observatory, where it appeared earlier in fall. Forest Beach Migratory Preserve is a property of the Ozaukee Washington Land Trust. If you don’t support these two fine organizations, please consider it).

It should come as no surprise to seasoned BugFans to hear that the BugLady and her camera spend a fair amount of time in the warmer months cruising for dragonflies and damselflies.

One of her haunts is Forest Beach Migratory Preserve, a reclaimed golf course in Ozaukee County that was created to be a resting and refueling place for migrating birds and a productive habitat for breeding species. It turns out that what’s good for the birds is good for Odonates, too. Scroll down to “Rare Dragonfly at FBMP”. A number of rare dragonflies and damselflies have found their way to Forest Beach, so it’s on the radar of dragonfly enthusiasts; with more eyes on the place, it’s only a matter of time before new species are discovered (that’s called the Patagonia Picnic Table Effect) (Google it). Eight of the forty-two (so far) species on the property list are considered rare visitors to Wisconsin. 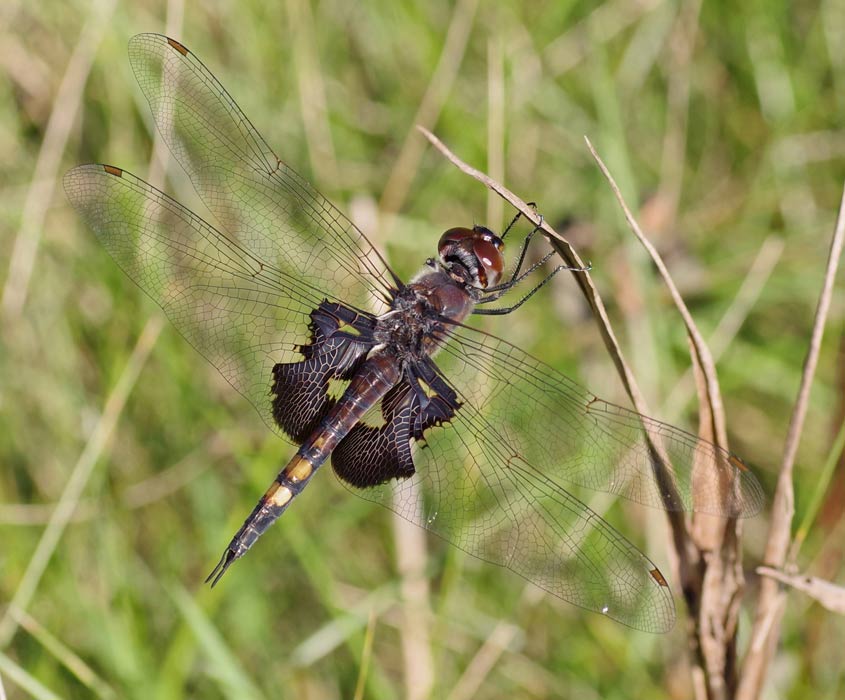 Fall is an exciting time to be at Forest Beach, because the big guys – the darners and saddlebags – rule. On September 11, 2018 the BugLady photographed (and initially misidentified – thanks BugFan Freda) a fourth saddlebags at the Preserve, a Striped Saddlebags (Tramea calverti). Two weeks later she found another one, a different individual!

Striped Saddlebags, named for the conspicuous markings on the thorax, are in the “narrowsaddle” group because the smooth-edged “saddles” don’t extend very far into their wings. They’re a tropical species that are “vagrants” or “accidentals” here – not regular migrants (only about 15 species of dragonflies are migratory), but unpredictable wanderers. As a result, they’re a “Most Wanted” species among dragonfly-watchers in Wisconsin and elsewhere. There are small, resident populations in far South Florida and along the US-Mexico border, but they’re more at home through Central and South America, the Galapagos, and the Bahamas. Striped Saddlebags wander farther north than other narrowsaddle saddlebags do. 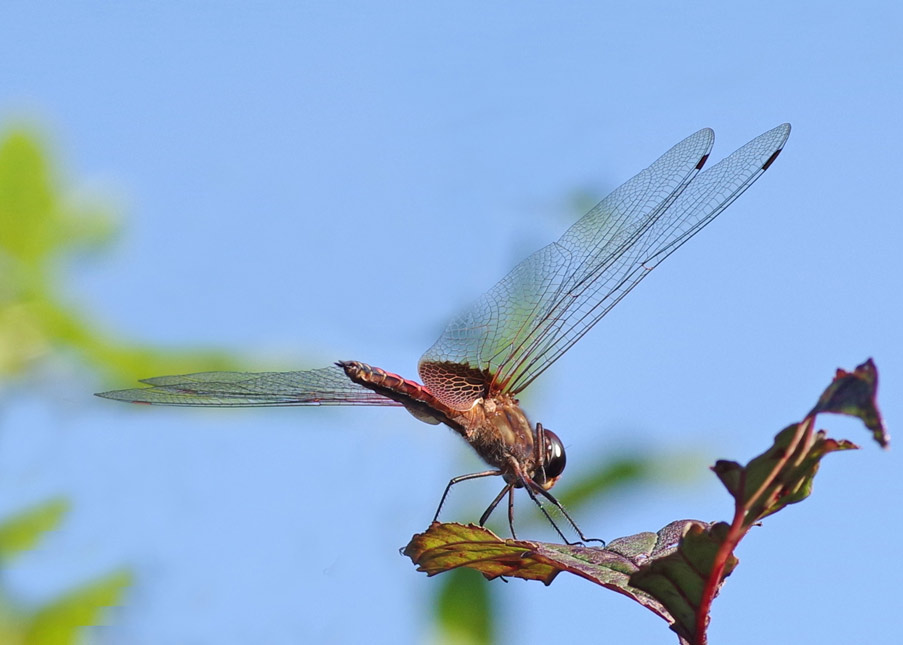 See a really nice set of pictures at http://azdragonfly.org/species/striped-saddlebags.

As vagrants, Striped Saddlebags have some big flight years and other years when they mostly stay home, but when they do travel, it’s not uncommon for them to travel in small groups. A huge flight occurred in 2010, when Striped Saddlebags appeared in Michigan, Minnesota, Ontario, and New Jersey – an article on the Cape May (NJ) Observatory’s “View from the Cape” BlogSpot described the area as “Swimming in Striped Saddlebags” (and clearly, there was some hanky-panky going on). There were widespread sightings again in 2012.

The Wisconsin Odonata Survey website lists a total of 19 Striped Saddlebags sightings since their first records in 2012, when it was seen in five counties. Of the 19 sightings, 14 are from four southwestern counties along the Mississippi. Along with the individuals seen at Forest Beach in 2018, Striped Saddlebags were recorded Kenosha County in early September and in La Crosse County in late September.

The life cycle of a Striped Saddlebags mirrors that of other saddlebags. Males and females fly in tandem over suitable wetlands (shallow, open, fishless ponds with lots of floating vegetation); he releases her to drop down to the surface to deposit a few eggs, but afterward she returns to him and he re-fastens his claspers on the back of her head as they look for another spot. This prevents her from being pirated by another male. 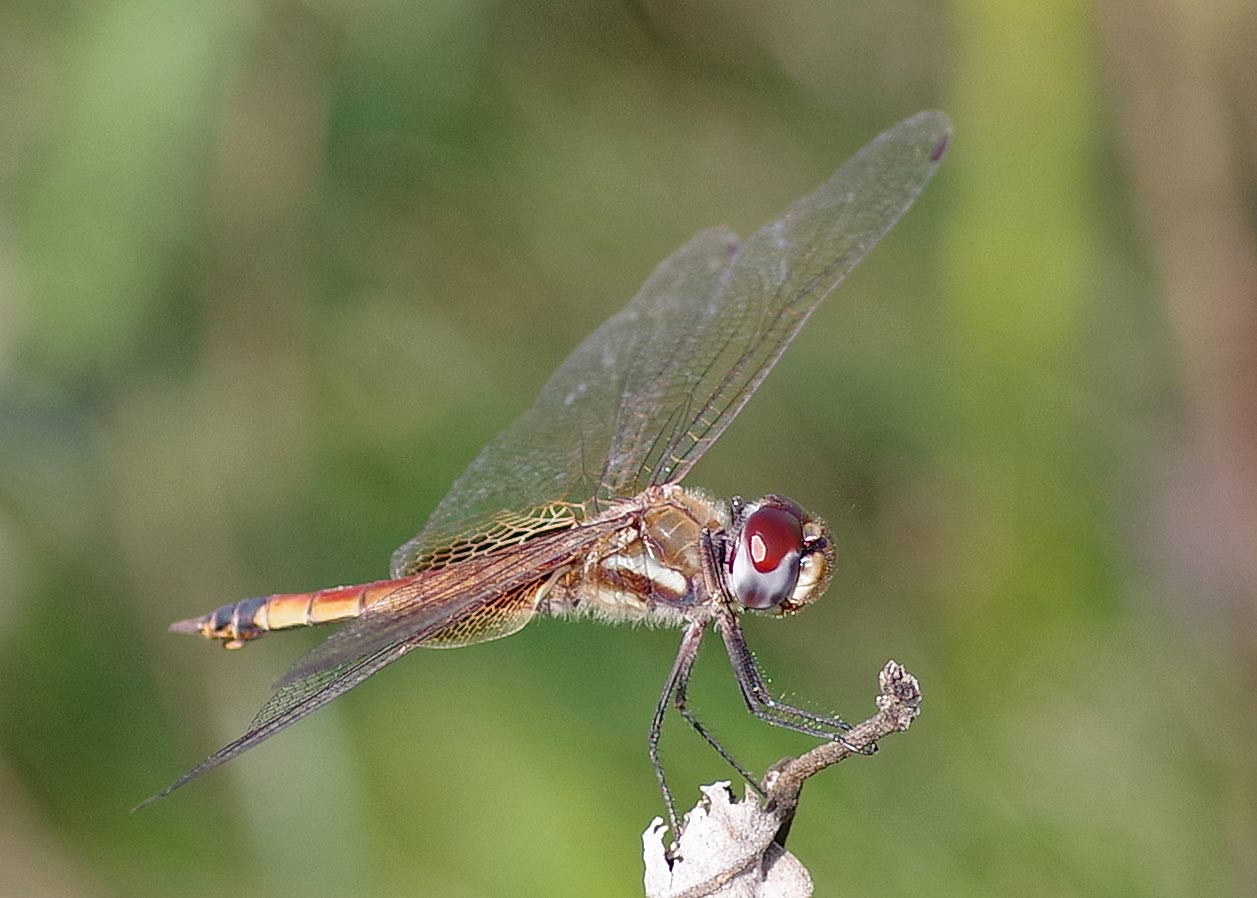 The young dragonflies (naiads) live under water, feeding on any aquatic invertebrates that they can tackle. Mature naiads crawl out of the water, often under cover of darkness in order to avoid predators, rest, and then split the back of their exoskeleton and pull their body out. When their wings are fully extended and hardened, they are ready for flight.

Both male and female Striped Saddlebags were present at Forest Beach in the fall of 2018. Are there naiads waiting for the water to warm in 2019, or would these tropical dragonflies be too cold-sensitive to survive under the ice? Stay tuned.

Meantime, if you see a saddlebags with red saddles, look twice.