As long-time BugFans know, the BugLady has found a number of BOTW stars in her home (or they’ve found her, when they paraded up to her brazenly, looking for an audition). The episodes about sowbugs, dermestid/larder beetles, scorpion flies, dance flies, Asian lady beetles, long-bodied cellar spiders (which co-starred with daddy long-legs), fleas, ticks, meal moths, pseudoscorpions, false bombardier beetles, leaf-footed bugs, camel crickets, fruit flies, and silverfish all started indoors, and the box elder bug episode might as well have (we’re never really alone, at least in this house). And that list doesn’t include the beautiful adolescent milk snake that appeared on the BugLady’s computer desk as she was working one spring day.

Today’s star, the Strawberry Root Weevil (Otiorhynchus ovatus) (probably) was first spotted walking across the dictionary, so some etymology will be appropriate, too (O vatus means egg-shaped). 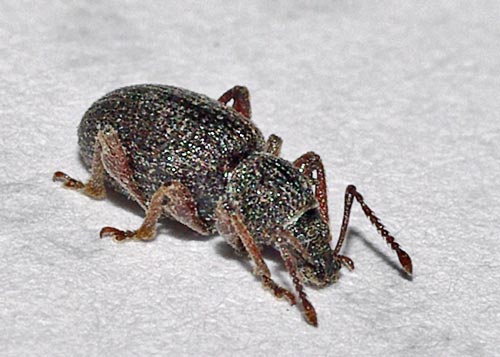 If this weevil isn’t an SRW, the BugLady’s next guess would be the Cribrate Weevil (O. cribricollis), but her weevil seems to have the SRW’s grooved thorax as opposed to O. cribricollis pitted thorax (TMI). Cribrate comes from the Latin cribrum (sieve); its definition, pierced with small holes, alludes to the many “pits” in the beetle’s thorax and elytra. Cribrate Weevils originated in the Mediterranean and found their way to Australia by 1890 (where they’re considered a big pest in apple orchards); to California by 1928 (they bother orchards and vineyards there); and to Hawaii by the late 1950’s. They are sometimes called the Olive weevil.

Weevils (family Curculionidae) make up the largest family in the beetle order Coleoptera. Strawberry Root Weevils belong to a subfamily called the Broad-nosed Weevils. Weevils are often described as pear-shaped or light bulb-shaped (incandescent light bulbs, that is), with noticeable snouts and with antennae situated partway down the snout like a pair of granny glasses.

In researching the SRW, the BugLady kept coming across the word “adventive.” Adventive (from adventus, Latin for arrival) means “they arrived” and generally refers to an organism that is not native but is locally or “temporarily” naturalized, (a distinction that the BugLady sees as academic). Some dictionaries use the word as a general synonym for non-native or alien. There are 160 species in the genus Otiorhynchus worldwide, and they do get around. In fact, all 14 species of Otiorhynchus weevils in the U.S. are alien. Rhnychosmeans snout or beak, and otiose means futile or functionless, and the BugLady is going to have to chew on that one for a while. 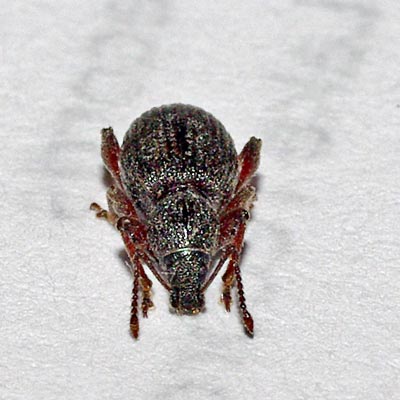 Like most of their Otiorhynchus brethren, SRWs love to overwinter in houses (sometimes in large numbers), where they are harmless (they are the most common indoor-weevil in Minnesota). They are herbivores as both larvae and adults, with the larvae feeding mainly on roots in the soil and the adults feeding on foliage or bark, chewing wedges or semi-circles out of leaf edges. Adult feeding is nocturnal and generally isn’t considered harmful, but the larval gnawing is, causing stunted plants, wilted leaves, poor yields and shortened longevity. They’ll eat strawberry, raspberry, peppermint, and grape, and they are listed as damaging ornamental conifer seedlings in nurseries in the Pacific Northwest. The BugLady wonders if they are also a problem for conifer seedlings in the wild, or whether the artificial concentrations of nursery plants invite artificial concentrations of root weevil grubs (they’ve been tallied at 3000 per square meter). The majority of their damage is done in spring.

In the “Ain’t Research Grand” category, “entomopathogenic nematodes” can be used as a biological control for root weevils. “Entomopathogenic nematodes”—don’t panic, just “unpack” the word—entomo = insect; pathogenic = bad for you; nematodes = nematodes (roundworms in the phylum Nematoda, whose ranks include a gazillion soil organisms plus round, hook and whip worms, well known to dog and cat owners). You need 7.5×10-to-the-9th power parasitic nematodes per hectare for good control. The overall nematode density is suspected to be about 1,000,000 per square meter and there are 10,000 square meters in a hectare (which is a shade less than 2.5 acres), so it adds up (as the Congressman once said, “A billion dollars here, a billion there, and pretty soon we’re talking about real money”). But we digress.

SRWs overwinter as adults, as pupae, or as mature larvae, emerging in spring from the leaf litter—or the house—to eat some more. Adults lay 150 to 200 eggs on/in the soil throughout the summer. Weevils that overwinter as adults get the jump on egg-laying in May, and larvae that must pupate first lay eggs a little later. According to a scholarly paper in The Canadian Entomologist, less than 1% of SRWs successfully overwinter and only about half of the females can lay eggs. 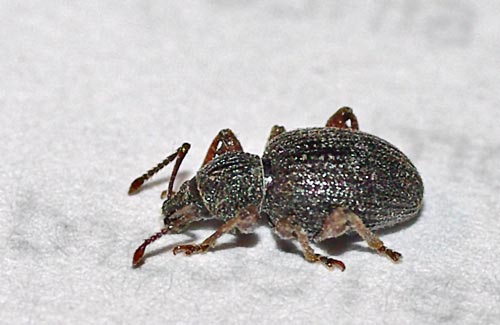