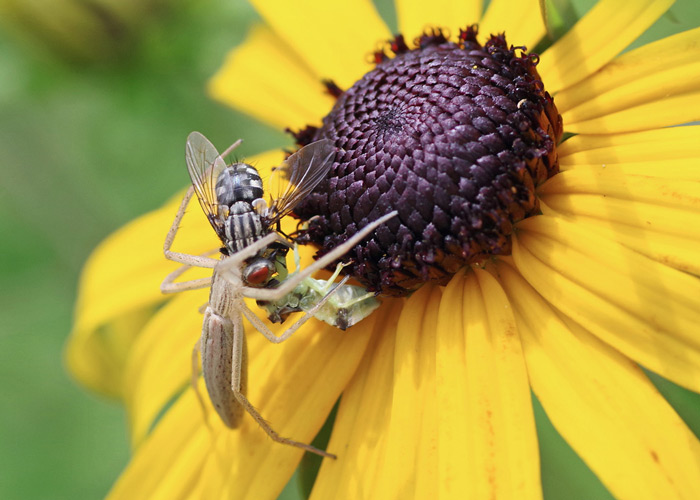 The poet Muriel Rukeyser once wrote, “The universe is made of stories, not of atoms.” The BugLady sees lots of tableaux unfolding as she ambles across the landscape (most have to do with food or sex). Because she was taught, at an impressionable age, by a professor who said “Don’t just tell them what it is, tell them ‘what about it,’” she tries to read the stories and understand the “what-about-its”.

The SPIDER and the FLY – and the AMBUSH BUG

Heterospecific (belonging to different species) predators mostly don’t share, and both the spider and the ambush bug would consider this fly to be a toothsome morsel. The BugLady figures that the ambush bug caught it, and the slender crab spider (Tibellus sp) saw the struggle and popped over to investigate, but not to appropriate it. 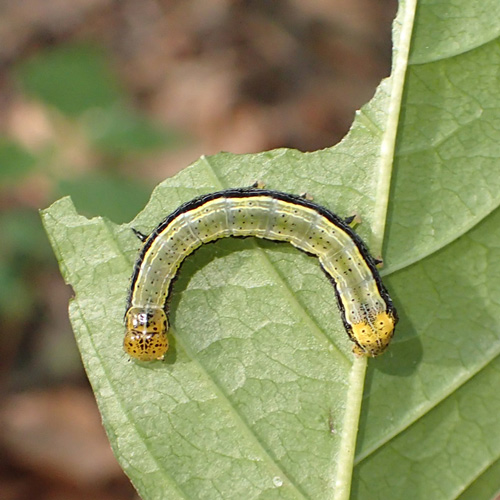 Glossy buckthorn is a Eurasian shrub that was brought over in the late 1800’s to be a lawn/hedge shrub, but because it is a “bird poop seed,” it didn’t stay domesticated. It is a huge problem in wetlands (well, actually, it likes wet, dry, sunny and shady soils) and like other invasive plants, it left its natural grazers behind in the Old Country. The BugLady found this sawfly larva eating buckthorn leaves (she had previously photographed a lightning beetle apparently feeding on nectar or pollen from a buckthorn flower), thus demonstrating the Reinartz Law of Biomass Availability, aka “If you grow it, they will come.” More scientifically put, glossy buckthorn (and other invasive plants) represent a huge biomass of potential food, and eventually herbivores will figure out that they’re edible. Sooner, we hope, rather than later. 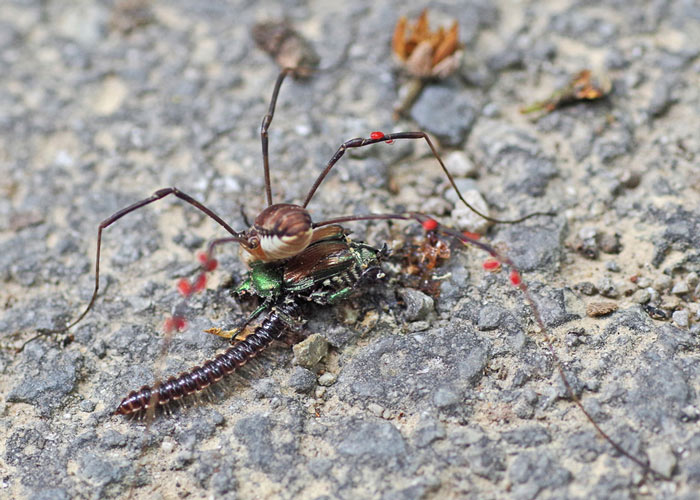 Why did the Japanese beetle cross the road? The story that the BugLady reads here was initiated by the picture’s shiny green centerpiece, a Japanese beetle that did not survive the crossing. It proved attractive in death to two opportunistic scavengers, a millipede and a daddy long-legs (that better keep their wits about them or they might not get across, either). The daddy long-legs’ legs are decorated by nymphs of red mites, which go through a tick-like, parasitic phase before they grow up to eat insect eggs and very small invertebrates. 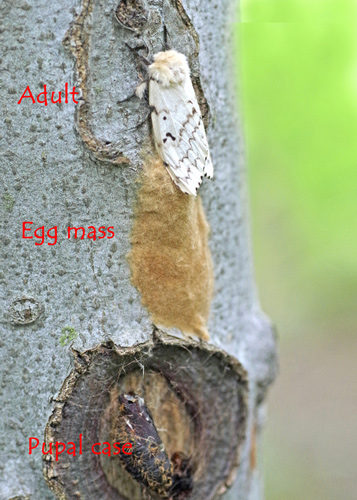 This picture shows three out of four life stages occurring within inches of each other. Gypsy moth larvae get around pretty well – newly-hatched caterpillars use silk to balloon to new locations, and if they and their confreres defoliate the tree they land on, they’ll take off on foot to find another! Adult females are a different story. They emerge from their pupal case flightless, use pheromones to lure flying males to their tree trunk perch, and then create an egg case on the same spot. Not surprisingly, the BugLady is not a rabid advocate of gypsy-moth-control. 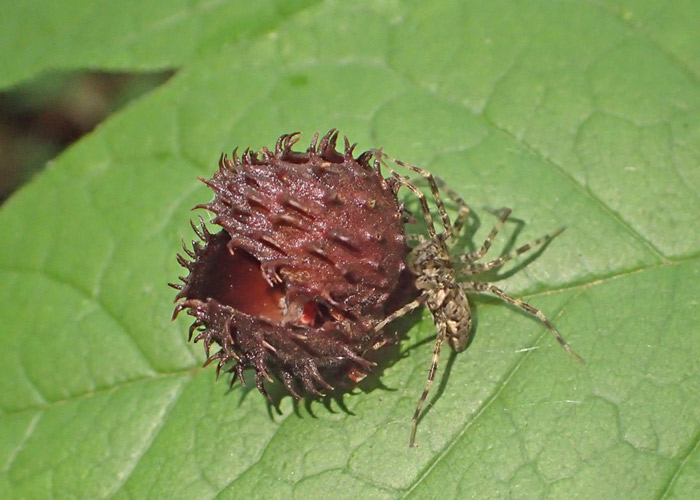 The BugLady photographed this female Philodromid (running crab) spider over a period of four days, guarding the eggs that she had placed inside an empty beech nut (did that nut shell land randomly on the leaf and stay there, or could a spider haul it up to the leaf’s surface?). Egg guarding is common among philodromids, and she hung tough, day after day, as the BugLady and her one-eyed camera loomed above her (the BugLady appreciates cooperative subjects, and she thanks them, but she worries about their survival instincts). On the fifth day, the spider was gone, and the ending of this story is a mystery. 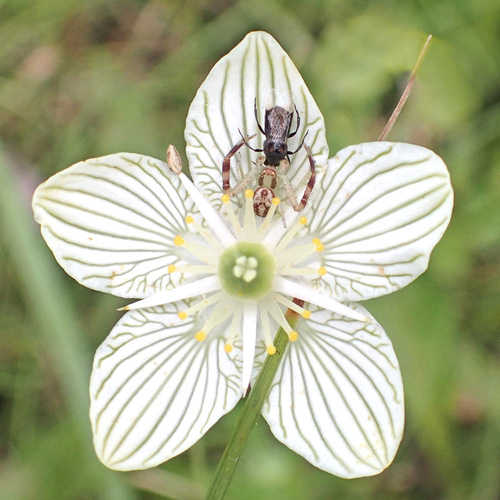 What’s a collection of pictures without a crab spider, in this case a lovely northern crab spider (Mecaphesa asperata), sitting on a Grass of Parnassus flower, preying on a Ripiphorus beetle (and illustrating, once again, that when it comes to camouflage, crab spiders got it right)? Ripiphorus/ Rhipiphorus beetles (the genus seems to be spelled both ways) are fly mimics, but the BugLady still doesn’t see the advantage of looking like a fly when you could look like a beetle. See this previous BOTW for the scoop on Ripiphorus. 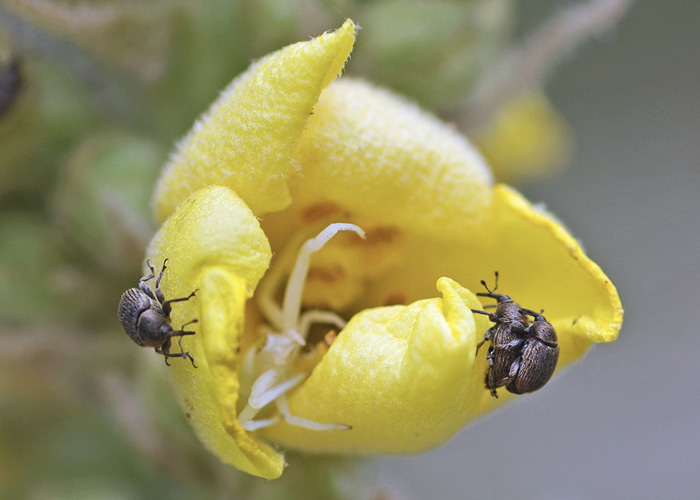 Mullein was deliberately introduced to North America in the 1600’s because the newly-arrived settlers loved it and had many uses for it back home (six species in this collection, including, of course, the European Americans themselves, are “non-native”). Mullein seed weevils were introduced for the purpose of eating mullein seeds, which they do with about 50% efficiency. The BugLady was thinking, as she photographed the weevils, that (speaking of crab spiders) their trip to the honeymoon suite might not turn out as planned. 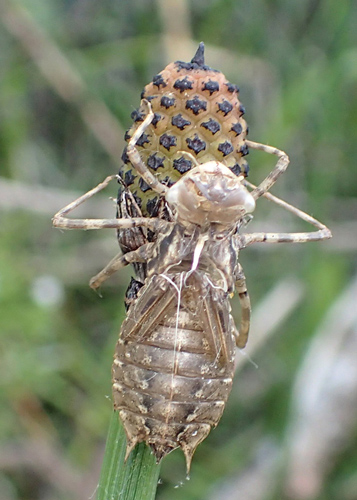 And finally, spring is a time of rebirth, renewal, and resurrection. What better symbol of that spirit than the empty shell (exuvia) of a baskettail dragonfly naiad that emerged from a winter spent in the watery world below the ice, climbed up (in this case) the stalk of a horsetail/equisetum, broke out of its old skin, and cast its die as a creature of the air?