The BugLady got her first Stonefly report about a month ago, and with the Big Thaw that’s happening here in God’s Country, she thought she’d “freshen up” this episode that originally appeared in March of 2008. That was the plan, anyway, until the information took the bit in its teeth and galloped off in a different direction. The BugLady loves when that happens.

Not a true fly (which are Diptera—“two wings”), stoneflies belong to the order Plecoptera (“folded wings”). Stoneflies have two sets of wings, on which they fly weakly and which they tuck tightly across their body when at rest. Plecoptera comes from the Greek plektos meaning twisted or braided, and pteron meaning wing. Bugguide.net says the name refers to the wing tips, which are folded at the rear; other sources say that it refers to some veins that crisscross in the wings. 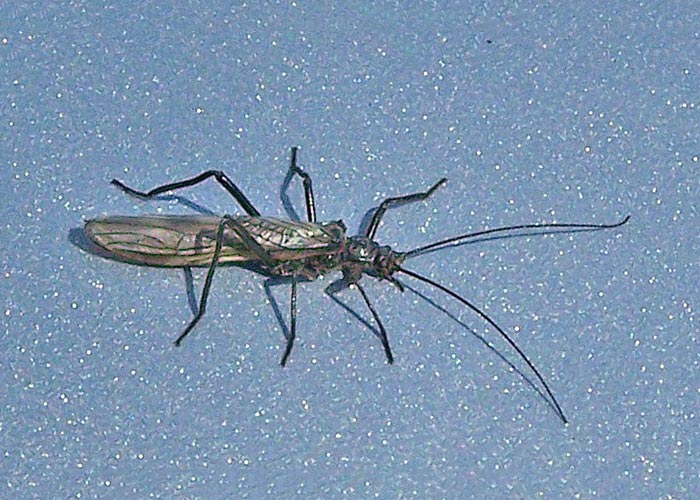 It’s a primitive group of insects that’s been around for more than 300 million years. In Doc Leonard’s Lecture Notes on Plecoptera, the Doc states that “It may be suitable to close this portion of the discussion on Plecoptera by repeating the frequently made observation that stoneflies, both as naiads and even more as adults, look like aquatic cockroaches.” Indeed, a number of sources noted that stoneflies may be closely related to the earwigs, grasshoppers, cockroaches, and/or a group called the Embioptera/Embiidina, or web spinners.

The BugLady found estimates of between 450 and nearly 700 stonefly species in North America, and there are plenty more elsewhere; as always, new species being discovered regularly. There are three major families: the Taeniopterygidae, the winter stoneflies, which have the lovely alternate common name of “willowflies” and which emerge from January to April; the Nemouridae, the spring stoneflies that emerge from April to June; and the largest family, the Perlidae, or “common stoneflies” that emerge from April to September. The BugLady suspects that the stonefly posing on the leaf is a Perla species in the Family Perlidae, and the others may be the Early black stonefly/Boreal willowfly (Taeniopteryx nivalis), or the Eastern willowfly, (T. burksi), in the family Taeniopterygidae. More about that later.

Stonefly naiads are aquatic and are found under rocks on rocky shores or clinging to rocks/gravel/branches/tree roots/debris/plants in the beds of flowing, well-oxygenated waters. In the far north, they are also found in cold lakes. Overall, stonefly naiads are not tolerant of pollution and so are used as indicators of water quality. Naiads are flat, and they bear two strong claws on each tarsus (foot) so they can hang on and resist the pull of the current across whatever they cling to; they are not strong swimmers. 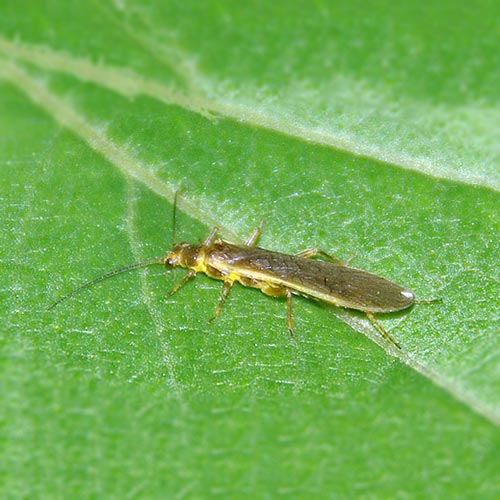 They breathe using gills in their “armpits” and at the base of their two tails (cerci). When oxygen is low, they do push-ups in an attempt to increase water circulation. Stoneflies have incomplete/simple metamorphosis and the naiads look very much like the adults they will become. They add wings and reproductive organs as they molt, in some species as many as several dozen times (they may spend up to three years as naiads). Adults don’t venture far from water.

Most stonefly naiads are classed as shredders or as detritivores (depending on whether they eat large pieces of vegetation or tiny ones), feeding on algae, diatoms, and plant material that falls into the water. Naiads of some groups of stoneflies (like the Perla species) are predators on aquatic invertebrates, including other stonefly naiads. The mouthparts of leaf-eaters are shaped for grinding, and carnivores have protruding mouthparts. Because they are trout food, they are featured on websites about fly-tying, and there are, of course, YouTube videos on the subject. Most adults do not feed during their brief lives, but the adults of the Taeniopterygidae do consume blue-green algae or lichens (reproduction is costly, energy-wise, and so is staying “warm” in February). In some species, successful mating depends on the adults’ feeding on specific tree trunk algae. 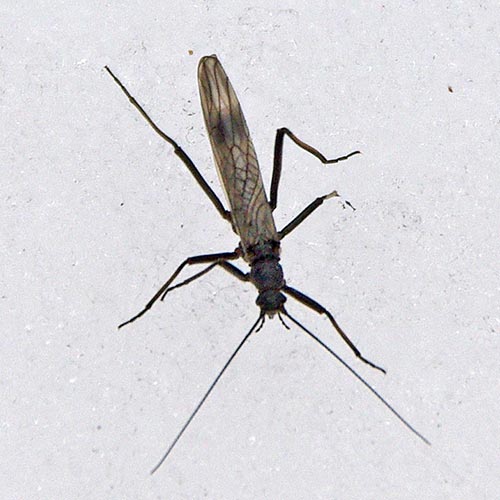 Kaufman and Eaton, in the Field Guide to Insects of North America, say that the males of many species drum their abdomens against the twigs and foliage they sit on in order to attract nearby females. Soon afterward, females lay eggs (from 200 to thousands). She oviposits by flying over the water and dipping or dropping the eggs in, or by crawling out onto the water and fixing her eggs to something solid, even ducking below the surface to do so. The eggs are described as being sticky or having projections on them that catch and anchor the egg to the substrate.

The eggs hatch quickly (or go into diapause to get through winter or a dry spell), and they grow quickly, too (unless the water is very cold). When it’s time to emerge, naiads leave the water and crawl inches (or feet) up onto land, performing this bit of magic away from their fishy predators. The caddisflies and mayflies that live in streams metamorphose into adults while in the water; for this reason, they are more important to trout, which have a chance to snag both the naiad and the adult. Trout will feed on ovipositing female stoneflies. 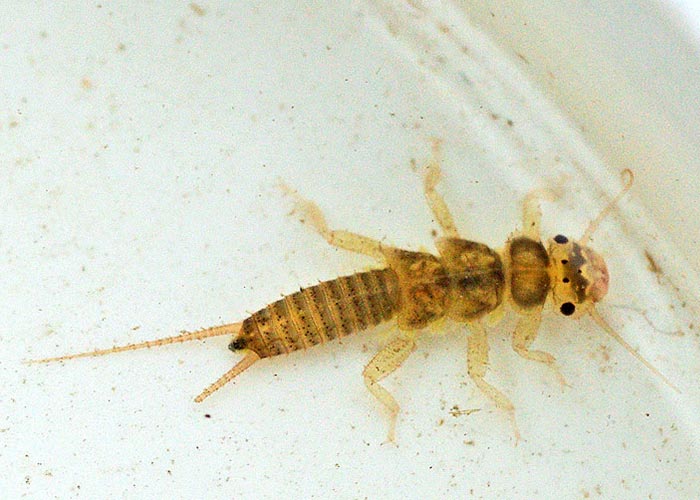 Now, about Taeniopteryx nivalis, et al. Here are insects that challenge our notion of cold-bloodedness, reproducing when there’s still snow on the ground. Research shows that they start to emerge when water temperatures reach the mid-to-high-40’s, with naiads moving into shallower water and finally crawling out above the water level. According to researchers Sephton and Hynes, Boreal willowflies emerge in March in Ontario and lay eggs, and the eggs hatch six to ten weeks later. They go through four instars (the feeding period between molts) and then spend July through late September in diapause (suspended animation) in the fourth instar. Their final molt as naiads occurs in late-December-to-late-January (for a total of 13 instars). Adults seem to like to sit on concrete bridges by streams, and they’re frequently seen on snow.

Check out this stonefly postage stamp.

The website du jour is Troutnut.com, which is dedicated to learning about aquatic insects in order to tie realistic flies. Scroll down to the bottom of the Fly Fishing Forum home page for their excellent forum rules. No trolls allowed on troutnut!