Anyway, here we have a Green Stinkbug and the spotted nymph of (probably) the Green Stink Bug—or of another species to be named later. As one book says, the stinkbugs include some of the worst garden pests in the insect world, and they smell bad, too. They get their name from the stink glands located on the ventral side of their bodies (ventral—the opposite of dorsal), and if attacked, they can jettison a goodly amount of stinky liquid. Some people suggest the name “stinkbug” for the newly arrived and decidedly aromatic Asian Ladybugs (not Bugs but Beetles), whose odor is stronger if their color is darker.

Though some stinkbugs are predators, Green stink bugs drink the juice from a wide variety of leaves, flowers and fruits. The BugLady’s favorite stinkbug memories are of picking raspberries and hearing stinkbugs flying noisily in to land on the berries. 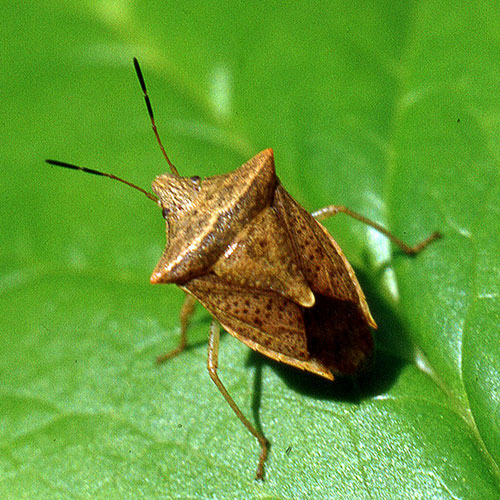 Once, the Bug Lady saw a picture of a group of stinkbug nymphs clustered around their recently-vacated eggs, and the caption explained that they were eating their eggs and that in so doing, they were also ingesting bacteria from their mother’s gut that would set up shop in their guts and allow them to digest, for life, the cellulose materials they ate!