The BugLady now lives on the edge of a sand dune, with some pine and spruce around the edges, and she’s looking forward to meeting her new six and eight-legged neighbors. This stag beetle is the first species to step up (thanks, BugFan Becca, for the fancy footwork).

We have seen stag beetles (family Lucanidae) in these pages before, in the form of the Antelope beetle. There are maybe 1050 species worldwide, with about 30 of those residing in North America and five in Wisconsin. As a family, they’re among our most impressive beetles. Those mandibles/pinchers (“pinching bug” is a common name—watch out for the business end of these beetles) endear them to the scientific community; the variability in size and shape of the mandibles has fueled a century-and-a-half of discussions about exactly how a species is defined. Within a species, scientists rank males with larger and fancier mandibles as male majors/high males and those with lesser mandibles as male minors/low males (body shaming in beetles?? Seriously??). 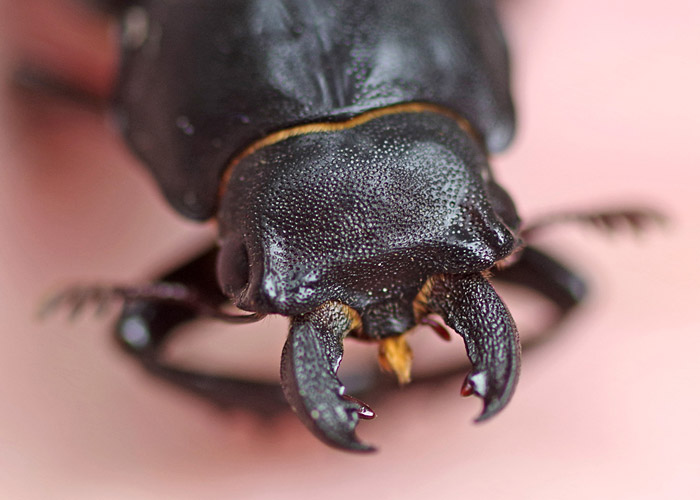 They are also, of course, prized by collectors, and there are any number of websites that sell them, dead or alive.

Lucanus placidus (it used to be listed in the genus Pseudolucanus), doesn’t have a common name, but its species name means “smooth” or “pleasing,” so let’s call it the Pleasing stag beetle. Here’s another North American member of the same genus, a beetle whose range is just south of Wisconsin.

Pleasing stag beetles can grow as long as an inch-and-a-half. They are often dark, but they also come in a rusty color, and they have an amber-colored patch at the base of the front legs. The surface of the elytra (the stiff, modified first pair of wings that covers the flying wings) is described as “shagreen,” which means that it has a roughish or granular texture, like shark skin. They are chunkier than most other stag beetles and their mandibles are relatively short.

Like other Lucanids, they are sexually dimorphic—males are bigger than females, a reversal of the usual insect practice. The female’s mandibles are smaller than the male’s, with a single tooth at the inner tip, and the male’s are larger and toothier. The size of the mandibles and the number of teeth they bear differs among males of the same species, and a single individual may not even have symmetrical mandibles. 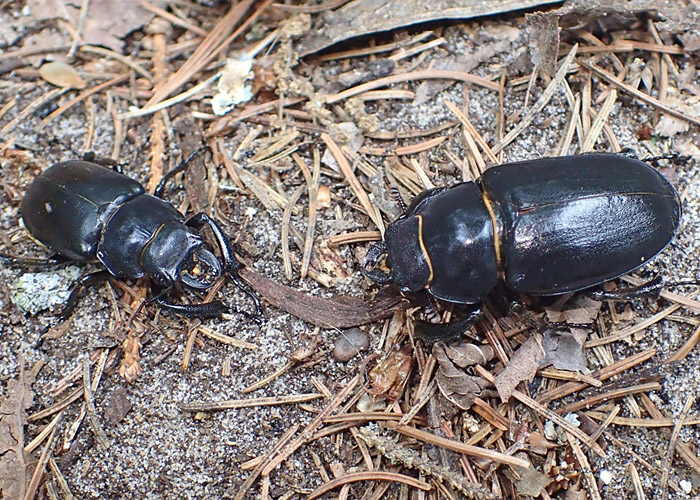 She has fancier front legs (tibia), though, with four long combs. Those strong, front legs are used to dig tunnels six to eight inches deep, in which the adults escape the heat of the day. After they were captured outside her back stoop, the BugLady refrigerated these beetles overnight (to slow them down a bit for their pictures), and when she photographed them where they had been found the night before, she found a beetle-sized hole right there!

Females, attract their suitors by releasing pheromones/perfumes into the air, sometimes with dramatic effects, and males use their mandibles to do battle for the favors of the females. Some observers have reported remarkable assemblages of these normally secretive beetles. For a great story by someone who was, suddenly, beetle-rich, read http://labs.russell.wisc.edu/insectlab/2016/06/23/buckets-of-beetles/. The experts advise us that it’s not necessary to get out the pesticide—Pleasant stag beetles have a short shelf life and will be gone in a week or two.

Not a lot is known about Pleasant stag beetle biology, and their larvae are very difficult to distinguish from those of their close relatives. Eggs may be deposited in sod, and the larvae migrate from there to find their preferred food source. They feed about a foot below the surface of the soil and pupate in the ground, and when they become adults, they wait below the surface until dark to emerge.