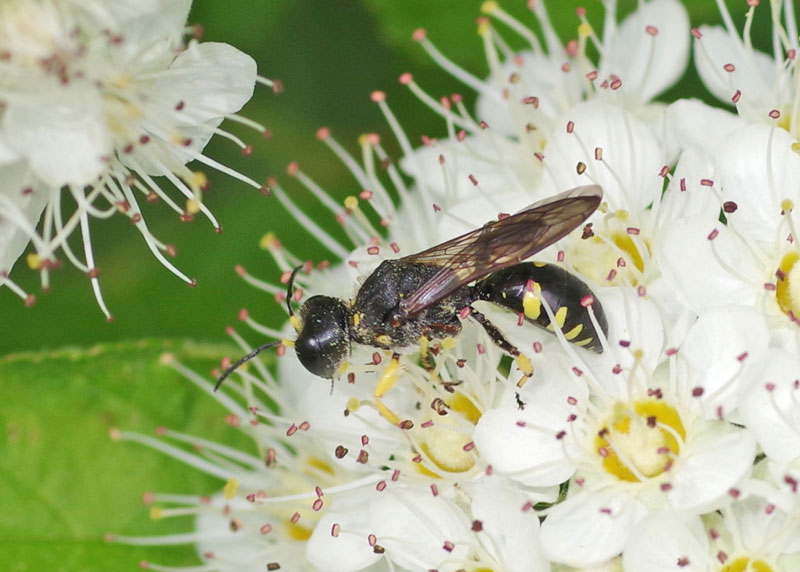 The BugLady is living proof that there’s a big difference between looking and seeing. For years, she’s been photographing these little black and yellow wasps and filing them under “Potter wasps,” but she had an “Oh Duh” moment this summer, and yeah, yeah—she sees it now. As Henry David Thoreau once said, “We must look a long time before we can see.” 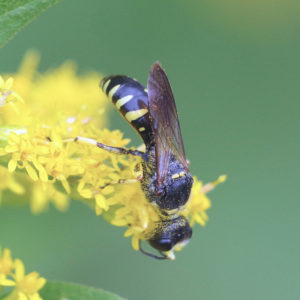 So—not potter wasps — these are Square-headed wasps in the family Crabronidae.  Members of the family were formerly placed in the Thread-waisted wasp family Sphecidae, a family that includes some conspicuous beauties like the Blue mud dauber, the Black and yellow mud dauber, the Great golden digger wasp, and the Great black wasp, but now they’re viewed as a separate family. Stand by for further taxonomic tweaking.

We have visited the Crabronidae before, in the form of the organ-pipe mud daubers  and the sand wasps . It’s a large and diverse bunch, with about 9,000 species worldwide (1,225 in North America).

The name “Square-headed wasps” only applies to species in the subfamily Crabroninae, which has 4,700 species (520 here)—a number of sources call them digger wasps.

Square-headed wasps are solitary wasps that use their impressive jaws  to make nests in the ground, in hollow stems, in the pith of broken stems, and in old galleries (tunnels) chewed in wood by beetle larvae. 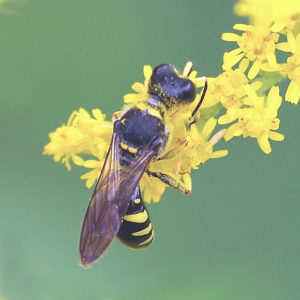 Solitary wasps typically create an egg chamber and stuff killed/stunned/bitten/stung spiders and/or small insects into it (scroll down to the fly-stuffed stem ). Here’s a Square-headed wasp with a crane fly . Mom lays an egg on one of the bodies, closes the chamber up, and moves on. The carnivorous larva hatches out into its own personal pantry stocked with enough food to get it to the pupal stage. Some species of Crabronids, like the sand wasp above, do what’s called “progressive provisioning.” Instead of providing a cache, the female sticks around her egg tunnels and brings food to her developing young, but Square-headed wasps seem to use the standard method. Many Square-headed wasps are very specific about the kinds of insects they pursue. Adults feed on nectar. 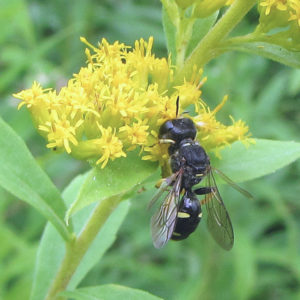 The first question (but never the last, of course) is “which Square-headed wasp is this?” Alas, the BugLady can’t provide a definitive answer. She thinks she’s photographed several species, and she’s been squinting at pictures until she’s cross-eyed. She’s guessing that her wasps are either in the genus Lestica (three species in North America), or Ectimnius  (27 species), or Crossocerus the Equilateral Square-headed Wasps (!) (40 species in North America but only a few have yellow markings on the abdomen). They are differentiated by field marks like the sharpness of the longitudinal grooves along the inner eye margin. BugFans are always welcome to weigh in.

Their MO’s are similar, differing slightly in the medium they pick for their egg chambers and the type of insect they hunt in behalf of their young.

Bugs in the News IX