A Celebration of Chalk-fronted corporals and white-faces and white-tails and clubtails and baskettails and the Racket-tailed emeralds in the air and on rocks and trails and vegetation. The migratory population of Common green darners now ovipositing in shallow waters will soon die out, their place in the skies taken over for the summer by the native population, which has been waiting under the ice throughout the winter. Ahhhh spring! 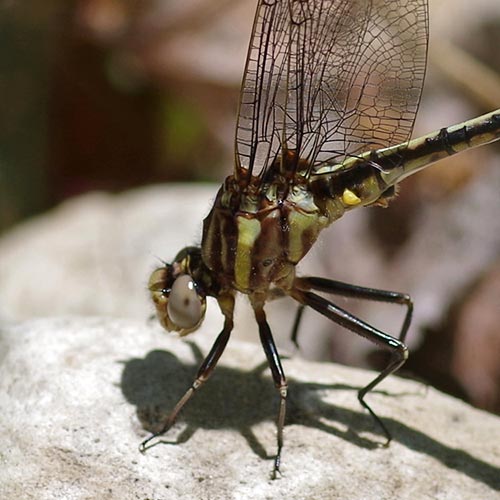 Various species of (mostly) blue-patterned mosaic darners (of previous BOTW fame) are common in late summer and fall, but an early, mosaic-looking darner called the Springtime darner is most active from mid-May through the end of June in Wisconsin. 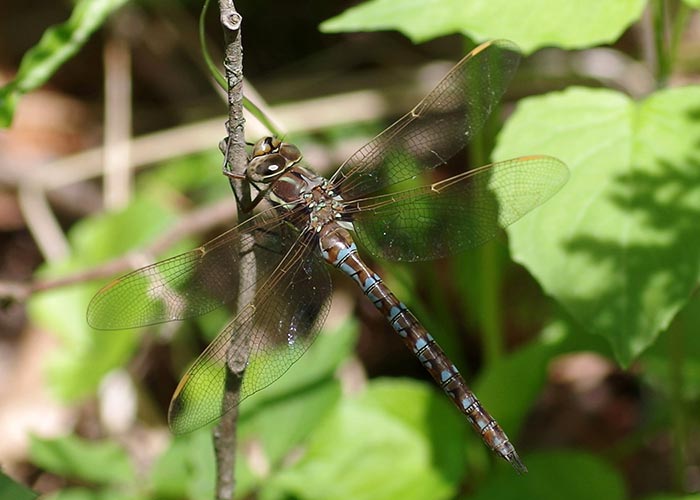 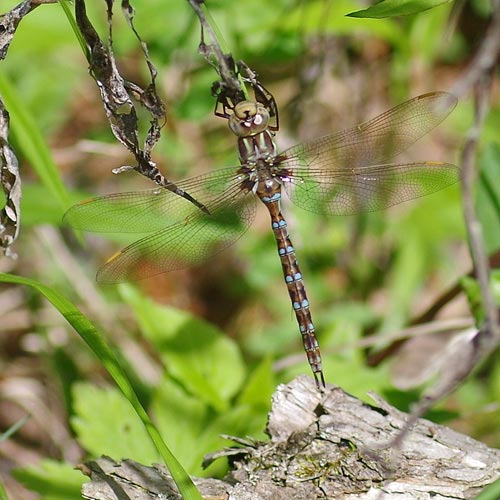 Springtime darners (Basiaeschna janata) are not mosaic darners (genus Aeshna); they are a monotypic genus—the only member of their genus in the world. At about 2 ¼” to 2 ½” (females are larger than males) they are a bit smaller than the mosaics. Springtime darners are commonly seen cruising around in woodland clearings, and along sunny edges of lakes, bogs, and slow streams in eastern North America.

Like other dragonflies and damselflies, they are happy carnivores, both as adults and as aquatic naiads. Damselflies, caught as the darners patrol low over the water along the shoreline, are part of their menu. Springtime darners like the sun, but they also fly in the shadows and into the evening. Several Springtime darners may hunt over a field, often high above the ground, but they aren’t found in mixed-species feeding swarms.

According to Kurt Mead in Dragonflies of the North Woods, “males patrol an irregular beat following the shoreline. Along streams, they may bounce from bank to bank.” Females deposit their eggs in incisions that they make in the stems and leaves of aquatic vegetation, sometimes resting on floating leaves as they do. Mead tells us that the “female lays eggs in submerged aquatic plants by puncturing the stem with her ovipositor in a zigzag pattern—much like a sewing machine—leaving a double row of eggs behind”. At rest, Springtime darners perch vertically or at an angle, often on low vegetation, making them hard to spot and tricky to photograph (“When Good Dragonflies Pick Bad Backgrounds”).

The Springtime darner’s full scientific designation is Basiaeschna janata (Say, 1839), which means that in 1839 it was officially described and welcomed aboard by someone named Say. Who was he? Here’s the second of an occasional series of sidebars titled “Who Were Those Guys?”—brief biographies of the early scientists and naturalists.

Thomas Say (June 27, 1787 – October 10, 1834) was one of those incredible, all-around naturalists and scientists who lived and wrote during the second half of the eighteenth century and the beginning of the nineteenth. His great grandfather was John Bartram; his Great uncle was William Bartram, and he was acquainted with Constantine Rafinesque (and let’s throw in Peter Kalm, too, for good measure; although he lived a little earlier, he was cut from the same cloth). Alexander Wilson and John James Audubon were painting birds during this time, too. These inquisitive men roamed Colonial America and recorded their observations on plants, animals, geology, culture (both Native and European), food, medicine and more, and their journals make grand reading.

Say was a malacologist (snails, slugs and clams), carcinologist (crustaceans), herpetologist (herps), and he was called the Father of descriptive entomology (bugs). As a taxonomist, Say was responsible for describing more than 1,500 new species of insects, many of them beetles.

He was a self-taught naturalist and a founding member of the Academy of Natural Sciences of Philadelphia. He served as a zoologist on expeditions that took him to Florida, Georgia, and to the western frontier as far west as the Rockies (his was the first scientific description of the coyote). He wrote the six-part American Conchology, or Descriptions of the Shells of North America Illustrated From Coloured Figures From Original Drawings Executed from Nature, and the exquisitely-illustrated, three-volume American Entomology, or Descriptions of the Insects of North America (a commercial flop, according to one source because it competed with Wilson’s writings about birds; apparently (some) people like birds more than bugs).

Although he lived like a hermit, Thomas Say moved in some pretty lofty intellectual circles. In December of 1825 he joined an idealistic group of scientists, educators and thinkers who boarded a keelboat in Pittsburgh and headed for a Utopian community in New Harmony, Indiana, a trek that became known as the “Boatload of Knowledge” (an event that was, sadly, neglected in any history course that the BugLady ever took). It was said at the time that the boat “contained more learning that was ever before contained on a boat.”

Their trip down the icy Ohio River was rigorous;

December 11, 1825, to January 9, 1826, twenty-eight days during which the keelboat was stuck in the ice at Safe Harbor station only fifteen miles below Economy and eight miles above Beaver, Pennsylvania. Safe Harbor must have seemed a misnomer to the marooned party. The first full day there two of Phiquepal’s boys fell through the ice in the middle of the river. Nobody was near enough to help them, but they could swim and got out on their own. Later, Dr. Price “fell into the river through the ice up to his neck, but got out without other inconvenience than a good wetting.

Beaver, PA is less than 30 miles northwest (downstream) of Pittsburgh, as the river flows. To appreciate their journey fully, go to a Google Map of western PA and then drag the map to follow the Ohio to Cincinnati and beyond. For more about the Boatload of Knowledge, see: this article from The Ohio Journal of Science.

The New Harmony experiment dissolved in 1829, but Say stayed on and continued to work and publish, and the settlement attracted and produced scientists, University presidents, politicians, and thinkers.

Ants in my Plants