The BugLady is out looking at Bugs, so this episode is swiped and slightly revised from the Bog Haunter, the newsletter of the Friends of the Cedarburg Bog (and we’d love to have you join the Friends). Plagiarism? No worries—the BugLady writes most of the Bog Haunter.

A genuine, sometimes tentative, sign of spring in the Cedarburg Bog is the reappearance of dragonflies, but the first sightings may not be of local individuals. Common Green Darners (whose scientific name, Anax junius, means “Lord of June”) migrate south in fall and repopulate the north country each spring. They return, often when the snow still lies in sheltered spots, as the insects they prey on take to the air. 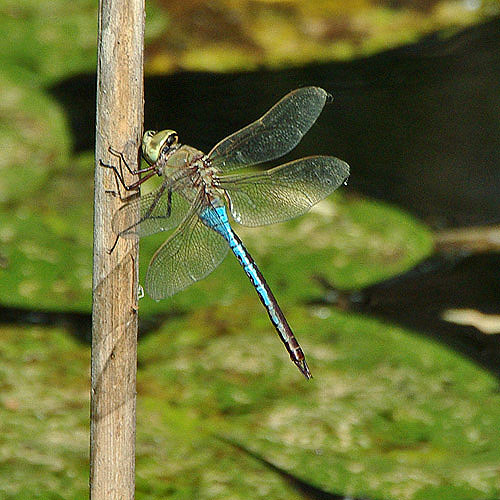 The Green Darners that deliver the spring lay eggs that hatch into naiads that take the whole summer to mature. These offspring will make the trip south in fall (fall dragonfly flights along the Lake Michigan shoreline can be awesome), and the generation after that will return to Wisconsin. Darners are big insects, with bodies exceeding three inches and wingspans of four-plus inches. Both sexes have a green thorax, but the male’s abdomen is blue and the female’s is brownish. They have wrap-around compound eyes (each containing up to 50,000 simple eyes) and a “Cyclops-like” eyespot in front of their eyes. There is increasing speculation that in addition to its spring migrants, Wisconsin may have a resident population of darners that is emerging, too. Each year, the BugLady puts “A good, in-focus, in-the-same-county darner picture” on her wish list, but the darn(er) things never land, and they use all those eyes to spot photographers.

The warming of the water in spring is a powerful and irrevocable trigger. Water changes temperature slowly—a lot of energy is needed to move it just a few degrees in either direction. The next dragonflies on the scene signal that the water has warmed. Their naiads, which spend the winter under the ice, crawl out of the water and out of their nymphal skins, pump up their wings and become creatures of the air, chasing their prey—flashes of wings that they spot from perches or while they are hovering.

Common Baskettails are drab dragonflies in the Emerald family (Corduliidae). They sport muted orange bars on a black abdomen, short, gray hairs on their thorax (a warming device for the all-important thorax?), and a black spot at the base of each hind wing. Like the darners, they perch vertically rather than horizontally, often hanging down from a twig tip. Baskettails are agile flyers that may be seen in the afternoon hunting in groups over swarms of smaller insects like midges. 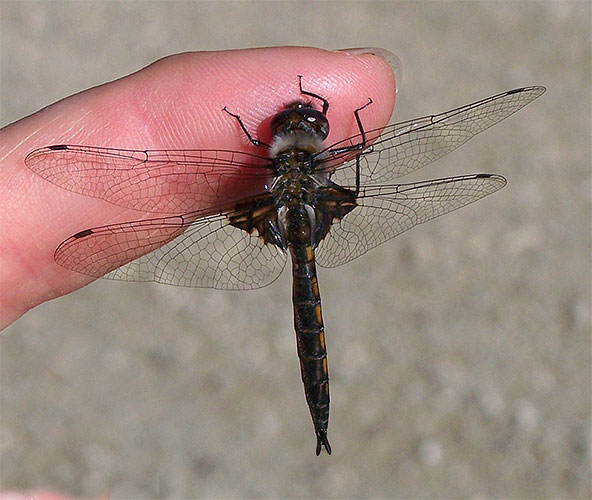 Chalk-fronted Corporals (Ladonia julia) are northern dragonflies that emerge in early May. On cool days, hundreds congregate on warm road surfaces around the Field Station. They have been known to follow walkers and feed on the various bloodsucking flying insects that accompany the warm-blooded. Adult males have white “corporal’s stripes” on the first segment of their thorax, white on the first few segments of their abdomen, and small black spots at the base of all four wings. 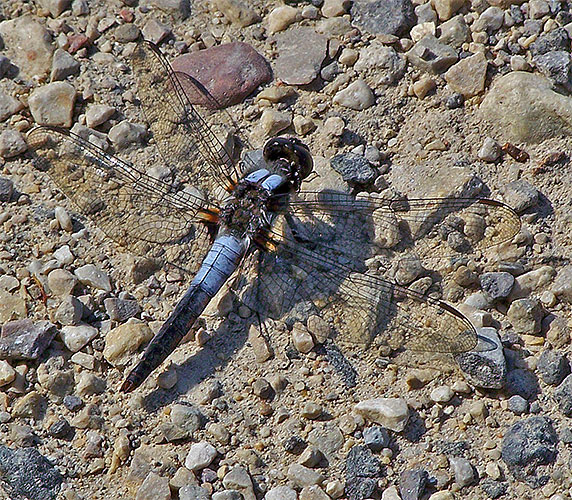 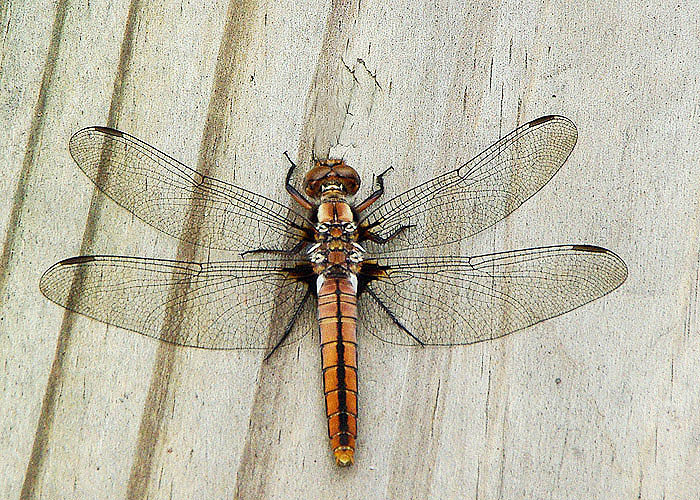