Adult antlions resemble damselflies with long, clubbed antennae. They fold their wings over their backs at rest (when they are alive…), and they are weak, nocturnal flyers that are attracted to lights (in this case, falling prey to a spider that laid her trap wisely). Antlions are in the order Neuroptera, the nerve-winged insects named for the network of veins in their wings. The ranks of neuropterans also include fishflies, Dobsonflies, lacewings and some real oddballs. There are about 100 antlion species in North America and some 2,000 total, in the world. 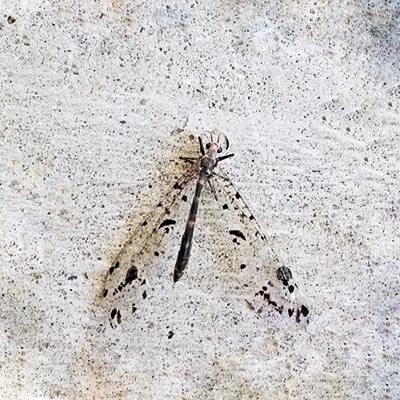 Antlions reside in the family Myrmeleontidae, which, in Greek, means ant lion! They are named for their nymphal/larval stage; adults do not have a separate name in English but do in some other languages (like “ant damselfly” in German and “silken dragonfly” in Korean). According to Wikipedia, their name is an old one (though not as old as the insects themselves—antlions go back 150 million years). Other common names invoke bulls or demons, a nod to the horn-like appearance of the larva’s jaws. 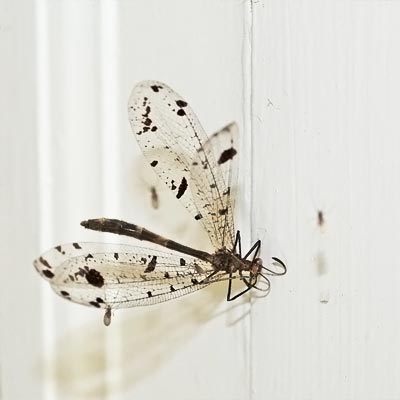 Antlion nymphs are also called doodlebugs, because the trails they leave in the sand look like random scribbling or drawing—doodles. When it comes to doodlebugs, one picture is worth 1000 words; check out bugguide.net! The raison d’etre of many species is to create mini-craters with which to trap their prey. Not all doodlebugs dig traps; some hang out under bark or leaves; some (like the Spotted-winged antlion) in crevices or tree holes; and some simply wait, immersed in sand up to their
neck, jaws at the ready. They are found where the soil is “dig-able”—soft, sandy, dry, and shady, worldwide.

The Spotted-winged antlion (Dendroleon obsoletus) (and what a fine scientific name that is—a “wood-lion,” seldom observed!) is found in the southeastern two-thirds if the U.S., as far north as Iowa and New Hampshire, west to Arizona. The pink band on its pointed antennae is diagnostic, as are the random, round splotches on its wings. Besides dry tree holes, its nymphs are also found sharing the tunnels of gopher tortoises in Florida.

Spotted-winged antlions are not a pit-digging doodlebug, but that process is worth describing. Doodlebugs start by “doodling” a circle around their proposed pit. Then they walk (in “Reverse”—doodlebugs don’t seem to have a “Forward” gear) around and around their circle, moving from its outside toward the center, plying their abdomen as a plow or shovel. According to Wikipedia, the nymph uses its front legs to pile loose bits of sand/soil on its head, and then it jerks its head and tosses the load out of the pit. It keeps walking and tossing until the sides of the pit reach the “angle of repose”—when more digging would cause collapse. A large pit might be three inches across and two inches deep.

When it’s finished, the doodlebug conceals itself under the sand at the bottom of the hole and waits, jaws exposed and spread. When an ant (even a fire ant), other small insect, or spider enters the trap, it slides to the bottom where it is grabbed. If the prey tries to escape the pit, the doodlebug throws sand at it; the impact makes the sides of the pit slide down toward the waiting predator. The doodlebug’s hairy exterior gives it traction; once it has its prey “in hand,” the doodlebug injects a venom/saliva, slurps out the innards, and then tosses the empty husk of its prey up out of its pit.

Mama antlion lays her eggs in tree holes or on the ground, sometimes tapping the surface a few times and then inserting her egg into the sand. The resulting doodlebugs may spend a few years as nymphs, depending on how well they eat. As the well-fed doodlebug grows, the size of its prey and of its pit also increases. Antlions spend a month at the bottom of their pit in a spherical pupal case of sand and of silk (silk spun from a gland located at its rear). Adults live for three to six weeks, and sources disagree about whether they eat—some say no; some say they feed on nectar and pollen; some add tiny invertebrates to the diet.

The BugLady’s favorite antlion story is about Charles Darwin. When Darwin (who was a very religious man) reached Australia, he was momentarily thrown for a loop. The Australian animals were so fantastical compared to those of the rest of the world that he considered, briefly, that there might be two Creators. But then he saw a doodlebug, an insect he was familiar with from England, and was satisfied that there was only one.

Bugs Without Bios I