Some brave pussy willows were peeking out from behind their bud scales recently, reminding the BugLady that pussy willows are grand for bug watching in the early days of spring. (It’s the male catkins, fuzzy gray in their early stages, that give the plant its popular name; their fuzz protects these early bloomers against the cold). The lovely little bee that is admiring the pussy willows is the Spotted nomad bee (Nomada maculata) (probably). 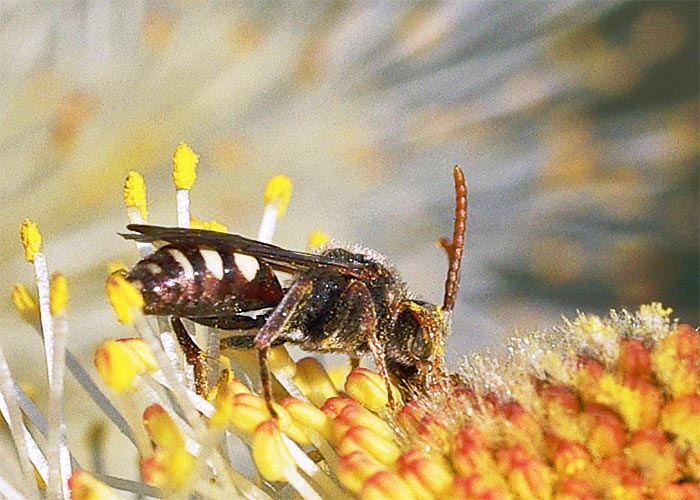 The BugLady has been wading around in the murky pool of bee taxonomy again. She is sure that BugFans recall the basics of classification—progressing from largest/broadest taxonomic grouping to the narrowest/most specific, organisms are placed in a Kingdom, Phylum, Class, Order, Family, Genus and Species. Some groups of insects are so complicated that further breakdown is needed in between those familiar landmarks, so we get subfamilies and tribes and subgenera and other constructions (Remember—this is all so that their classification makes sense in our eyes—the organisms themselves know who they are).

The bottom line is that the SNB, which is in the big, bee family Apidae, is in the subfamily Nomadinae (Cuckoo bees), and not in the subfamily Apinae, which contains lots of our familiar bees like honey, bumble, carpenter, sweat, digger, and long-horned bees (all of previous BOTW fame). Cuckoo bees are found worldwide.

The BugLady’s research became extra knotty because the term “cuckoo bee” refers to a lifestyle (not a mental state) that is practiced across a variety of families of bees, many of which are in the subfamily Apinae and which are called, generically, “cuckoo bees.” The BugLady built up a good head of research steam and then realized (to mix a whole bunch of metaphors) that she was fishing in the wrong pool.

The Nomada (nomad/roaming bees), one of the largest genera in the Nomadinae subfamily, are a confusing bunch taxonomically. There are about 300 species in North America and 700 species worldwide. The SNB belongs to an overlapping continuum of species named the Nomada ruficornis species group. According to University Studies, published by the University of Nebraska (Lincoln campus) in 1912,

It might also be noted in passing that when the genus Nomada is monographed, it will be necessary for the taxonomist to have a very large amount of material from many localities to discover the truth in the apparently very great individual and geographic variation, and great care must be exercised in the proper matching of the sexes. Undoubtedly when this is done, the current number of nominal species will be greatly reduced.

The genus Nomada is, in a broad sense, comprised of a large complex of forms, over 270 named species and subspecies from North America alone…. The group as a whole seems to intergrade at various points in practically every promising character which has been employed and tested, so that an absolute separation on these characters would place closely allied forms wide apart and bring together forms quite unalike…the possibility of dividing Nomada into good genera seems quite remote.

Why are they called cuckoo bees? Because like European (but not North American) cuckoo birds, they leave their eggs in someone else’s nest (generally that of a small, solitary, ground or wood-nesting bee) instead of building their own. Some species of Nomada are highly specialized, invading the nest of only a single host species. The SMB parasitizes the nests of Andrena mining bees and some Halictid sweat bees; and both its geographic range and its flight season match that of its hosts.

A female SNB flies low over the ground, watching for her cousins to exit their carefully crafted tunnels in dirt or wood; searching for the scent laid down by the helpful male SNB, who hunts for tunnels in her behalf and who marks them for her with pheromones. The host bee constructs small chambers along the sides of her tunnel, provisioning each cell with pollen to feed the larva that will emerge from the single egg she’ll lay there. The female NB waits for the tunnel’s owner to leave on a collecting trip and zips in, inserting several small eggs into the wall of a finished or almost-finished chamber.

Nomad bees are kleptoparasites/cleptoparasites, which means that their offspring will steal the cache of food supplies that the host left for her own larvae. In fact, the first NB egg that hatches dispatches its own siblings before it eats the food supply and then kills and eats the host larva. A first instar NB larva (an instar is the feeding stage before a molt) is equipped with heavy mandibles that helps it kill its rivals. The NB larva pupates in the tunnel and emerges in spring with what is left of the host bees from other cells. 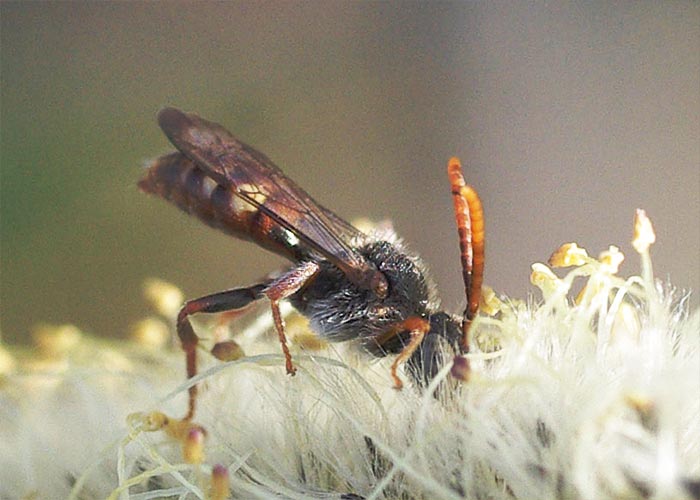 Adults can be found nectaring on flowers in a characteristic “butts-up” position. Because they do not collect pollen for their young, female NBs are relatively hairless and they lack the pollen-carrying structures that their hosts have. Males are smaller and hairier than females.

FYI, the BugLady photographed this mystery bug in the Bog on Sunday, near a pool of melt water. What could it be? 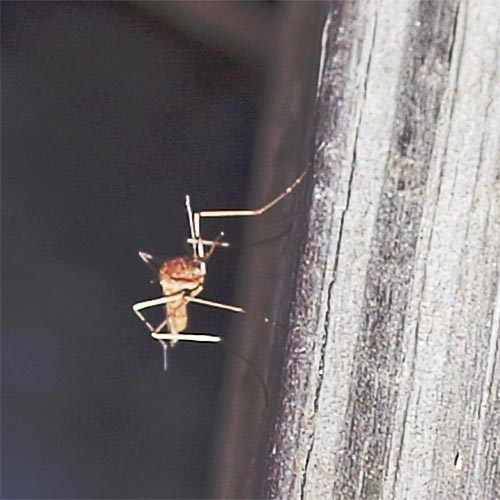