The BugLady frequently writes about (and climbs up on her soapbox about) bugs that find themselves on Exterminators’ hit lists for, it seems, no other crime than being bugs. The Dragonfly Woman, in a recent blog post, even reports seeing “We’ll take care of your dragonfly problems (problem dragonflies?)” messages in exterminators’ ads! The BugLady guesses that last summer’s country-wide, conspicuous-but-benign dragonfly swarms alarmed people (for more info about dragonfly swarms, check out The Dragonfly Woman‘s site).

The Spotted Cucumber Beetle (SCB), however, comes by its bad reputation honestly. Turns out that “cucumber beetle” is kind of a generic name for beetles (of several genera) that wander around on plants in the squash/melon/cucumber group. Today’s star, the (eastern) SCB, is Diabrotica undecimpunctata (formerly duodecimpuncta howardi (have at it, Classical Language Scholars). It is also called the 12-spotted cucumber beetle, the Southern corn rootworm (a nod to its larva), and probably a bunch of names that the BugLady can’t print in this allegedly family-oriented series. It is closely related to the striped cucumber beetle. Despite its name, it can be found on many different kinds of plants in farmlands, gardens and grasslands over the eastern half of the U.S. The SCB is a homegrown pest which we have inadvertently exported to several European countries in the last two decades. 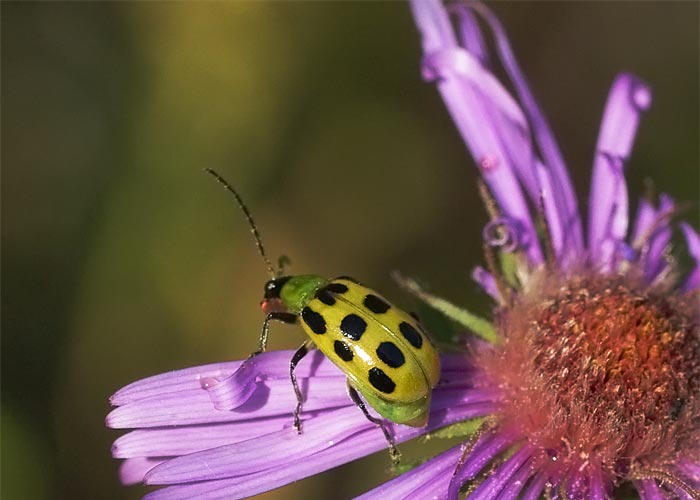 Beetles practice complete metamorphosis; they grow from egg to larva (beetle larvae are also called grubs) to pupa to adult. Insects with complete metamorphosis often change mouthparts/diets/habitats when they mature. In the case of the SCB, the larvae burrow into the roots of corn and cucurbits (melons/squash/cucumber) and feed there for 2 to 4 weeks. The plants are killed or stunted, and afflicted corn may not produce ears. The larvae pupate in the soil, and the adult beetles emerge to feed on the tender leaves, buds and petals of agricultural crops, ornamental plantings, flowers, and on melon rinds—over 270 species of plants in all.

There are several generations per summer in more southerly climes, where the final generation overwinters as adults in crop fields, compost heaps, leaf litter, and fencerows, emerging in spring to start the cycle again. According to one source, it’s too cold here in God’s Country for SCBs to overwinter, but they recolonize annually by migrating north, arriving in late spring/early summer. 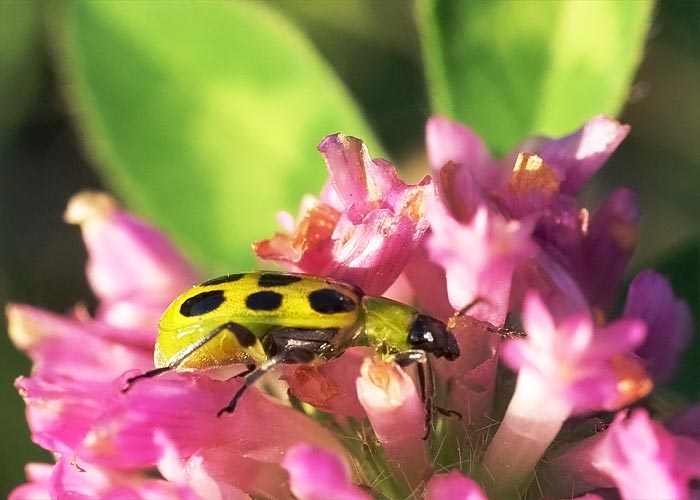 Simply dining on plants is enough to attract exterminators, but SCBs pack a one-two punch. They also carry and spread bacteria that cause a “wilt” disease and a virus that causes a mosaic disease, either of which is worse for the plant than simply being chewed on. The bacteria overwinter in the gut of adult SCBs, and when the beetles resume feeding in spring, they inoculate new plants with the organism. The BugLady read of a cool test for wilt: cut a stem of a suspect plant and squeeze each cut end to express some sticky sap. Then press the cut ends back together and slowly separate them again. If the plant is afflicted, the string of sap will look “ropey” due to the millions of bacteria it contains.

Avoiding the beetles is the only way to avoid the wilt. There are a number of chemicals you can throw at SCBs, and some organic and mechanical remedies, too. For the chemical-averse, strategies include early manual removal of the beetles (one site suggested using a dust-buster – seal and dispose of the contents properly); keeping cultivated areas clean of the litter that shelters the adults or conversely, applying a deep straw mulch to discourage pedestrian and egg-laying SCBs; surrounding plants with a trench filled with wood ashes (without getting any ashes on the plants); covering plants with row covers, screens or cones; planting rows of repellent plants like radish, nasturtium, tansy, catnip, broccoli, or goldenrod (but not marigold, which may attract SCBs and so might be used as a “trap crop”); fall cultivation that exposes insect eggs in the soil to colder temperatures; sticky traps; spreading onion skins or nematode worms or squares of tinfoil or Neem Oil on the soil; or attracting bats (!) (the BugLady would not have pegged SCBs as batfood).

What eats SCBs? A list of the usual suspects includes tachinid flies and parasitic wasps. Nematode worms prey on the larvae in the soil; soldier beetles may pick them off flower tops, and their eggs are fodder for lacewings and ladybird beetles.