PART ONE – THE BACKGROUND:

As we all know, there’s a huge difference between looking and seeing. The BugLady has a wooden pier across the top of the dune that protects her from Lake Michigan. One day, at the end of June, she looked down and had an “Oh, Duh!!!” moment when it finally registered that the little pits in the sand at the top of the dune were the handiwork of a fascinating insect called a doodlebug or antlion. 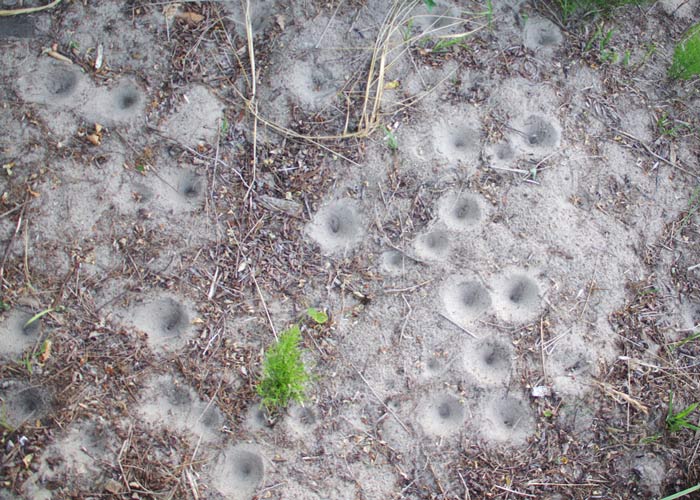 Eight years ago, she wrote about antlions in the person of the Spotted-winged antlion (mistakenly using the term “nymph” interchangeably with “larva” to describe the immature antlion – please disregard). Anyway, read the amazing story about how they dig pits and capture supper, and watch a great video of the same.

Antlions/doodlebugs are named for their immature stage, and there is no separate name for the adults, which don’t eat ants. They are in the family Myrmeleontidae, which is in the Order Neuroptera (the “nerve-winged” insects), an order that has some unique members like lacewings, mantisflies, owlflies, and more, but which no longer includes the dobsonflies (hellgrammites), alderflies, and fishflies (now in order Megaloptera).

The “doodle” in “doodlebug” refers to the squiggly trail that is left by a pit-digging larva as it walks around (backwards) looking for a place to excavate. Doodlebugs are usually found in places that are somewhat sheltered and are soft underfoot, like fine-grained soil, sawdust, tree holes, and, yes, dunes.

Adults look like damselflies, only more fragile; they are weak, crepuscular/nocturnal flyers that come in drab colors and have conspicuous antennae. Their larvae are the stuff of horror films – hairy, short-legged, and pear-shaped, with impressive, toothed mandibles that are not wasted on vegetables.

Adults are short-lived (maybe a month), but the larvae are not. Eggs are laid in a soft substrate, and when they hatch (in about a month) the larvae start to feed. Depending on food supply, they will spend between one and three years as larvae, molting three times before they pupate in a silk cocoon. They’ve been at it for 150 million years.

Doodlebug larvae feed on small invertebrates, but not all species dig pits – some ambush their prey above-ground (and those species walk frontwards, not backwards). In his Guide to Observing Insect Lives, Donald Stokes suggests that we drop an ant into a pit and watch the action. Several BugFans have confessed to the BugLady that they did this and then felt such remorse about the almost-inevitable Death from Below that they helped the ant to escape. A doodlebug injects toxic chemicals into its prey with its hollow “fangs,” pre-digesting the tissues and allowing the antlion to imbibe its prey’s liquefied innards. Adults eat pollen, nectar, and/or very small, soft insects; not much is really known about their feeding habits, but they sport impressive bristles on their legs.

Some birds have figured out that there’s something edible at the bottom of an antlion pit, and the BugLady read an account of a wasp that parasitizes doodlebugs by allowing herself to be grabbed, using her heavily armored hind legs to hold open those lethal jaws while she inserts an egg in the doodlebug’s neck, and then escaping, leaving her eventual larva to feed on doodlebug. And there’s also a bee fly whose larvae parasitize antlion larvae and pupae.

After the lightbulb finally went on, the BugLady established a Doodlebug Sanctuary and spent some time trying to photograph the pit-makers. She saw the adult in mid-August, about six weeks after she recognized the pits, and by mid-September, the larvae had stopped refreshing their pits after rainstorms (which could be their normal phenology, but we had lots of rain about then. We’ll see). 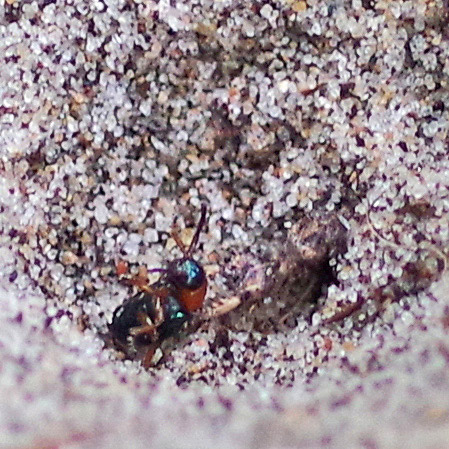 There are only about a half-dozen antlion species in Wisconsin, so coming up with an ID should be easy, right? One problem she encountered is that one antlion species looks pretty much like the next to the BugLady. Another is that species’ scientific names keep appearing and then totally disappearing from the literature.

She narrowed it down to two possibilities – Myrmeleon immaculatus, widely distributed in Wisconsin and in the US, and the much less common Cryptoleon signatum/Brachynemurus signatus. Most (but not all) sources say that antlions in the genus Brachynemurus chase their prey rather than making pits, and Myrmeleon immaculatus is listed in a WDNR bulletin as the only pit-builder in the state. Both are listed for Sheboygan County in a 972 survey, which contains a lovely account of light-trapping Brachynemurus signatus in the sand dunes of the county. Brachynemurus signatus has an abdomen that is much longer than its wings, but the adult that the BugLady photographed was only minutes old, and so may not have been done expanding or have developed its “finished colors.”

The BugLady found a common name for Myrmeleon immaculatus in a reference from 1897 – the Spotless Antlion. Its diet consists mainly of ants, but it will consider anything that it can overpower in its pit, like spiders, flies, mites, small beetles, and caterpillars. It will also consider cannibalism, especially when pits are densely spaced, and adults that emerge and walk across the sand looking for something vertical to climb must negotiate a minefield of occupied antlion pits on their journey.

Doodlebugs decide where to dig based on microclimate (soil texture and temperature are big factors), not on a survey of potential prey availability, and they if they guess wrong, they have to move to a more populated neighborhood. Larvae that make small pits capture small prey (and ignore large prey that wanders in), and doodlebugs that make larger pits accept a greater diversity of prey sizes. Hungry larvae dig smaller pits. 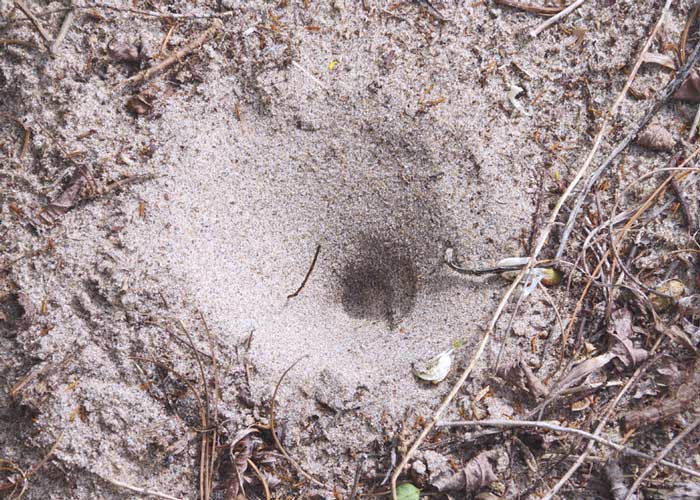 Eggs are laid in sheltered spots and are camouflaged by sand and debris that stick to them because of the tacky substance Mom coats them with. The pupal case also seems to be disguised as a sand heap.

On his Bug Eric blogspot, Eric Eaton says that you can become a doodle bug whisperer!

Folklore states that if you lean over a doodle bug pit and repeat the phrase ‘doodle bug, doodle bug, come into view’, it will spit sand and move. There is some truth in the legend. Doodle bugs respond to vibrations and the human voice can cause just the right amount of vibration to spring an antlion to action.