“Snake spit,” “Cuckoo Spit,” and “Frog spit” are names for these bubbly masses of foam that are seen on grasses, wildflowers, and even in trees. They are manufactured by the nymph (immature form) of a critter called a froghopper or spittlebug, a bug whose immature stage is better known than its adult. Froghoppers, named for their gait and homely appearance, are similar to leafhoppers (of previous BOTW fame). A leafhopper has an orderly row of spines down its hind tibia (BugSpeak for back leg), and a froghopper has a few random, larger spines. A ½” long adult froghopper would be a pretty large froghopper. You can have a close encounter with an adult froghopper by walking into just about any field around here in summer, sitting down, and then checking out the small insect fauna that take up temporary residence on your jeans. 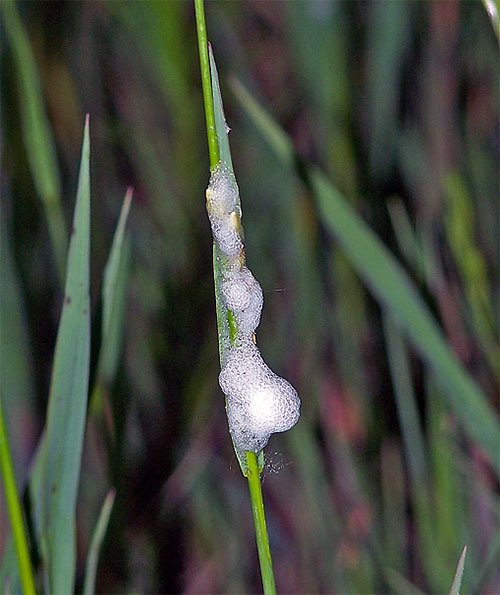 Spittlebugs overwinter as eggs and hatch in spring. The light-colored (usually green), soft-bodied nymphs suck plant juices—lots and lots and lots of plant juices. Many species are picky eaters, favoring particular host plants, and some are considered pests. Standing head down on a plant stem, they insert their sharp beak into the stem and start feeding. As the excess plant juice exits to the rear, it is mixed with a mucilaginous substance produced in two of their final abdominal segments, and air is whipped into this stuff by finger-like appendages located on the tip of the abdomen. The BugLady would like to tell you with a straight face that spittlebugs are in the Family Cappuccinidae, but they aren’t; they’re in Family Cercopidae, in the Order Homoptera. 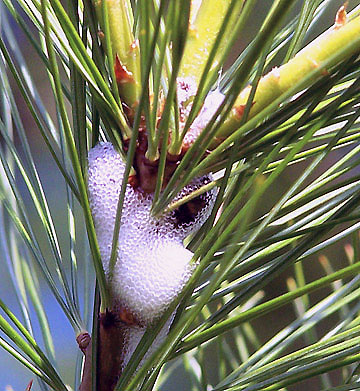 This mixture of ingredients is resilient enough to last for days and to stay intact through heavy rainstorms. One mass of bubbles may hold several nymphs as well as an inquiline, the larva of a Drosophila/Vinegar fly called Drosophila sigmoides. The fly larva gets free food and a roof over its head but contributes nothing to the arrangement. It’s not every day that the BugLady gets to use two of her favorite vocabulary words—inquiline (tenant) and mucilaginous (mucilaginous) in the same episode.

Why expend the energy to produce spit? The bubbles provide humidity that keeps the nymph’s soft body soft, and the mass of spit also helps it breathe. Inside the froth, nymphs are effectively hidden from predators, though several sources say that it is the spit’s bitter taste rather than its appearance that provides the protection (the BugLady assumes that some intrepid scientist has tasted it). Having produced this “super-spit,” you would think the nymphs would stay put, but they don’t. They molt and move several times, creating a fresh home each time they do. Spit-dwellers or not, they are found and parasitized by some tiny wasps.

They continue this routine until they mature into adults. Homopterans do Simple Metamorphosis—the nymphs simply grow more and more like adults with each molt until, after a final molt, they are adults. No cocoon or resting-changing pupal stage for them! Adults are a drab brown/green/gray/sometimes striped. They eat the same food as the nymphs, and they eat it in the same way, but they can no longer produce spit. They can locomote as adults by flying or by leaping. Once outside their foamy shelter, they are eaten by birds and collected by solitary wasps.