This holiday rerun from 2011 was inspired by an amazing flight of spiders that the BugLady witnessed at Horicon Marsh in Central Wisconsin.

It was the kind of day that gives October a good name – 60 degrees, clear, still. As our intrepid band walked out onto the floating boardwalk on the northwest edge of the Marsh, we were struck, both literally and figuratively, by the webs hanging from the posts and ropes that make up the boardwalk’s railing (though we had gotten a preview – we passed road signs that were draped with silk). Soon, we were webbed, too – imagine the sensation of breaking through spider webs, but imagine it out in the open, over water. We noticed that each of the posts was topped by a mixed bag of dozen or so tiny-to-smallish spiders and that silver streaks of web could be seen in the air at all altitudes. It was awesome, by any meaning of the word. 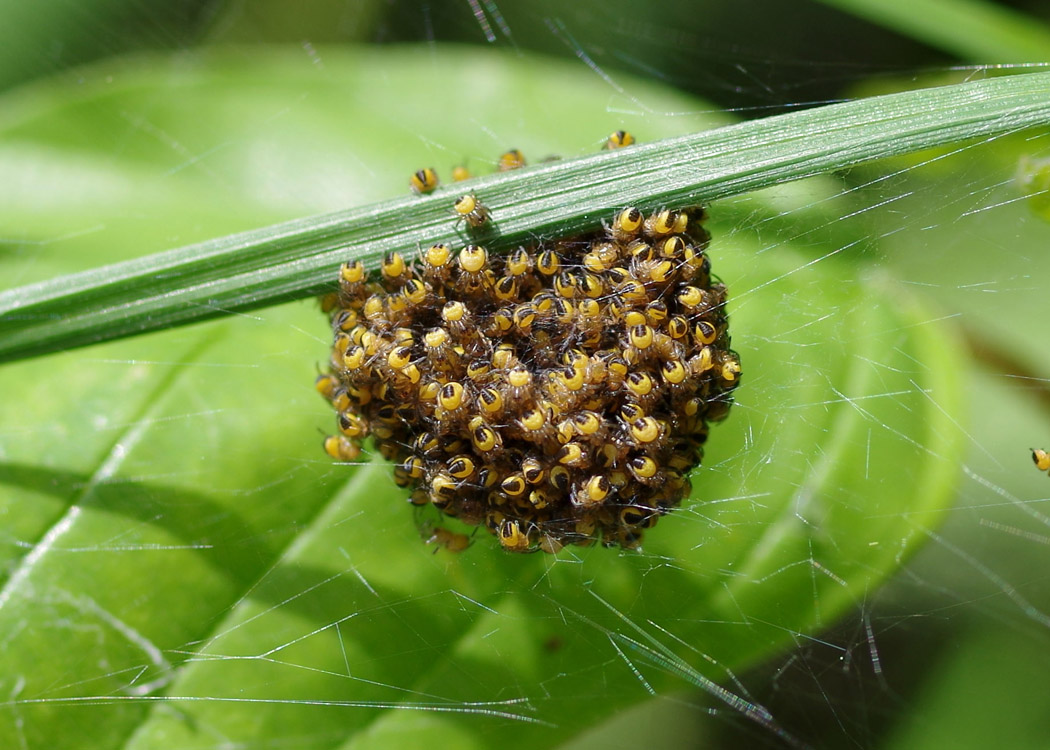 A spider egg mass may hold several hundred eggs, and when it hatches, each spiderling is elbow to elbow with hungry, competitive and often cannibalistic siblings. Best to get out of Dodge, and why walk when you can fly? Most species of spiders have the ability to produce web, and they can deploy a number of different types of web, depending on the occasion. Web, which starts out as a liquid, is released from spinnerets through “spigots” on the abdomen. As the liquid hits the air, it “solidifies” into the familiar silken web. 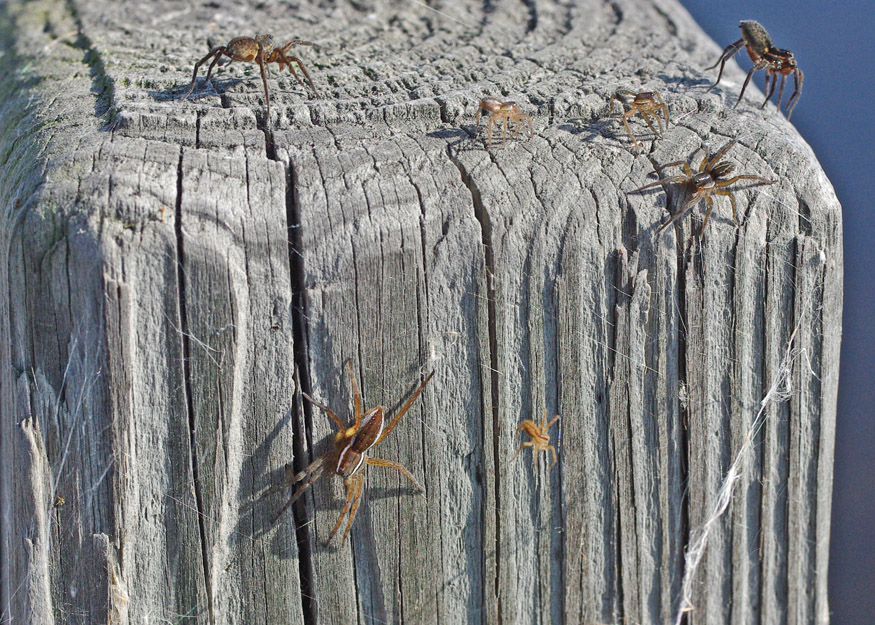 When the weather conditions are right (warm enough for thermal updrafts but not too windy), young spiders and even adult spiders of the smaller species climb to the top of a tall object (a blade of grass is tall to them), face into the wind, stand on their tiptoes, and release one or more fine strands called gossamer. Etymologists please note, “gossamer” is apparently a corruption of the Old English term “goose summer” and refers to the warm days in the fall of the year when (pick your favorite, but not-mutually-exclusive, bit of folk lore): geese were eaten and/or goose down is drifting in the air. Thermal updrafts pick up the line – and the spider – for a trip that may span inches or hundreds of miles. Though scientists call it “dynamic kiting,” the process is popularly known as “ballooning.” Spiders have no control over when or where they land, but if it is a favorable spot, they’re set to mature to adulthood the following summer.

From an on-line site called “Journey North” comes a delightful article called “Plankton in the Sky? – Observing Aerial Plankton.” In it, the author points out that a variety of tiny arthropods “drift through the sky in the same way that plankton drifts in the ocean” (a fact that is well known to bats, dragonflies, nighthawks, swallows, and other animals that feed on the wing). Apparently, a large percentage of these aeroplankton are spiders.

The author goes on to say that

one entomologist, Dr. Gilbert Waldbauer, calculated that during daylight in May, a volume of air one mile square extending from 20 feet above the ground to an altitude of 500 feet contained 32 million arthropods! He wrote that ‘This amounts to 6 arthropods per 10 cubic yards of air. Ten cubic yards is quite a small space, about the size of a small clothes closet.’

Check out the full article (the author suggests that we put a fine net on a tall pole to sample the day-flyers, and that at night we go outside and shine a strong flashlight into the sky and appreciate the specks floating by.) 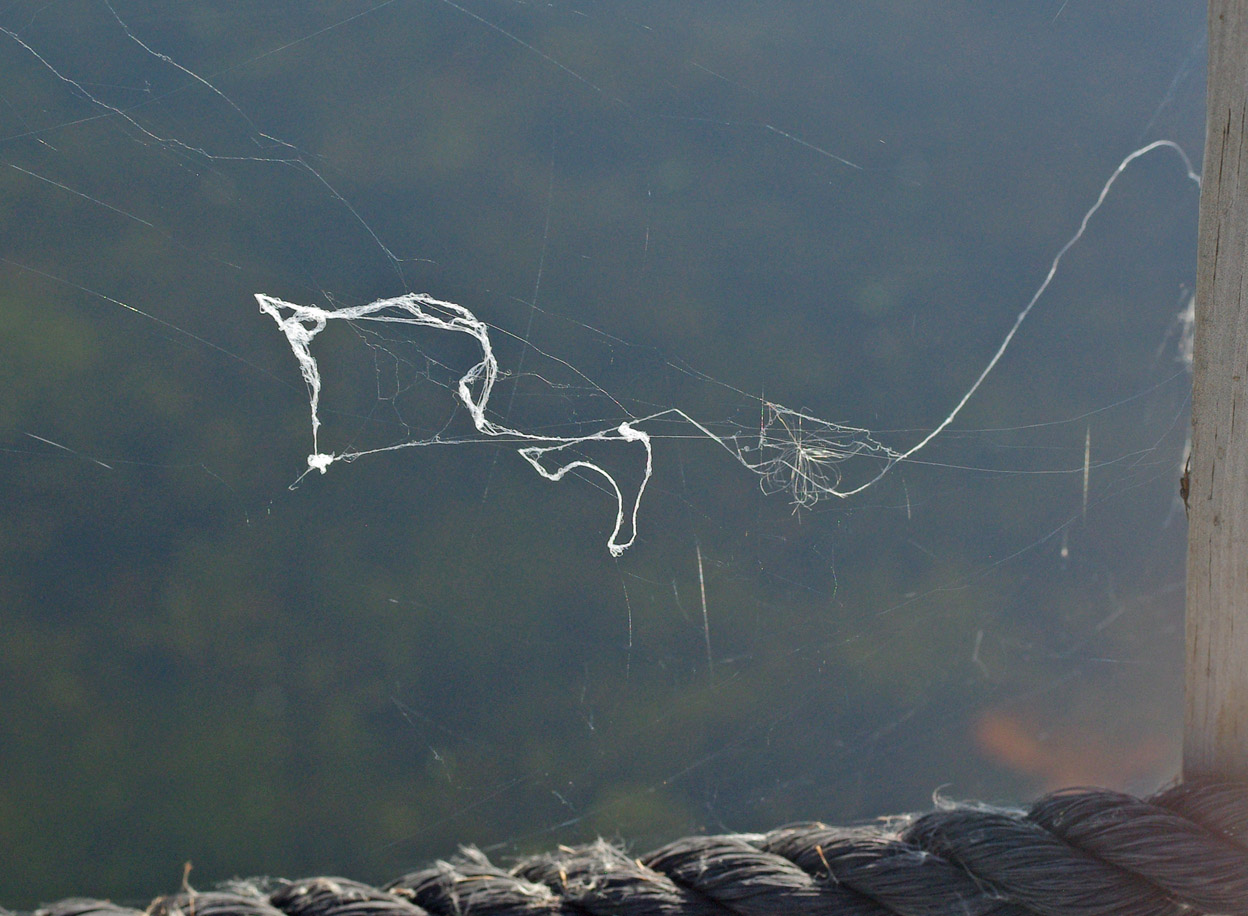 Spider movements are noted by scientists, agriculturalists, and poets alike. Farmers recognize the value of the insect-control services that spiders provide and want to know how to get them back into the fields after harvest. During his cosmos-shaking voyage aboard the Beagle, as he collected evidence verifying the forces of natural selection, Charles Darwin marveled at the spiders that parachuted onto the deck of the ship when it was many miles from shore. Indeed, spiders have been collected by traps on airplane wings at altitudes of 15,000 feet.

Anna Botsford Comstock, in her wonderful Handbook of Nature Study (which was first published by the Cornell University Press as a courtesy because her husband was head of its Entomology Department and is still in print a century later) likens spider ballooning to the way thistle and dandelion seeds disperse. Scientists have studied whether forest spiders use ballooning to disperse as readily as open field species do – wind speeds get knocked down considerably inside forests, and most forest plants do not send their seeds out onto the air currents. They discovered that forest spiders do balloon, though body size may be a limiting factor.

For years, scientists misinterpreted the physics of spider flight by using a flawed model in which the web “balloon” was rigid. More recent experiments testify to the elasticity of the balloon, find no correlation between the length of the gossamer strands and the time or distance traveled, and quantify the ideal amount of convection/stability/cloud cover of the atmosphere relative to body size. In one study, the scientists’ math-ridden conclusion was that they had demonstrated “for the first time that optimal conditions for ballooning distance also explain the observed patterns of spider take-off events” (information that, no disrespect intended, folks, even the smallest spider comes equipped with).

Spider flight is a phenomenon that keeps inspiring study, and information about the conditions that result in the maximum dispersal of spiders will help predict the routes of airborne seeds, pollens and pathogens alike (there’s some weird stuff in the dust that blows over the Atlantic from Africa). BugFans will be happy to hear that spiders infected with Rickettsial bacteria – typhus, Rocky Mountain spotted fever, etc – are fit to balloon but are less likely to balloon. Apparently the bacteria doesn’t like to disperse (“ScienceDaily,” June 18, 2009) (no, people don’t get these diseases from spiders, and the article did not suggest that they are vectors).

Occasionally, movements are large enough to make the newspapers, and a few years ago, some Californians were sure that the silvery material (gossamer) they saw drifting in the air came from UFOs.

For a reality check, read chapter XXII: A Warm Wind in Charlotte’s Web.