The BugLady, who tries not to be a drama queen but who is an unapologetic practitioner of anthropomorphism, offers the following from the University of California-Davis, publication The California Garden Web. It describes Sphecode Bees thus:

… you’re relaxing in a swimming pool and you realize you have company. A knat-sized [sic] insect with a red abdomen lands next to you… Sweat bees are attracted to perspiring skin and often drop into swimming pools where they greet you with a brief but sharp sting… When the larvae hatch, they turn villainous and eat the young of the host bee. They also steal the provisions… Call them cuckoo bees. Call them parasitic bees. Call them clepto-parasitic bees. Whatever you call them, you’ll remember that red abdomen and sharp sting. You’ll see red for just a little while.

Hmmm, let’s demystify that a little. Sphecodes bees, the stars of today’s show, are parasitic solitary bees in the large, but mostly-not-parasitic sweat bee family Halictidae. Sphecodes bees are sometimes called cuckoo bees (CBs), named after the European Cuckoo (bird) whose answer to the question of “Who’s watching the kids?” is “Foster Parents” (American cuckoos don’t do that, but our cowbirds are nest parasites). Non-Sphecodes sweat bees and cuckoo wasps (an altogether different insect) have been featured in previous BOTWs. 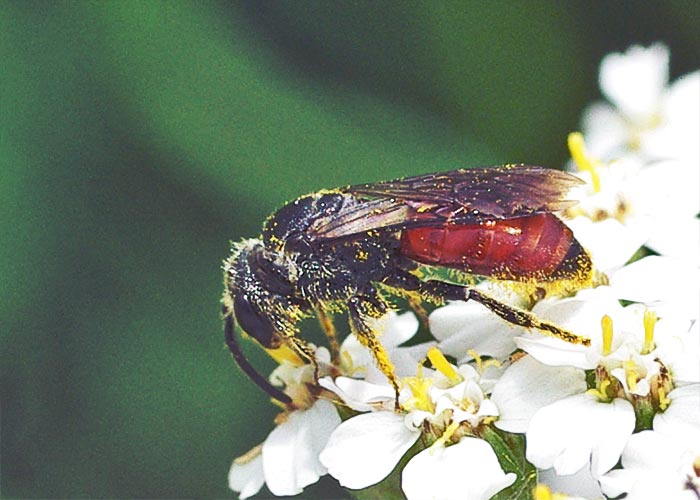 Quick Sweat bee review: Their name stems from the habit of one drab genus (Lasioglossum) of landing on your sweaty skin to lap up the salt. When their salt-source (you) makes a sudden move or tries to swat/brush them off, they may retaliate. Sweat bees (SBs) mostly nest underground. Many species are solitary, but some are semi-colonial and others are semi-social. The offspring of semi-social SBs may stick around and help their mother care for subsequent offspring and the nest. Semi-colonial females are solitary. Although they tolerate other bees nesting in close proximity (they may even share a common entrance to a tunnel system), each female owns her own tunnel. Females excavate tiny chambers/cells in the tunnel walls, pack them with nectar and pollen, insert an egg, close off the cell, and repeat. Their larvae hatch, feed, and pupate within their cells. Adults eat nectar and appreciate goldenrods and other flowers in the Aster family.

SBs are active native pollinators that (like bumblebees) can “buzz pollinate”—they grab the anther of a flower in their mandibles and use their wing muscles to vibrate the flower, dislodging the pollen.

Cuckoo bees are kleptoparasites (which may also be spelled with a “c”). Like their avian namesakes, they deposit their eggs in someone else’s nest—in the case of CBs, in the nests of fellow-Halictids. Some CBs specialize in a single host species; others target the nests of several closely-related SB hosts, species that are similar in appearance and behavior.

Female Cuckoo bees go out on reconnaissance flights to locate SB nest sites, and they may poke around at a nest site for a few days before laying eggs. In a departure from usual behavior of parasitic insects, it is generally the female CB, not her larva, that destroys/eats the eggs or newly-hatched larva of the cell’s rightful owner. She replaces the host’s egg with her own and reseals the cell. CB larvae hatch out and “liberate” the food cache prepared by the female SB, and they may be able to synchronize their larval and pupal stages with those of their hosts. If the intruder runs into the tunnel’s rightful owner during an egg-laying foray, there may be coexistence, or no interaction, or a shoving match, or a stinging fight to the death. 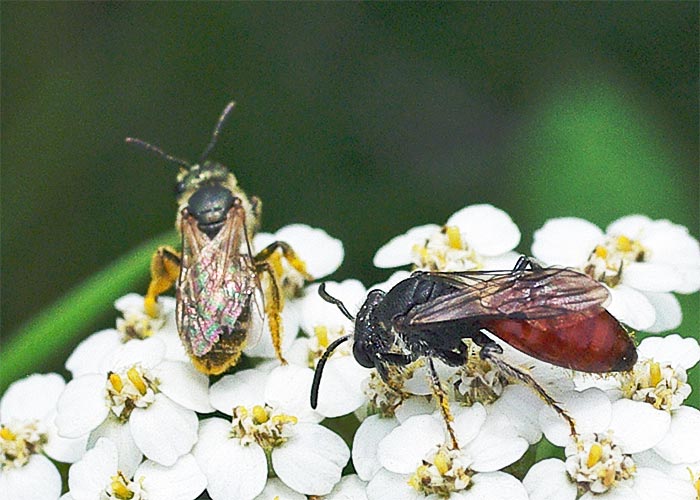 When a CB invades the nest of a social SB (one that includes a queen, eggs, larvae and workers), she may supplant the original queen, or she may continue as an inquiline (boarder) in the nest, substituting her eggs in the cells that the SBs continue to create, provision and tend.

As a group, CBs range from tiny to just over a half-inch long. They have a broad head, and there are grooves in their tough-looking thorax. Males can be mistaken for other Halictids, but the females of most Sphecodes species have varying degrees of red on their (shiny) abdomen. Because Cuckoo bees diverge from the SBs’ usual, pacific lifestyle, they lack some basic SB equipment—digging structures, general hairiness, and the scopa (the hairs on their legs that allow other SBs to collect and carry pollen). Instead, they have heavier spines on their legs that are more suited to invasion than excavation.

Cuckoo bees are more temperate than tropical; there are around 80 species of Sphecodes in North America, and about 300 of the 4,300 species of Halictidae worldwide are CBs. CBs are not in any immediate danger of extinction, but many native pollinators are suffering population declines, and CBs would be threatened if their hosts’ numbers decreased.