The BugLady photographed this pretty, little, spider in the wilds of Ohio in June, and then found more in Wisconsin in August. When BugFan Mike ID’d it for her, he said “I love it because it is one of the few WI spiders I can also see in Panama! It should get more common here with global warming.” 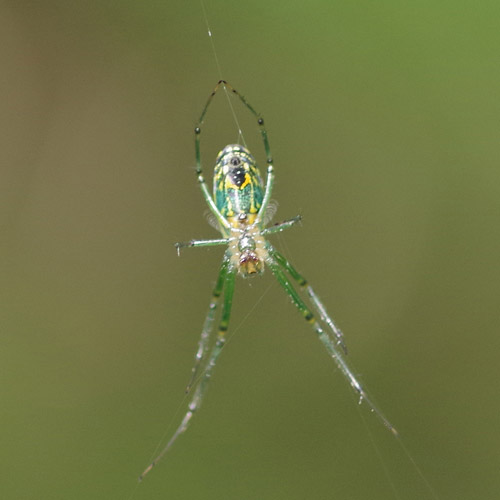 There are a number of spiders that are called “orchard spiders;” this one is officially known as Leucauge venusta (Leucauge comes from the Greek for “with a bright gleam” and venusta is Latin for “beautiful”). It’s in the Long-jawed orbweaver family Tetragnathidae (we have visited the family before in the form of long-jawed orbweavers in the genus Tetragnatha https://uwm.edu/field-station/long-jawed-orbweavers/). There are more than 150 species in the genus Leucauge worldwide, and as a group, they like the tropics.

The genus was named by Charles Darwin, who was also the first to collect one (it’s the only spider that has that double distinction), but then the original specimen was lost. See https://www2.gwu.edu/~magazine/archive/2011_research_fall/feature_pdf/gwr_fall12_feat2.pdf for a nifty article about it (N.B. the BugLady was momentarily confused by the way this article scans, but she figured out that when you get to the second page, read the middle column straight through the green font to the bottom, then read the column to its right. The text under the partial picture on the left stands alone).

Yes, they’re are found in orchards, but you’re equally likely to see their horizontal webs on low vegetation in woodlands (especially dampish woodlands) from southern Canada well into Central and South America. The horizontal orientation helps them to catch jumping as well as flying insects.

Orchard spiders (aka Venusta orchard spiders) are long-legged and small – the bodies of females are a little larger than a third of an inch and males are a little smaller; females have green legs, and males’ legs vary. One source described them as coming in neon colors – their bodies are striped with green and gold and silver and black, and another gave a nod to their photogenic appearance. There are some dynamite pictures of them on the Web, like this very green individual https://bugguide.net/node/view/1152832/bgimage, and https://bugguide.net/node/view/1105893/bgimage, and this male – https://bugguide.net/node/view/954204/bgimage, and this collection from the Maryland Biodiversity project https://www.marylandbiodiversity.com/viewSpecies.php?species=6567&showHidden=1, and, a Scanning Electron Microscope (SEM) shot https://fineartamerica.com/featured/orchard-spider-david-m-phillips.html).

Like males of many other species, the male orchard spider courts carefully, recognizing the lady by her chemistry (odor), and softening her up and assessing her interest by sending specific vibrations to her through her web. Females subsequently attach an orange-ish egg sac (which may hold several hundred eggs) to a nearby twig or place it in a leaf shelter. Adults die by the first frost, and the eggs hatch, but the spiderlings overwinter within the shelter of the sac, disperse by ballooning in the spring, and begin making their own webs. Young spiders make smaller webs, closer to the ground, than their elders.

They are eaten by a variety of mammals like shrews and bats, and by many species of songbirds. Orchard spiders are parasitized by a wasp whose larvae attach themselves to the spider’s exterior and feed on it from the outside (ectoparasites). Scroll down to the “Friends and Foes” section for a picture and a description of the larvae’s modus operandi https://sites.google.com/site/islandecologyuncw2015/impacts-of-terrestrial-fauna/orchard-spider. 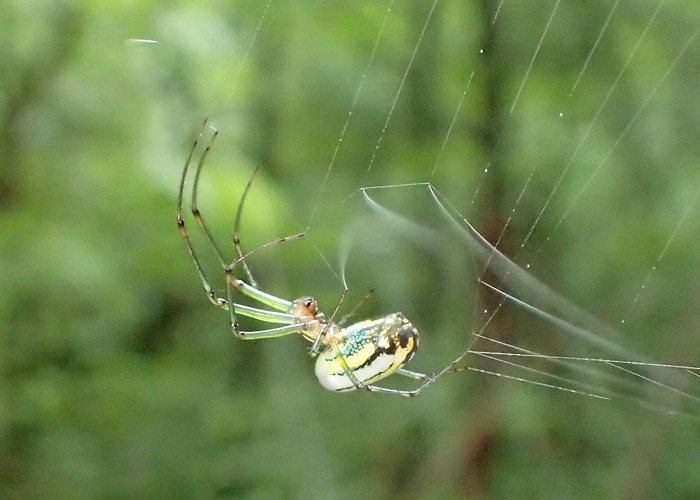 Scientists have analyzed their web-spinning patterns down to the last twist and turn. Adults make a web that is about a foot across, horizontal or slightly tipped, averaging (according to Eric Eaton’s bugeric blog) “30 radii (spokes) and 60 spirals.” He goes on to say, “The orchard orbweaver is shy, and drops from its web straight to the ground if it feels threatened, often disappearing into the leaf litter and undergrowth.” Spiders are often found suspended, belly up, from the center of the web.

Interesting spider fact: according to the University of North Carolina’s Barrier Island Ecology project, not only are spiders in general important biological controls on pest insects (although, alas, to a spider, beneficial insects taste as good as the unwanted ones), but mixing spider venom with a kind of plant protein produces a natural pesticide that is bee-friendly!