This is the second of an occasional series begun last week with house spiders, and (belatedly) titled “Speed-dating the Spiders” (sorry, BugFan Mary). Once again, the BugLady would like to thank BugFan Mike, who looks at the BugLady’s out-of-focus spider pictures and identifies them (to the extent that they can be), and tells her about them. Remember the old saying “Your guess is as good as mine?” Well, in the case of spiders, BugFan Mike’s guess is a highly educated one that is way better than the BugLady’s. 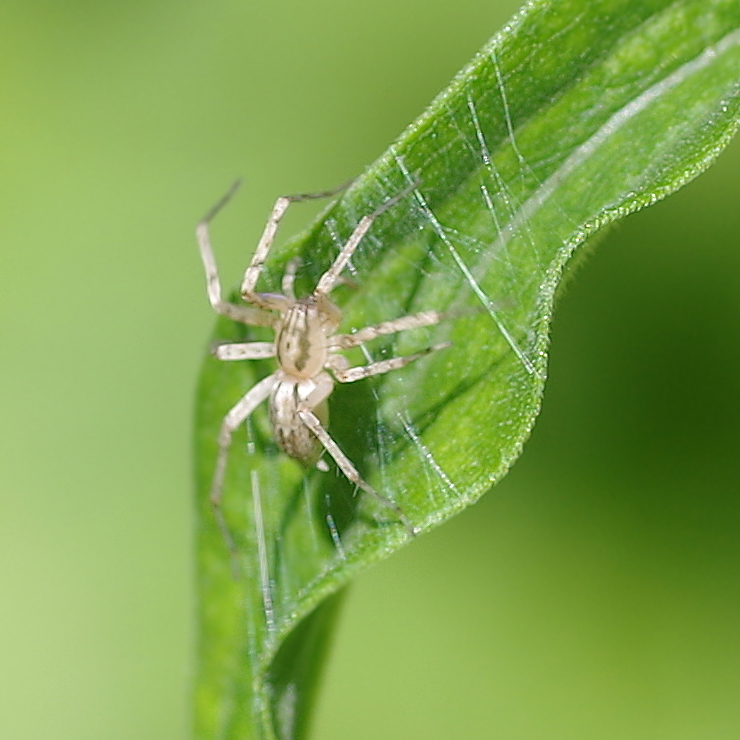 Ghost spiders, family Anyphaenidae, get their name from their generally pale appearance and the fact that they are (mostly) nocturnal. There are about 500 species of ghost spiders globally, with only a single species in northwestern Europe, and 37 in North America (10 of those in Wisconsin). Look for them on living or dead vegetation or on rock piles, or under loose bark in winter. Today’s spiders are in the genus Anyphaena, and you have to get up-close-and-personal to ID them to species.

They range from smallish (a half-inch) to very small. Some species (the grassland dwellers) have long legs, and others (the leaf litter dwellers) have short legs. Their legs are tipped with distinctive clusters of hairs on the bottom of each “foot” (“claw tufts”); these increase traction and allow them to be good climbers. Most spiders have eight eyes, and a ghost spider’s are arranged like a smiley face.

Like crab spiders and jumping spiders and some others, ghost spiders are active hunters that don’t build a trap net. They do spin silk “retreats” in sheltered spots, and their egg sacs are made of silk. Males vibrate their abdomens really fast during courtship (the European ghost spider is called the “buzzing spider” because of the small noise made by the male’s abdomen as it vibrates against vegetation). Mom sticks around and guards the egg sac until the spiderlings hatch. 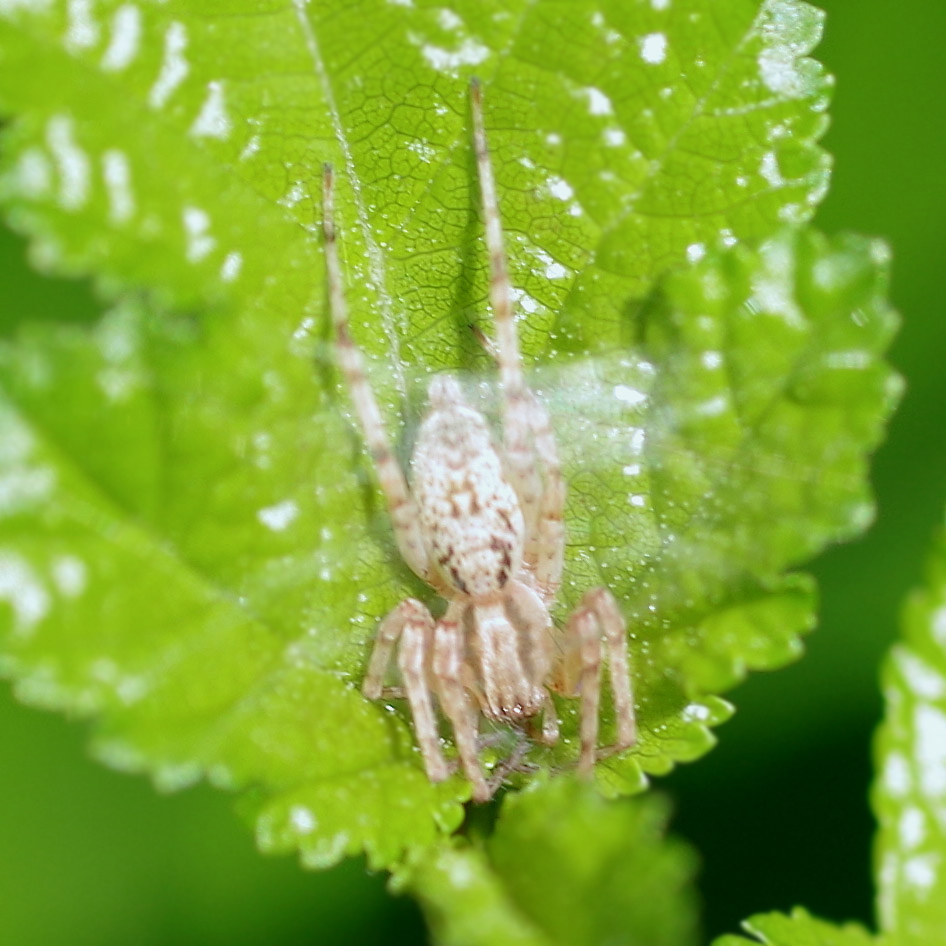 They prey on small insects and are considered to be good controls of agricultural/orchard pests, and some species even add insect eggs to their menu. This is a very active spider that doesn’t indulge in a lot of “down time,” and it needs energy to sustain it while hunting. What’s a spider to do? It turns out that some species of ghost spiders are among the spiders known to feed on nectar from flowers or from extra-floral nectaries. Some spiders eat sap, honeydew from aphids, pollen, spores, or even fruit (they bite the fruit, inject a tenderizer and wait a bit, just like they do when they catch an insect). This habit mostly exists in warmer climes and does not totally replace meat-eating.

Ghost spiders figured in a study of the occurrence of spiders in urban areas. Researchers Meinke, Holmquist, Wimp and Frank looked at the invertebrates that live in urban trees. It was known that populations of plant-eating insects increase with the temperature, but the effect of warmer weather on their predators was not known. The researchers observed that ghost spiders don’t like it hot. Or dry. Seasonal rises in temperature, exacerbated by the urban heat island phenomenon, are hard on them, and they may escape by ballooning, leaving the trees to the leaf-eaters, and recolonizing when temperatures cooled. The authors suggest that global climate change could eradicate heat-sensitive organisms from cities and bring about boom populations of tiny grazers.

They’re baaacccckkkkk – Raise your hand if the outside of your house is decorated with box elder bugs. For more information, see the Bug of the Week article “Box Elder Bug Revisited.”

Bugs in the News – The Videos