Lots of regional names for these guys: sowbug (Midwest U.S.) (a name often reserved for species whose carapace “flares out” slightly at the edge), pillbug (a name often reserved for the “flare-less” species that can roll up into a “pill.”) (Great Lakes region and northeast U.S.), potato bug (Great Lakes and Intermountain West), roly-poly (most common to the southeast U.S.) and wood louse (scientists). The edge of a Pillbug’s exoskeleton tucks under a bit, and the edge of a sowbug’s exoskeleton is very slightly up-swept.

The crater-like background for the first shot is the plaster wall directly in back of the BugLady’s computer. It was taken in the third week of February. The BugLady did not ask whence it came or was going and doesn’t really want to know; there’s plenty of sowbug food here, and welcome to it. 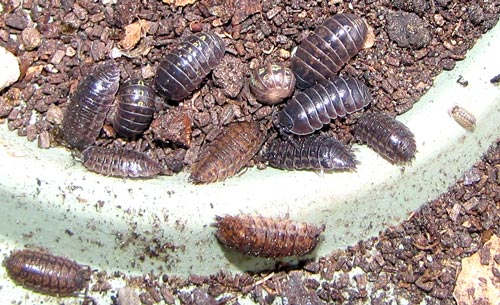 These “bugs” are not insects (class Insecta) but are in the order Isopoda (equal legs—class Crustacea), distantly related to lobsters, shrimps, crayfish and crabs. They like the dark and damp and are found under leaves, logs, flowerpots, etc. They breathe through gill-like organs that have to be kept damp (90% humidity), and they can sense when the humidity is too low and will seek out spots that are damper.

The young hatch from eggs carried by the female in a brood sac. They hatch looking like pale “mini-me’s” and simply grow instead of metamorphosing (yes, an actual word!). They have 6 pairs of legs until the first time they molt, when they get a 7th pair. They are odd in that they molt in stages, so if you find a two-toned sowbug, it’s because the skin on its anterior (front) half is new, but the skin on its posterior is older. After molting, it tries to puff its soft skin up some so that when its armor hardens, there will be a little more room inside.

Sowbugs are scavengers, eating organic matter—plant or animal—indiscriminately. They turn larger pieces of plants into small ones, thus providing food for much smaller organisms. Some do eat young plants and so are considered pests. Some are considered pests because people get startled when they turn over a flowerpot and eighty-gazillion sowbugs/pillbugs scatter like so many vampires avoiding the sun (but, as the Bug Lady can testify, the true champs for “Creepy-ness Factor” are the herds of earwigs that inhabit her mailbox or that drop out of the touch pad of the garage door opener). 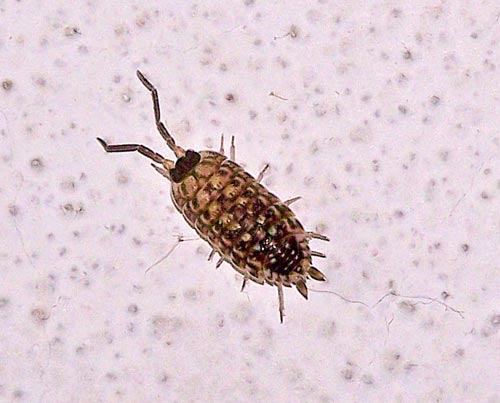 Pillbugs can roll up in a defensive ball, like a mini armadillo. When they roll up and tuck in their legs and antennae, their armored dorsal shells protect their proverbial soft underbellies. Plus, many species can resort to chemical warfare by producing a noxious substance in glands along the sides of their bodies—Despite their defenses, pill bugs are eaten by spiders and birds. 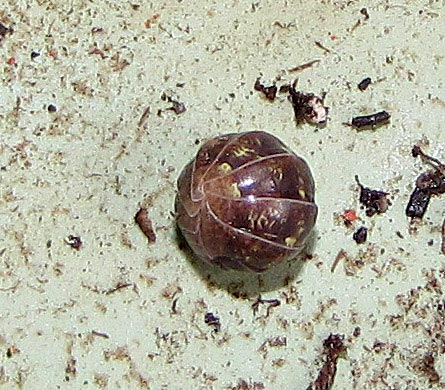 The Bug Lady heard a cautionary tale about a sowbug and a naturalist (who might have been showing off just a wee bit with a class). He ate a sowbug, to demonstrate…something…The sowbug spent the next four hours—despite subsequent consumption of water, bread and other edibles (by the naturalist), trying to climb up his esophagus. Stronger than stomach acid!

Check out Life in a Bucket of Soil by Alvin and Virginia Silverstein.