Ugh—is a slug a bug? According to Alvin and Virginia Silverstein in their excellent kid’s book, Life in a Bucket of Soil, a slug is a “slime glider,” which sounds much more high-class, except for the slime part.

Slugs, and their crunchier cousins, the land snails, are Mollusks, soft-bodied animals whose mantle secretes a limy shell. They’re in the same class Gastropoda (belly foot)—as seashells like the limpets, Moon shells, whelks and conchs. Slugs look like a snail without a shell, although the shell is often there, reduced to a small, thin plate. The absence of a big shell allows slugs to squeeze through teeny openings. Some alien slugs have hitch-hiked to the Colonies via root balls and other agricultural conveyances. 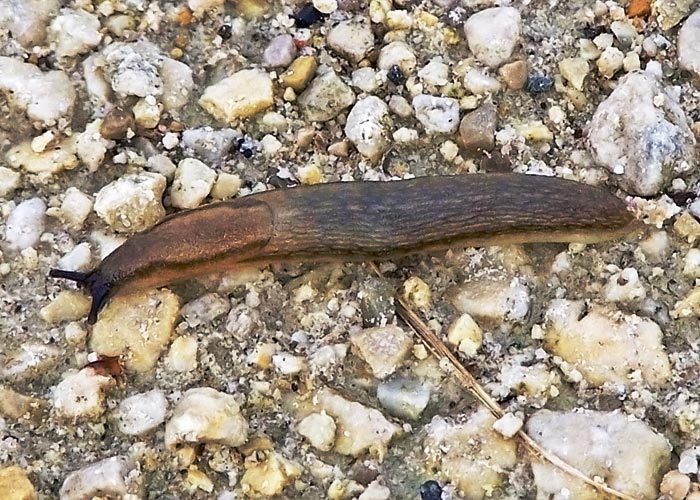 By global standards, Wisconsin slugs are small and drab. The Bug Lady’s #1 child tented in Wales one summer and has many Slug Tales to tell. Her advice? If you ever tent in Wales, be sure to zip the tent up really tight; if you need a trip to the “Loo” in the wee hours, watch where you walk and wear shoes; if you lie down in the grass to look at the stars you might not be alone when you get up; and not all that drops from above is rain.

Slugs tend to be nocturnal, finding their food by smell. They have two pairs of feelers, with eyes located on the tips of the longer pair. If you poke them in the eye, they can retract the eyestalk instantly—literally turn it inside out—to protect it, and they can regenerate eyestalks. Their body is called a “foot.” The slime they produce with glands in the foot smoothes all terrains, and they are said to be able to glide over the sharp edge of a razor. Land slugs breathe air with lungs. They eat living or dead vegetation, sanding off small pieces of tissue with their “toothed,” rasping tongue (radula). CSI fans please note—each species of snail and slug has a characteristic arrangement of teeth and can be identified by the “dental pattern” it leaves on the plants it rasps.

Some slugs are carnivores, and the Silverstein book contains a dramatic account of a species that squeezes into earthworm tunnels. When it encounters an earthworm, the slug latches on like a bulldog to whatever end is closest. The slug contracts, pulling on the worm. The worm contracts, pulling on the slug, which may get dragged through the burrow by the fleeing earthworm. Nature red in tooth and claw—right below your feet! Slugs, in turn, are eaten by a variety of small animals.

They are hermaphroditic, housing both genders in the same cute little body. After mating, he/she lays a hundreds of eggs in the damp soil. The hatching of the eggs and their subsequent development depends on the time of year the eggs are laid. Gardeners have a bone to pick with slugs (which have none), especially in damp weather, because slugs eat and/or visually damage a wide variety of garden plants. A common slug-control method is to sit in the garden and have a beer and offer one to the slugs. They crawl into dishes of beer and die happy.

Slainte, (which, in Gaelic, means “Bottoms up, little slugs”)