The BugLady noticed something odd about the leaf of a nearby white oak in late summer, so she carefully turned it over and discovered a small herd of shiny, yellow bowling-pin-shaped larvae devouring the bottom layer of the leaf—except for the veins. A week later they were a bit larger (they max out at about ½”), and they had developed startling black “eye-spots” on their heads (the wide end) which made them look like Snoopy’s “Joe Cool” character wearing shades. 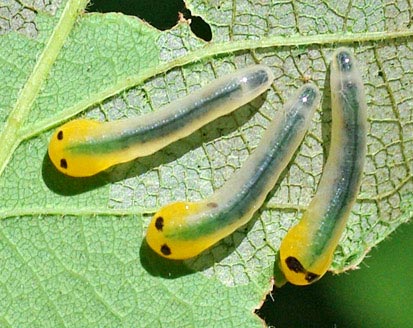 The BugLady got help on the ID (thanks, Gretchen, and for the two BIG books) and found out that these cool little guys are the larvae of the Scarlet Oak Sawfly (Caliroa quercuscoccinae; Quercus is the genus of oaks). Sawflies are primitive (non-stinging) members of the wasp family, sometimes called “plant wasps.” Adults of some species look wasp-like; others are described as resembling flies, and their offspring look decidedly like caterpillars (but with more abdonemal prolegs). Alternate names like “slug sawfly” and “oak slug sawfly” testify to the appearance of the 15 or so species of Caliroa larvae and to the self-generated coat of slime that keeps them from falling off of their perches on the undersides of leaves. Unlike real slugs, they do have bodily segments and they do have a few pairs of legs on their thoracic segments. The internal green line from stem to stern is plant material going through their gut.

Despite its name, the Scarlet Oak Sawfly (SOS) makes filigree of the leaves of red, black, pin and white oaks alike. Adults emerge from underground cocoons when the oak leaves mature in late spring. Ms. SOS slits the upper leaf surface with her ovipositor and inserts a row of eggs along a large leaf vein. The eggs take a few weeks to hatch (although the eggs are inserted into the leaf’s top side, the larvae exit through the bottom leaf surface), and the artwork of the larvae usually isn’t immediately noticeable. This eating style has traditionally been called “skeletonizing,” but Coulson and Witter in Forest Entomology point out that “window feeding” is a better term because the larvae restrict their eating to the undersurface of the leaf, leaving the top surface to dry into a translucent brown tissue that light can penetrate. After feeding for a month or so, the larvae bail, burrow into the soil, and pupate. Sawflies in warmer climes may emerge the same summer and produce a second, and even a third generation. 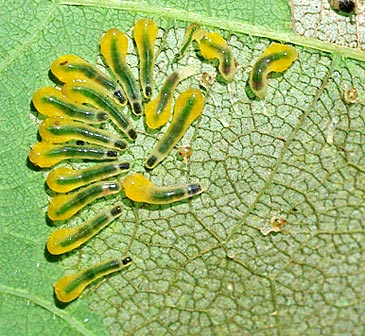 Google “leaf skeletonizer” and you’ll get tons of hits about the behavior and control of specific skeletonizers like grape leaf, palm leaf, oak leaf, eucalyptus, etc, skeletonizers, many of whom are considered agricultural and forest pests. It’s much harder finding general information about the skeletonizer lifestyle. Skeletonizers are considered defoliators, often lumped with leaf miners, tent-makers, the folders, rollers, webbers and tie-ers of leaves, and generalized gnawers. Defoliator populations are often cyclical/periodic, and plants mount some complex defenses against them. The damage done is usually temporary (albeit alarming); healthy trees can sprout new leaves. Lots of chemicals are thrown at defoliators, but that pesticide load can adversely affect both non-target species and larva-eating predators.

Sawflies and moths make up a large percentage of skeletonizers (Japanese beetles and some species of leaf beetles are also guilty). Leaf veins are tough! Some insects are skeletonizers in their earliest instars (an instar is the feeding stage in between molts); they start out on just one tender leaf layer but may graduate as they grow to all the tissue between the veins, then everything but the big veins, and then whole leaves or leaf edges.

A few more gratuitous sawfly larvae, while we’re at it:

The gray-with-yellow-spots Willow Sawfly larvae (Nematus ventralis) start out eating the lower leaf surface but then move on to leaf edges. They forage conspicuously in the open, suggesting that they are distasteful (except maybe to Mama Wasp, who stopped for a protein shake).

The (probably) Bristly Rose Slug (Cladius difformis) is found on rose, raspberry, strawberry and some other members of the rose family. After eating the lower surface, they chew big holes in the leaf but leave its veins. They live here, but they’re probably not native to North America. 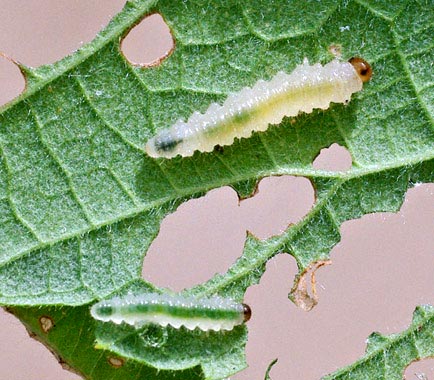 Another Willow Sawfly (Nematus calais, here doing a pretty thorough job on a poplar) is green with black speckles and larger yellow spots along the side. Plants like willows, which are very bitter, make chemicals to deter grazers, but the BugLady found a study that showed that N. calais thrives when it consumes willow. Back to the drawing board… 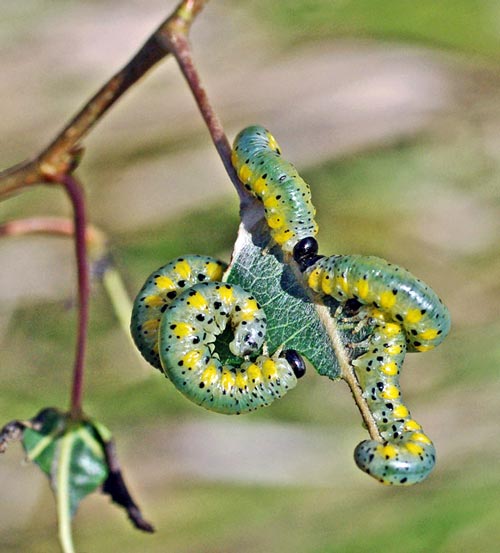 While she was searching for information on skeletonizers, the BugLady found several sites …

… instructing us on how to be skeletonizers, and she offers them to BugFans for what they’re worth. BugFan Mike thinks that the ingredients in the “phantomleaves” site might be a bit hard to come by—chlorate of soda is in the “handle with care” category, and BugFans might have to synthesize the chlorate of lime in their own home laboratories. But, some of the artistic creations in the “Stereoviews” section are amazing! 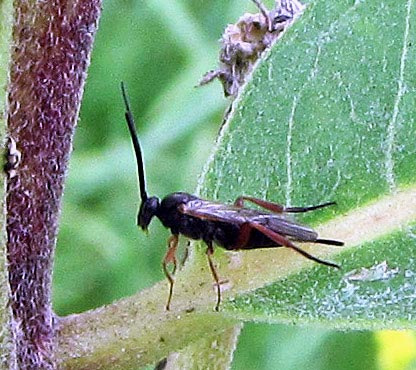 Last week’s weevil episode, BugFan Mike sent this link to a short video of an acorn weevil that is, indeed, chewing a hole with her mandibles and then turning around and laying an egg in it. She has lovely eyes.