Towards the end of June, the BugLady photographed this lovely little moth on her front porch. She took a quick peek in the moth book – nada – and relegated it to the “X-Files.” About six weeks later, she photographed an unusual caterpillar at Riveredge Nature Center and ID’d it, and in searching for the story of the second, found the identity of the first. Love this job!

Slug moths belong in the family Limacodidae (“snail/slug form”); the larvae are called slug caterpillars, and the adults are called slug caterpillar moths. A number of species occur here in God’s Country (the BugLady wrote briefly in 2012 about the monkey slug/hag moth, whose shed larval skin she photographed locally), but they are a group that she associates with the South. Her first experience with them involved driving a camp counselor to the ER in Florida after a related puss caterpillar, our most venomous caterpillar, (different family, same super family), dropped out of a tree onto her. 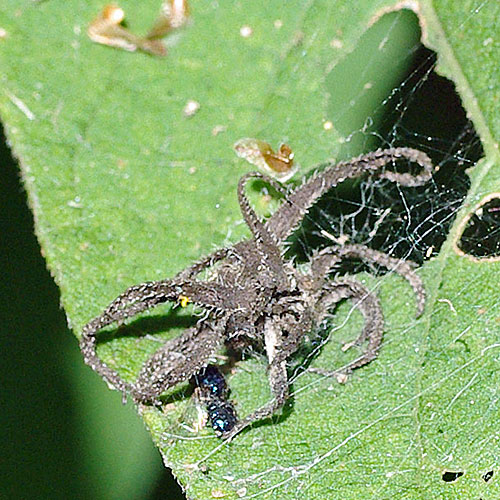 The shed larval skin of a Monkey Slug Caterpillar

According to An Annotated List of Lepidoptera of Alberta (2010), “The family is in need of revision, as no taxonomic works have been published since the original descriptions of species, most of which appeared more than 100 years ago”. Recent publications focus on public health issues associated with some caterpillars’ ability to sting.

There are about 50 species of slug caterpillars/moths in North America (1,700 worldwide, mostly tropical, 125 or so in Costa Rica alone). Adults typically sit with their wings angled out like a tent, and some species curve their abdomens up. In the words of Jim Sogaard, in Moths & Caterpillars of the North Woods, “The celebrities of this family are the caterpillars, a weird and wild menagerie of colors, shapes, patterns, textures and venoms….” Like these (through the saddleback moth pictures). The stocky, sometimes-spiny larvae turn into stocky, extra-hairy adults that do not eat – here’s a collection of pictures of adults (except for the last few species).

The eggs are so transparent that you can watch a larva develop inside. Dyer, in The Life Histories of New York Slug Caterpillars (Conclusion) (1899) says “The appearance of the eggs is that of shining elliptical spots of moisture, rather than that of any ordinary lepidopterous egg.” They are laid on the undersurface of leaves, and that’s where the caterpillars start eating.

The caterpillars are generalist feeders (most species have at least eight host plants) that skeletonize leaves from below in their early stages and attack the whole leaf when they’re larger. Last-stage larvae spend the winter in a state of diapause (suspended animation) in a silken cocoon that has been solidified by the secretion of calcium oxalate crystals; caterpillar species with toxic spines may incorporate some into the cocoon for added protection. They form a pupa within the cocoon in spring. Another common name for the family – cup moths – refers to the shape of the cocoon.

The spiny species of slug caterpillars are not spiny right out of the box. In a paper called “Natural History of Limacodid Moths (Zygaenoidea) in the Environs of Washington, D.C.”(2010) authors Murphy, Lill and Epstein tell us that the spines don’t make an appearance until the second instar (after the larva sheds once) and postulate that this may be an adaptation that allows the extra-thin eggshell to stay intact.

The caterpillar’s head is recessed into its thorax – a slit “under its chin” allows it to feed. “Slug” refers to the way the caterpillars locomote. “Main-stream” caterpillars have three sets of true legs under the thorax; the rest are prolegs that support the long abdomen and are mostly powered hydraulically, rather than by muscles. Slug caterpillars have suckers instead of prolegs, so they undulate or glide across the leaf on a “semi-fluid silk ribbon.” For this reason, they prefer food plants with smooth, rather than hairy, leaves.

About raising slug moths in captivity, Dyer tells us that “In raising any numbers of one species it will be found useful to place them on the growing tree, covered with a large bag of cheesecloth. This method is often attended with great loss from the accidental inclusion of parasites, especially the predaceous Hemiptera, which as eggs easily escape observation.”

Part One – the Moth

The Early Button Slug Moth (pictured above), aka the Warm-chevroned Moth (Tortricidia testacea) is a posterchild for the perils of using pictures of pinned specimens to ID a moth that has a unique posture. The BugLady has never seen its half-inch long caterpillar (scroll down) but will start looking for them under the leaves of (especially) basswood, cherry, maple and oak, but also beech, birch, hickory, and witch hazel.

Wagner (Caterpillars of Eastern North America) describes its range as “woodlands and forests from Pacific Coast to Maine south to Georgia (in mountains) and Mississippi.”

Females lay eggs singly rather than in clusters, and there is one generation per year.

At first, the BugLady thought she was looking at the caterpillar of a hairstreak or azure butterfly, but it turned out to be that of a Yellow-shouldered Slug Moth (Lithacodes fasciola), aka the Ochre-winged Hag Moth. 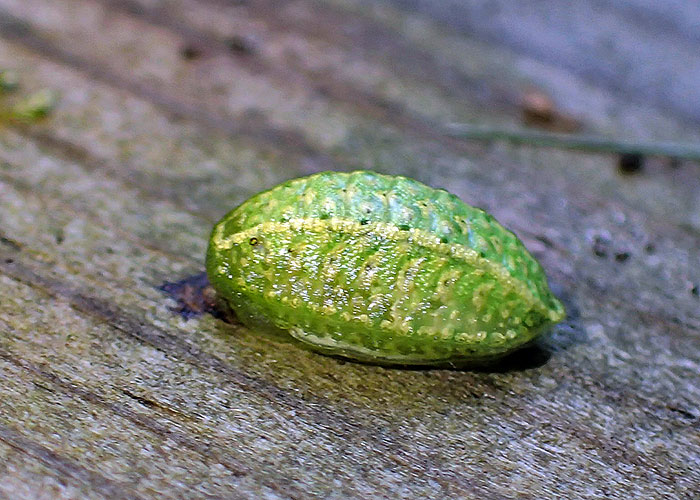 Maps show their range as eastern North America, mostly east of the Great Plains, but according to Dyer, YSSMs range into South America. They are found in woodlands and forests, where they eat apple, beech, blueberry, hickory, hop hornbeam, maple, oak, willow, and more.

Wagner reports that in one study, two-thirds of the YSSM caterpillars he collected turned out to be occupied by parasitoids – the larvae of a tachinid fly. They are also troubled by braconid wasps and stinkbugs.

There is one generation in the North and two in the South.