Thanksgiving looms, and the BugLady would like to give thanks for Slaty Skimmers.

Dragonflies come in all sizes and colors—inch-long, orange amberwings; the slim, red presence of meadowhawks; skimmers and pennants with spotted wings; multi-colored, super-sized darners. The BugLady appreciates flashy dragonflies, but her heart belongs to the elegant Slaty Skimmer.

Slaty Skimmers (Libellula incesta) are in the skimmer family Libellulidae, home of the most common and brightly-colored pond dragonflies. Members of the genus Libellula (along with, in some books, the corporals and whitetails) are known as the “King Skimmers,” which Dennis Paulson describes as “some of the most familiar dragonflies to the general naturalist, as they are large and conspicuous, often with distinctive wing patterns” (and he adds the tasty tidbit that the king skimmers typically” perch with the front pair of legs folded behind the head,” which makes the BugLady want to go back and check all of her photos). The King skimmers are sexually dimorphic, with males generally more colorful than females (juvenile Slatys are striking, but females fade to a grayish-brown). They often perch on the top of vegetation in the sunshine, and they hunt from their perch.

Hagen [the 19th century German-born entomologist/Harvard professor who named them] applied many strange and often undecipherable names to odonate species. For example, Sympetrum corruptum (corrupted), Sympetrum illotum (dirty), Dromogomphus spoliatus (plundered), Brechmorhoga mendax (lying, deceiving), Enallagma praevarum (unsteady), Enallagma ebrium (drunken). Sid Dunkle and I, in our checklist of North American odonates, tried to figure out the origin of these names but failed in many cases. For Libellula incesta, we wrote ‘incestuous, perhaps alluding to looking like a hybrid between other closely related species,’ but this was pure speculation. Hagen never explained the etymology of any of his names, and they will remain unexplained.

They are a Species of Special Concern in Wisconsin, which means they’re a species that we’re keeping an eye on because they occur in small numbers and/or have a very limited distribution in the state. The purpose of the designation is to raise awareness of a species before it reaches a critical level that would cause it to be listed as endangered or threatened. The Slaty Skimmer is both low in numbers and limited in distribution, but not because of a dwindling population or habitat destruction; it is scarce because it’s just moving in, spreading northwest from its range from the eastern/southeastern U.S. Check out the Wisconsin Odonata Survey for information on the range and status of Wisconsin dragonflies and damselflies.

Slaty Skimmers are one of three dragonflies in Wisconsin that are closely-related, very similar-looking, and very rare (in this state, anyway). The slightly smaller Spangled Skimmer (Libellula cyanea), so-called because it has black and white stigmas (pigmented spots toward the wing tips), also seems to be extending its range into the state from the east. The slightly larger Great Blue Skimmer (Libellula vibrans), on the other hand, is fading from this part of its historical range but is secure east of Wisconsin. With its teal-colored eyes and paler blue color, the Great Blue Skimmer could easily be mistaken for a male Eastern Pondhawk (Erythemis simplicicoll) is, also pictured in this episode (the “Slaty Skimmer” shown at the insectidentification.org website is, in fact, an Eastern Pondhawk—some of their other info is also bogus, and their description of the naiad concludes with “They look like insects themselves in this life stage.” Caveat emptor). Male Pondhawks have green eyes and faces, and their thorax may be blue or greenish, but they have white cerci (which makes the BugLady want to go back and check all of her photos). Females and juveniles of the three skimmers can be tough to tell apart, and the BugLady included here a picture of a juvenile skimmer that she was hoping to make into a Great blue Skimmer, because of its more-extensive black wing tips and lighter face, but female Slatys can be variable. 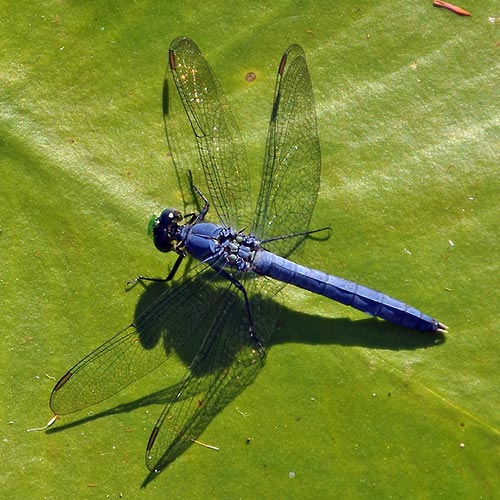 Males are territorial and hostile, defending stretches of shoreline, and an approach by an intruding male results in aggressive displays, loop-the-loops, and chases. They are most active in the morning.

Researchers Wade Worthen and Christina Phillips studied their interactions with other dragonflies, deploying zip lines at different heights over a pond and reeling dead dragonfly decoys of four species of varying sizes over the water. Their initial hypothesis—that Slaty Skimmers would investigate smaller species that appeared higher over the pond—proved false. Slaty Skimmers were more interested in decoys that “flew” lower and that more closely resembled the Slatys themselves.

Females are rarely seen at the water’s edge unless they’re in the mood, and they may breed while still in their juvenile coloration (as a general rule, a higher percentage of dragonflies within 50 yards of the shore are males, and a higher percentage of dragonflies 100+ yards away from the water’s edge are females and immatures). Mating is a brief affair that starts in the air and continues on a perch (credit to BugFan Freda for her shot of the happy couple). A female may lay a few thousand eggs, tapping them from the tip of her abdomen onto the water’s surface (splashing a lot in the process) or throwing them into vegetation. She is guarded from the air (but is not physically gripped) by the male as she oviposits. Female Slaty, Great Blue, and Spangled Skimmers routinely toss eggs onto damp, muddy shorelines along with some droplets of water.

Slaty Skimmers are found around wooded ponds, marshes, lakes, and very slow-moving streams with muddy bottoms, and their naiads are benthic (they live in the muck) and can tolerate low levels of pollution. They are not known to be migratory, but the Great Blue Skimmer is somewhat migratory along the Atlantic Coast.

FYI, entomophagists, Slaty Skimmers have been known to carry liver flukes that they pick up as naiads.

For BugFans who don’t mind a bit of blood and gore, great pictures of dragonflies as prey (including some very desirable species) can be found at the site Dragonfly Predators.