In their Field Guide to Insects of North America, Eaton and Kaufman state that the Skimmers (family Libellulidae) are “the quintessential dragonflies—flashy denizens of ponds and meadows on summer afternoons.” Skimmers make up the largest family of dragonflies, with more than 100 species in North America. Many come with arresting colors and/or patterns on both wings and body. Their flight is rapid and eccentric, and they may brake and hover. They practice sexual dimorphism (settle down—that just means that there are size/color differences between males and females). Libellulid naiads—active, fast-growing, short-and-wide, hooked-and-spined—prefer shallower, warmer water than do the naiads of other dragonfly families. Like all dragonflies, both the adults and naiads are unapologetic carnivores. Today’s trio—the Four-spotted skimmer, the Blue dasher, and the Slaty skimmer, show some of the diversity of the skimmers. 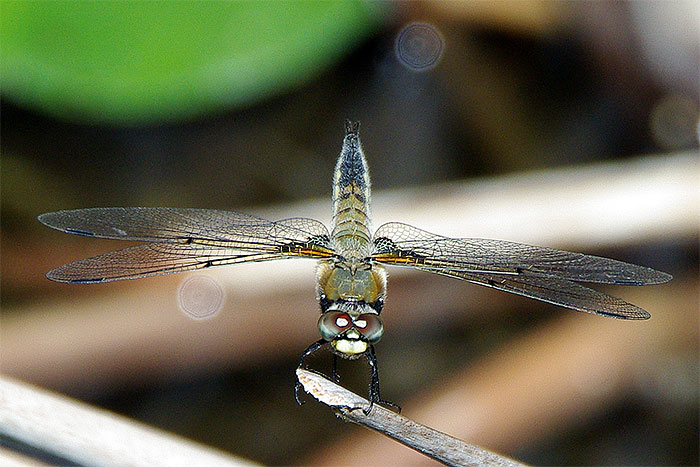 Sources agree that whoever named the Four-spotted Skimmer (FSS) (Libellula quadrimaculata) missed two spots and it should really be named the 6-spotted skimmer (there’s also an 8-spotted and a 12-spotted skimmer). The FSS’s range is circumpolar, including the Orient and Europe. It is known in other corners of the world as the four-spotted chaser, and it is the State Insect of Alaska. This lovely 1 ¾” dragonfly of marshy lakes, fens, ponds and slow streams is an aggressive hunter. FSSs sit on a perch (they have “favorite” perches that they frequent), watching with tilted heads for flying insects to eat and for rival males to chase away. FSSs consume the usual small, pesky, flying insects (mosquitoes, gnats, midges) that are the meat and potatoes for dragonflies, and according to Dragonflies through Binoculars, they also prey on other dragonflies. They fly over open water, often in swarms, and have a flight period that lasts from late spring to early fall. In Europe, FSSs are known to migrate cyclically, every decade or so, a migration that may be driven by parasites in the dragonflies. 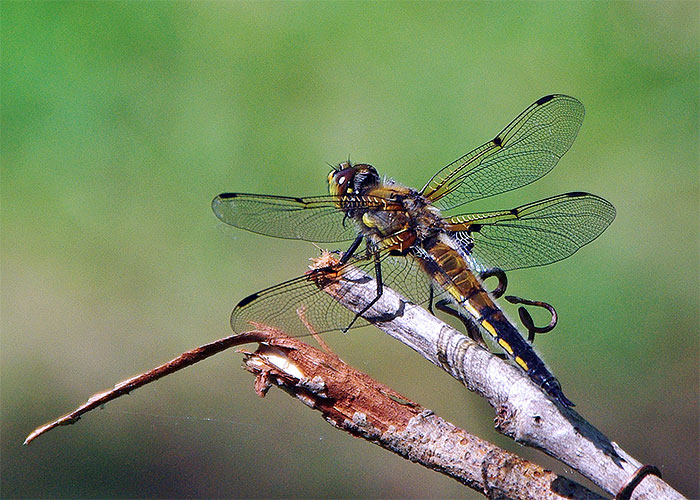 Mr. and Ms. FSS mate in the air, and with the male hovering nearby to protect her, the female lays her eggs on aquatic plants. When they hatch, the naiads “sprawl” on the debris of the lake/pond bottom and wait for their prey (aquatic insects and the odd tadpole) to walk/swim past. The naiad stage lasts two summers and when it does emerge as an adult dragonfly, the FSS does so nocturnally.

The BugLady loves to watch Blue Dashers (Pachydiplax longipennis) and the next species, Slaty skimmers, chasing each other around the cattails on a small lake nearby. Blue dashers sit on perches with their wings cocked forward, and they adjust the position of their abdomen to maximize or minimize exposure to the sun. They defend their territory avidly, raising their blue tails aggressively and darting out at other dragonflies. When a male is engaging another male in mid-air, it tries to fly up under its rival and use its whole body to force the interloper away from the water. Blue dashers’ preferred habitat is the still water of lakes, ponds and sometimes bogs throughout much of the U.S. and just into Canada. They fly for most of the summer, and there is a small, autumn migratory movement along the Atlantic coast. 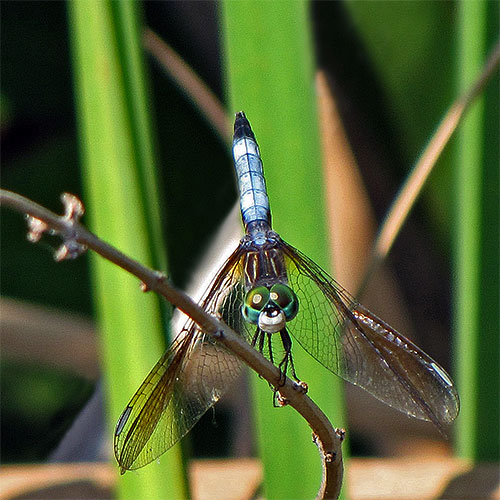 With their jade-green eyes, a slight amber wash in their wings, and a “frosted” sky-blue color on their abdomen (pruinescence, from the Latin pruina, for hoarfrost), the males are the peacocks of the dragonfly world (drab females have yellow-striped abdomens). 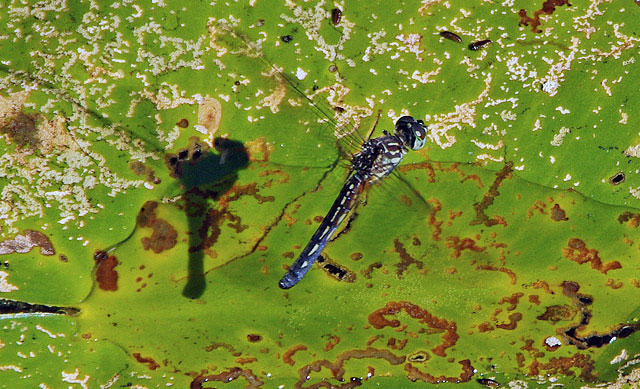 During the breeding season, a female eschews the pond and its lusty males until she is in the mood. After mating, males hover as females lay eggs. She flies at “abdomen-height” above the water’s surface; without dipping her body, she strikes the surface film with the tip of her abdomen to deposit eggs. She can lay 700 eggs every other day. The naiads are very tolerant of water that is polluted or has low levels of dissolved oxygen. 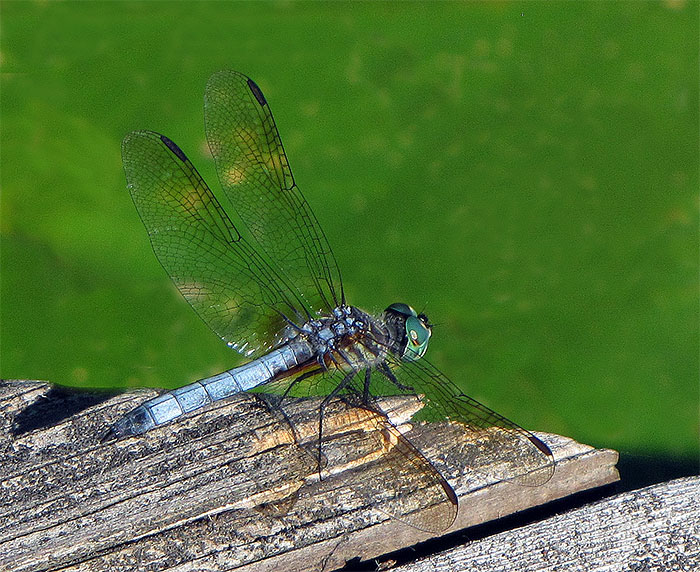 According to one source, the 300 insects an adult blue dasher puts away daily represent 10% to 15% of its body weight.

The Slaty Skimmer (Libellula incesta) is one of the BugLady’s favorite dragonflies; it is a largish (about 2”), black-eyed dragonfly that comes in a dynamite slate-blue. One of the BugLady’s general dragonfly books describes it as “common,” but Wisconsin is at the northwest edge of its range (check out Wisconsin Odonata Survey for information on the rarity and ranges of Wisconsin’s dragonflies and damselflies). It is a species of special concern in Wisconsin, with records from just a few eastern counties. Slaty skimmers like still or very slow-moving bodies of water, in or near woodlands. Like the Blue Dasher, their naiads can tolerate some water pollution. Adults are seen between early June and mid July. 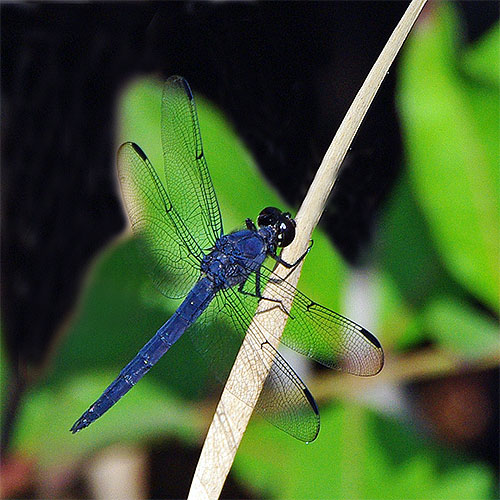 Slaty skimmers may be active all day, but they prefer the mornings. An approach by an intruding male results in aggressive displays, including maneuvers like flying horizontal loop-the-loops around each other. They may also fly into the tree-tops when alarmed.

Mating is a brief affair that starts in the air and continues on terra firma. Females lay a few thousand eggs, accompanied by but the male. The naiads prefer to live in the muck on the floor of the pond.

Remember—dragonflies pre-date dinosaurs, and back in an era whose motto was “Super-size-me,” dragonflies grew 3-foot wing spreads.