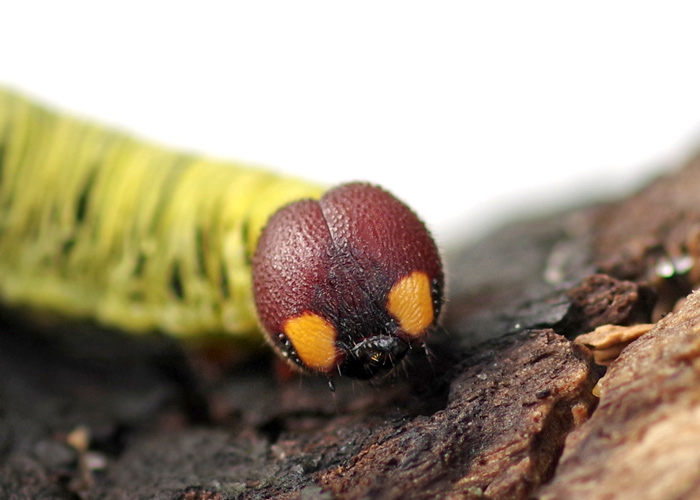 This wonderful caterpillar dropped down onto the railing the other day while the BugLady was eating breakfast on the porch (those orange spots on its head aren’t eyes, they’re just there to scare you). The Silver-spotted skipper was mentioned briefly ten years ago in a general BOTW about skippers, in which the BugLady confessed, not for the last time, that she is Skipper Challenged (Brock and Kaufman, in the Field Guide to Butterflies of North America, say that “Beginners are often driven to despair by the skippers because there are so many of them and because they are so subtle, so challenging to identify. Experienced butterfly watchers may love the skippers for exactly the same reasons.”). It deserves an episode of its own. 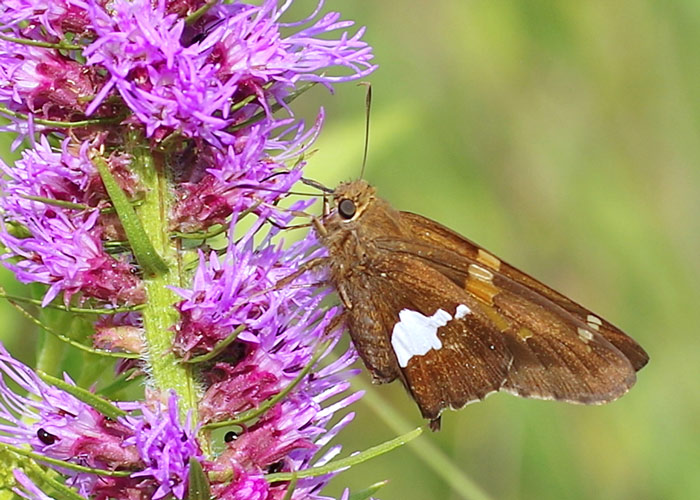 What are Skippers? They are (mostly) small, orange and brown butterflies in the family Hesperiidae, and they comprise about a third of all butterfly species. Generally, they are big-eyed, chunky, short-winged butterflies that hold their wings in a distinctive, partially-folded position at rest. Their knobbed antennae end in a hook-like tip. Despite their stubby wings, they move fast, and they’re named for their swift and bouncy flight. Although moth-like, skippers are neither moths nor the Missing Link between butterflies and moths, but are in the superfamily Papilionoidea with the rest of the butterflies.

European skippers, of recent BOTW fame, are in the Grass skipper subfamily. Silver-spotted skippers are in the Spreadwing or Dicot skipper subfamily, “dicot” being a nod to the fact that their larval food plants are not grasses (many Spreadwing species favor members of the Pea family, both wild and ornamental). These are larger-than-average skippers that, unlike their Grass skipper relatives, tend to rest with wings folded.

Silver-spotted skippers (Epargyreus clarus) are found in grasslands and woodland edges across southern Canada, in most of the Lower 48 states, and into northern Mexico; and Brock and Kaufman call them “the most easily-recognized skipper across North America.” 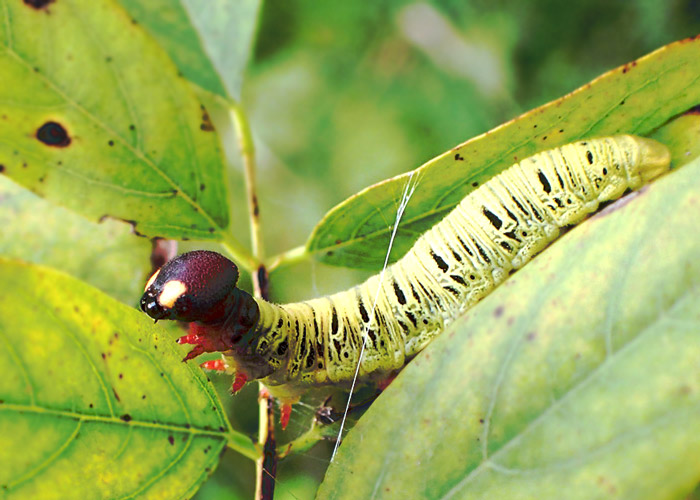 Like the Grass skipper caterpillars, Spreadwing skipper caterpillars camp out in leaf shelters that they fasten with silk. Wikipedia, whose entries on insects are often limited to a few lines about taxonomy and range, waxes positively poetical about Silver-spotted skippers, including a detailed description of building a leaf shelter (https://en.wikipedia.org/wiki/Epargyreus_clarus). A shorter account, from the Wisconsin Master Gardeners website, says “The young caterpillars live in a shelter created by a folded flap of leaf cut from the leaf margin and tied down with silk threads, while later instars tie together several leaves with silken threads to create a protective nest. They abandon smaller shelters as they grow and move to make new shelters. They leave these shelters at night or on cloudy days to feed on nearby foliage.” Caterpillars overwinter in their leaf tents and eventually pupate there. 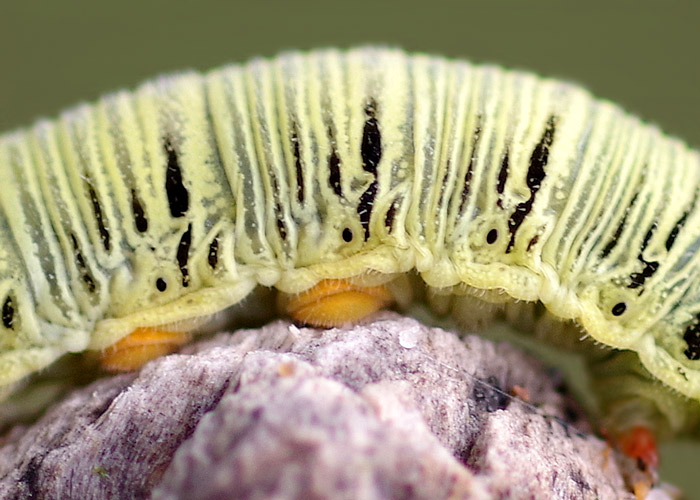 The shelters provide a only a modicum of protection from predators – despite being disguised as a clump of leaves, the caterpillars are preyed upon/parasitized by insects like assassin bugs and ants and are collected by foraging wasps to feed their larvae. Like other skippers, Silver-spotted skipper caterpillars have a unique way of hiding from parasitic wasps that find hosts for their young by following the scent of caterpillar droppings (frass); see the final paragraph of this previous BOTW for details. It’s the same theory used by birds that carry their nestlings’ fecal sacs away from the nest – piles of excrement mean that someone’s home. 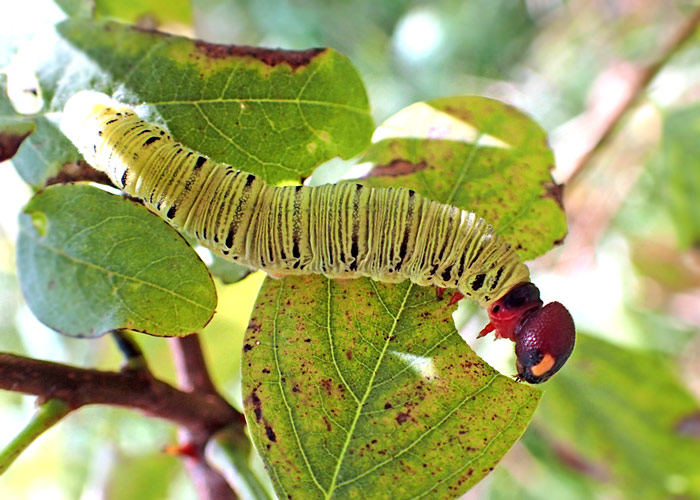 Males perch on –and defend – plants from which they watch for females, and they venture out to check anything that flies past (butterflies don’t have very good eyesight). Eggs are laid singly, sometimes on a host plant, but sometimes only near it (in which case the caterpillar must hike around until it finds the right plant). 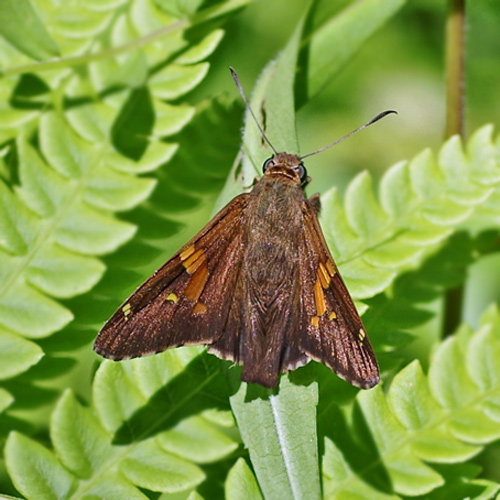 In researching this species, the BugLady was reacquainted with one of her favorite resources, the huge (150+ years) and thoughtfully analyzed database of the Butterflies of Massachusetts website. They point out that sun-loving species of butterflies benefited from the arrival of European settlers, who turned forests into agricultural fields. In the case of the Silver-spotted skipper, its status in New England before the early 1800’s, when various species of locust trees from the southern US began to be introduced there, is uncertain. If it was there before 1800, then its host plants were hog peanut and groundnut (both important food plants for the Native Americans), and it adopted locust trees later. Alternatively, it is a southern species that arrived with the locusts. A similar story could undoubtedly be told of its status in Wisconsin. 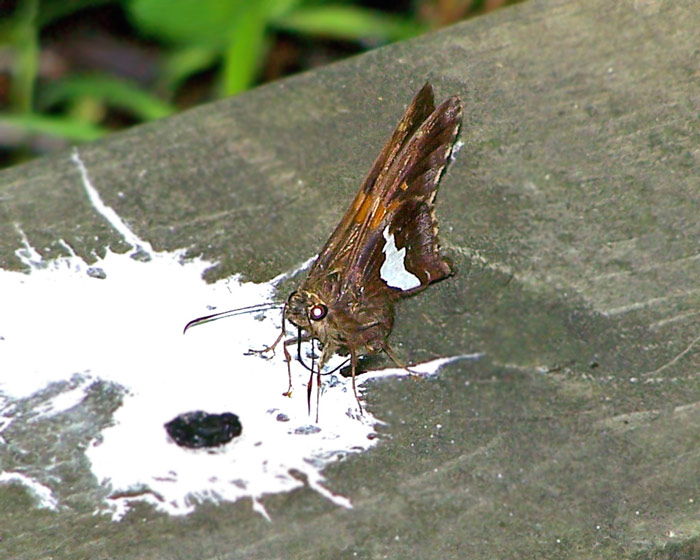 According to the “Butterflies of the Pacific Northwest” website, Silver-spotted Skippers in the Southeast have discovered Kudzu (something had to, according to the Reinartz Law of Biomass Availability – a.k.a. If You Grow It, They Will Come – Eventually), and they are enjoying a population boom there.

Adults use their long proboscis to nectar on a variety of wildflowers, most of them red, blue, pink, or purple, and they also get minerals from bird poop. They are sometimes referred to as “nectar thieves;” apparently, they can reach the inner flower parts without transferring pollen. When they’re not feeding, or when it’s cloudy or hot, the butterflies may hang upside down under leaves. 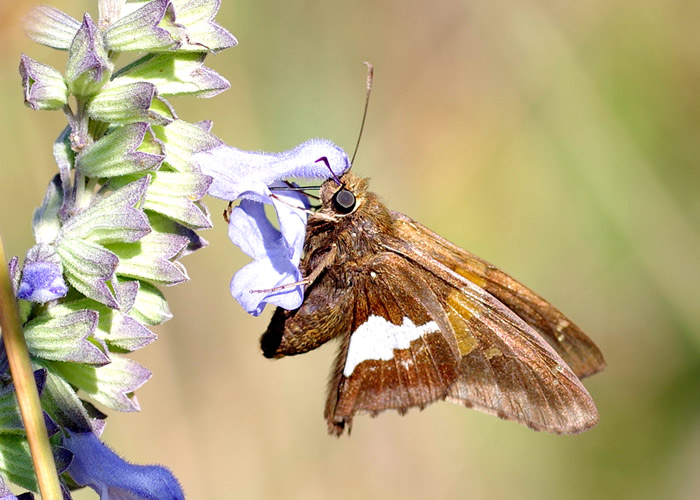 Two other nice bug information sites are the University of Florida’s “Featured Creature” series (http://entnemdept.ufl.edu/creatures/) – http://entnemdept.ufl.edu/creatures/bfly/silver-spotted_skipper.htm, which tells us that the caterpillars defend themselves by regurgitating “a greenish, bitter-tasting, defensive chemical.” And another Bug of the Week, (http://bugoftheweek.com/blog/) this one by Michael J. Raupp, PhD, Professor of Entomology, Extension Entomologist, at the University of Maryland, who refers to Silver-spotted skippers as “rambunctious”.

One last thing about Silver-spotted skippers, from the Massachusetts Audubon Society website: “Silver-spotted Skippers may occasionally be heard in the field. Their rapid wingbeats produce a whirring sound audible at close range.”

Go outside – listen for bugs!