Sometimes when the BugLady ventures out to photograph insects, loaded down like a pack mule with film camera and lenses, digital camera and binoculars, the Bug Lady’s offspring (and they do hate being called larvae) observe, as their mother sprawls on the ground or wraps herself around a tree trying for the best angle, or needs a crane to get back upright, that the best pictures appear in back of the camera. The Bug Lady responds that parents lie awake at night thinking of ways to embarrass their children; get used to it. But where were we? Oh yes, sometimes when the insects are playing hard to get, there are still plenty of signs that insects are around. Keep that in mind on your own hikes. For example:

Solitary Leaf-cutter bees use their sharp mandibles to cut ovals and circles out of leaves, using the oval pieces to line a tunnel in wood or soil and the round ones to create individual cells within the tunnel. Into each cell, the bee stuffs an egg and a mess of pollen and nectar. The larvae eat the food provided and pupate without ever leaving the tunnel. The egg chambers are arranged end-to-end, and according to the Audubon Society Field Guide to North American Insects and Spiders, although the adults may mature randomly within the tunnel, everyone waits until all adults have emerged from their pupal cases and then they exit the tunnel sequentially!

Leaf miner larvae rummage around between the top and bottom surfaces of leaves. That they eat and shed as they go—larvae are lean, green eating machines—is demonstrated by the width of their tunnels, which start small and gradually get wider. These tunnels are frequently caused by larvae of flies; when it is ready to pupate, the larva (maggot) exits at the side of the leaf and pupates on the ground. 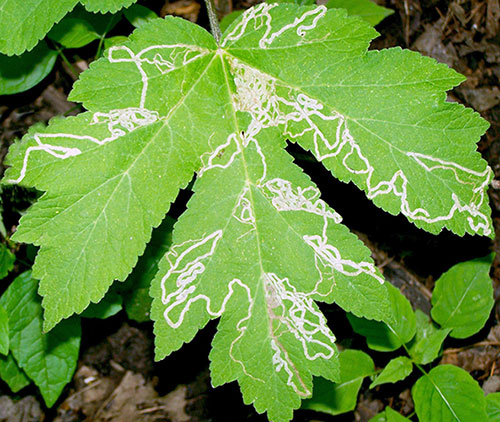 Leaf skeletonizer larvae often feed in groups. When they are young, they eat only the soft tissue between the leaf’s veins, but as they get bigger, they may tackle the tougher, small veins, leaving only the larger ones untouched. Some moth and beetle larvae are among the skeletonizers. 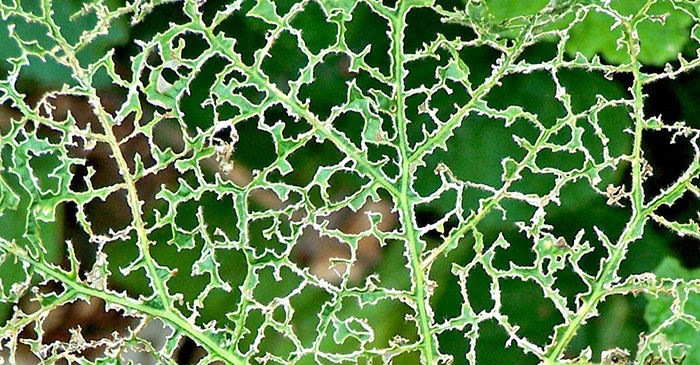 The BugLady loves finding the delicate tracery of insect tracks in sand and dust—how cool is it that an animal that’s “as light as a feather” leaves an impression on the earth!