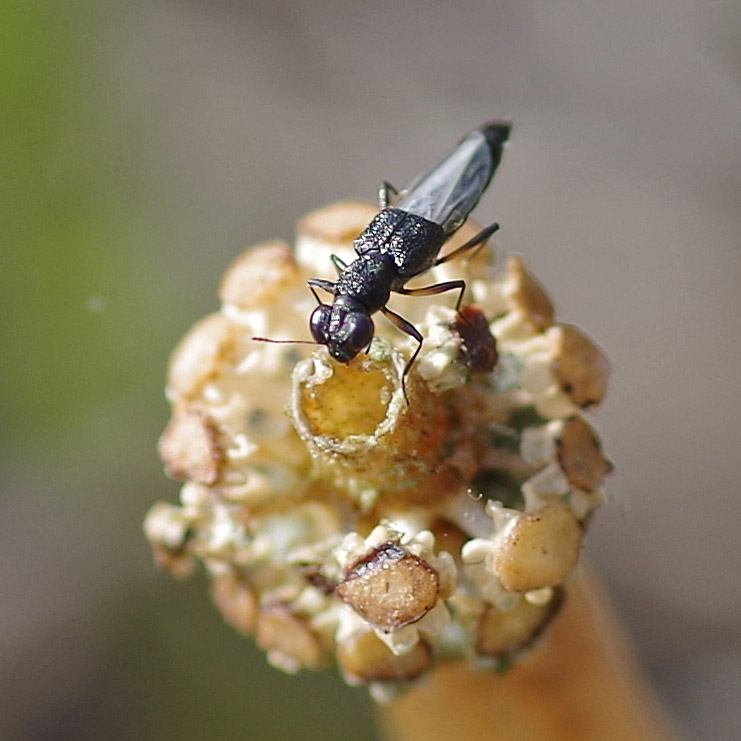 The BugLady is getting close to 600 of these episodes (probably would have done a few things differently if she’d known). Some are memorable to her because the writing has stood the test of time, others because the star of the show is a particular favorite, and still others because the bug turned out to be just so cool! That has been the fun of BOTW—discovering the amazing, and sometimes surprising, design features and super powers that insects have. The shore rove beetle was one of those. The BugLady found it by accident six years ago while she was doing something else. She hasn’t seen one since, but it just stuck in her brain.

Sometimes (often), the facts about an insect do not come tied up neatly with a bow, and the research seeps out of the realm of the six-legged and raises as many questions as it answers. 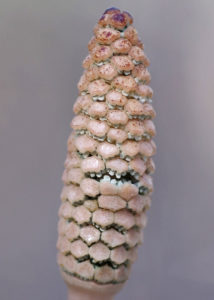 In early May of 2014, the BugLady was photographing Equisetum/Horsetail (because it’s such a neat plant) not far from a wetland edge. Field horsetail (Equisetum arvense), a common roadside species, first raises a tan, non-photosynthetic, fertile stalk topped by a structure called a cone, which bears the spore-producing sporangiophores (modified leaves). Spores are released, and this stage is followed by a sterile, green plant that looks like a mini-pine tree and that photosynthesizes, its energy stored in a perennial rhizome. In other species of equisetum, the fertile cone is located on top of the sterile stem (for an equisetum side trip and The. Most. Awesome. Video. EVER! 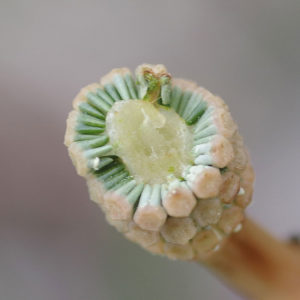 The BugLady noticed that the tops of some of the cones had been grazed. Who did it? Based on the height of the truncated stalks, the likely suspects are rabbits or red squirrels. The BugLady found a lot of information about the unwholesomeness of the sterile Equisetum plants for livestock, and about its medicinal uses, but not much about the fertile stalk. The spores pack no nutrients for the future plant—they do contain chlorophyll and some moisture—they have to hit the ground running (pollen, on the other hand, is rich in nutrients). Are the spore-producing tissues nutritionally desirable? Similar structures in certain fungi contain lipids and proteins. The fertile Equisetum plant has apparently been eaten (with caution) for millennia, and the cone is listed as “edible” in a few (very few) foraging books. 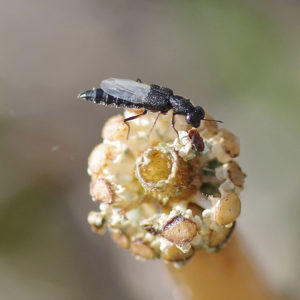 She was not expecting to see any Equisetum/insect interactions, and yet she observed a sawfly ovipositing into a horsetail stem (a story for another day), and she found this small rove beetle in the genus Stenus, doing… something.

Rove beetles (family Staphylinidae) comprise the largest beetle family in North America (in the world, maybe, with the possible exception of the weevils), and they are a very diverse bunch. The US hosts more than 5,000 species of these typically small, slender, speedy beetles, with their much-shortened elytra (wing covers). Although they may look wingless, their wings are folded underneath (like Origami, said one source), and they are good flyers. When alarmed, they posture like a scorpion, but they’re harmless (well, except for the caustic/nasty-tasting chemicals that some deliver from the tip of the abdomen). Their lives are often lived under the cover of leaf litter.

The genus Stenus is in the subfamily Steninae, the Water Skaters/Water Gliders, and they’re described as semi-aquatic. It’s a large genus, with 167 North American species, and for once, the BugLady is not going to try to guess which. Turns out that there are a number of super powers residing in that bug-eyed little body.

So, what was this rove beetle doing on the Equisetum? Not eating it (probably…) as these are carnivores. (OK, the Peterson Beetle guide says “all are believed to be carnivorous”).They make their living hunting springtails, mites, aphids, and other tiny invertebrates along the marsh and stream edges they inhabit. Whether Stenus is eating the plant tissue or going after another invertebrate feeding there, it would seem to be taking advantage of a break in the cone that was initiated by something larger.

Stenus has developed a pretty awesome adaptation that increases its odds of putting food on the table—a mouth part (labium) that it can extend like a telescoping pole just by increasing the blood pressure to that area. Springtails have pretty fast reflexes, and sources disagree about whether that they are too quick for Stenus to be successful consistently (and springtails are covered with slippery scales that are sacrificed if they get grabbed).

Rather than being a sharpened “harpoon,” the labium is covered with a variety of bristles and by pores that secrete a glue that sticks to about any surface. When it scores a bulls-eye, the Stenus retracts its amazing mouthpart, pulling its prey up to its mandibles (which are described as “sickle-like”) and injecting pre-digestive juices that soften the hapless critter. The BugLady likes to photograph mini-critters, but the Scanning Electron Microscope (SEM) does it better. This highly specialized mouthpart seems to argue against herbivory.

Stenus also enjoys Better Living through Chemistry. Some, but not all, members of the genus live in close association with water, where they are small enough and light enough to scoot across the surface film (at 2 – 3 cm/second) without breaking through. In the event that they do perforate the surface film or if they need to move more hastily, they can release a hydrophobic (water-repelling) alkaloid called stenusine from the tip of their abdomen. Stenusine spreads quickly and forcefully across the water’s surface, and the “equal and opposite reaction” is that the beetle shoots forward at speeds between 45 and 70 cm/second (the equivalent, say the people who did the math, of a human-sized beetle being propelled up to 550 mph). After a few such squirts, the beetle must replenish its stock of stenusine.

But Stenus species that are not intimately associated with water also produce stenusine. Why? Stenus rove beetles groom themselves. A lot. And they spread stenusine and a few related chemicals all over themselves. (It’s called “secretion grooming.” Isn’t scientific terminology grand?) Why? Turns out that these substances are toxic to fungi and bacteria that might afflict the beetles, and they act as “feeding deterrents” for the beetle’s predators.

Final “Whys” of the day. Stenus beetles also manufacture a chemical called cicindeloine. It’s part of the anti-predator/anti-microorganism cocktail. There’s a (European) rove beetle with the name Stenus cicindeloides that looks like a cookie-cutter Stenus. But chemicals are generally named after the organism that produces them, and Cicindelidae is the family name of the Tiger beetles. So, why is there a rove beetle species and a rove beetle protective chemical named for Tiger beetles?

A day in the life of a BugLady.