Sometimes, the origins of insects’ names are pretty inscrutable, but not that of the Seven-spotted Ladybug. Its name does need a little unpacking, though – like the firefly/lightning bug, the ladybug/ladybird is a beetle (alternate name, lady beetle). The Lady in question is the Virgin, to whom the people in the Middle Ages prayed when aphids were devouring their crops, and who is said to have responded by sending this species of aphid-loving beetle. In gratitude, people named them “the beetle of Our Lady,” a name that proved cumbersome and was shortened first to “Our lady’s beetle” and then to “lady beetle.” According to one source, its seven spots symbolize Mary’s seven joys and seven sorrows. 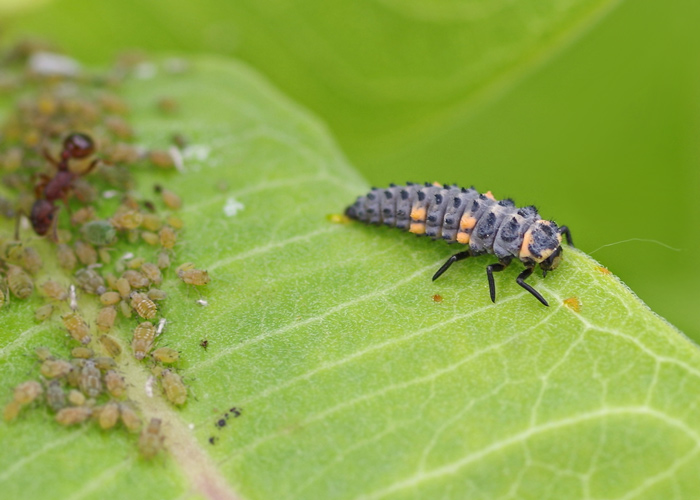 Perceptive BugFans are thinking, “Wait a minute – didn’t the Middle Ages happen in Europe? Is this another exotic beetle species? Yes and yes. Its historic range is Eurasia (it’s said to be the most common ladybug in Europe), but it was introduced to North America in the 1950’s (and the 1960’s and the 1970’s) as a biological control. Now, it can be found wherever there are aphids, which means ag-lands, grasslands, gardens, open woodlands, marshes, etc. 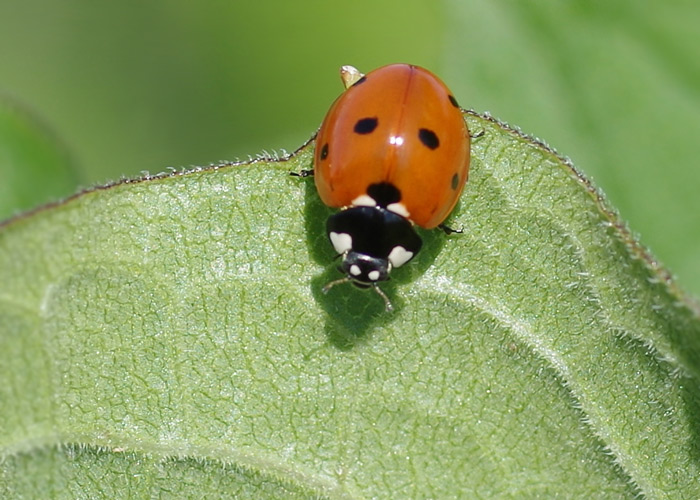 The Seven-Spotted Ladybug (Coccinella septempunctata), family Coccinellidae, is one of about 5,000 species of ladybugs in the world. Most species come on a pretty basic chassis with a variety of dots and dashes against a background that varies from yellow to pink to red to black, sometimes within the same species.

At 7 to 10 mm long (¼” or so) the SsL is one of our larger ladybugs. As promised, it has seven spots distributed over its elytra (hard wing covers). The number of spots can be diagnostic in ladybug species, except when it’s not – Multicolored Asian lady beetles may have zero spots or many, and “teneral” forms, newly-emerged beetles whose colors haven’t “set” yet, can be deceiving. 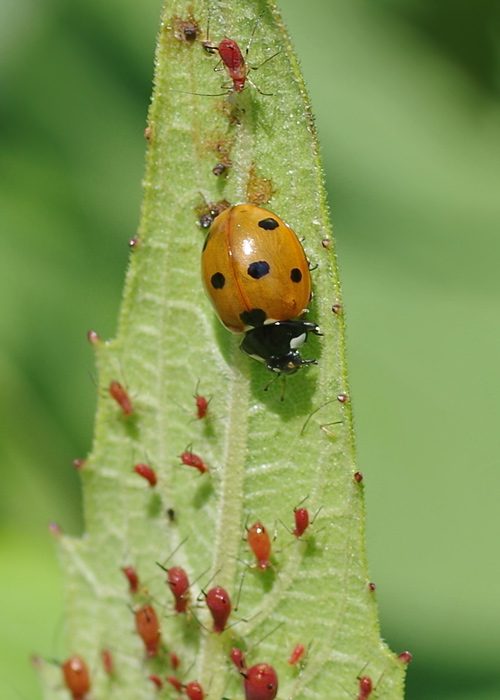 Thorax patterns may be more reliable. For instance, no matter what color they are or how many spots they have, most Asian ladybugs have a “W” at the top of the thorax (or “M,” depending on which side of the beetle you’re standing on). The BugLady’s favorite pattern is the Red ladybug, with its curlicues. There are two, white spots on the SsL’s face, and its thorax is mostly black, with the head framed by two white “squares.” The large, black spot at the front of the elytra is bordered by a white “bowtie.”

In North America, booming populations of SsLs may be out-competing native ladybugs (they are considered by some to be invasive); while in England, where they’ve sometimes occurred in disconcertingly large swarms, SsL numbers have declined with the influx of the Harlequin/Multicolored Asian ladybug. For the story of the infamous Asian ladybug, check out a previous BOTW from 2015. 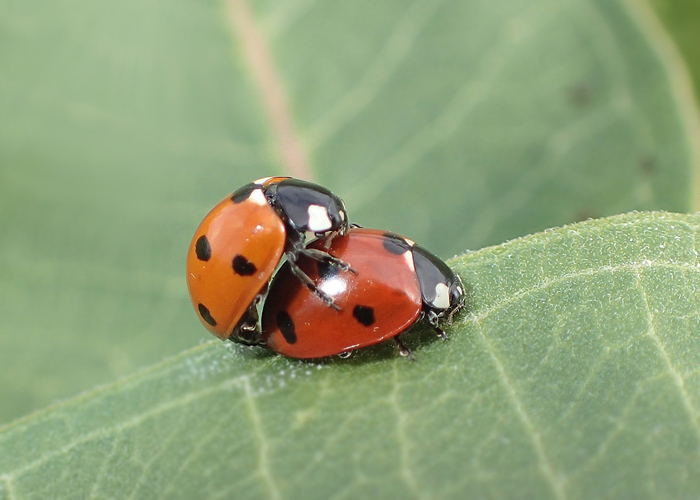 SsL’s are promiscuous, mating several times a day. Females may lay eggs on aphid-rich vegetation immediately, or, in fall, may store sperm and lay eggs in spring so their larvae have a more robust food supply. Adults overwinter in a state of diapause (dormancy) in leaf litter, dense vegetation, under tree bark, and in other sheltered spots, often with other SsLs (up to 200 of them) that they attract using pheromones (and when spring comes, it’s party time). 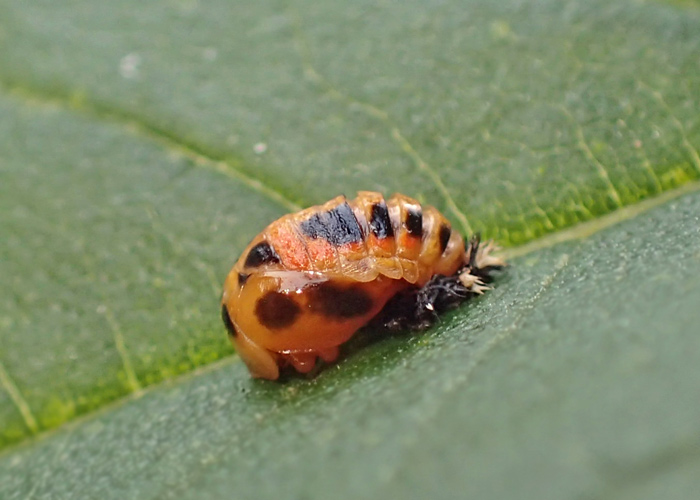 A female can detect the “odors” of eggs of other ladybug species and will avoid placing eggs in the wake of another female. When it hatches, a larva eats its egg shell and any unhatched eggs of its siblings, and then starts in on aphids and other small invertebrates that it finds on the leaf’s surface (including, alas, monarch eggs and tiny caterpillars). When they are small, they simply suck out their prey’s juices, but older larvae chew up the whole thing (ladybug larvae are always likened to tiny alligators). Ladybugs are unusual among insects with complete metamorphosis (egg-larva-pupa-adult) because both the larvae and the adults occupy the same spaces and eat the same thing (in a pinch, adults may eat pollen and nectar, too).

Several sources said that during its lifetime, a single SsL can put away as many as 5,000 aphids! How do they find the aphids? They pick up on the chemical traces emitted by plants that are being grazed by aphids, and they can also sense the alarm pheromones of the aphids themselves.

Ladybugs pupate right out there on the surface of the leaf; read about how they get away with it in a previous BOTW.

And speaking of “out in the open,” how does a brightly-colored beetle live in plain sight without getting eaten? Like other ladybugs, SsLs release toxic/bad-tasting droplets from their leg joints when threatened (reflex bleeding). So, their bright colors are aposematic (warning) coloration. Despite that, they are eaten by other ladybugs and by a variety of spiders, birds, and small mammals, and they entertain many parasites.

For an informative, off-beat approach to ladybugs and some great pictures, check out this article from Ask an Entomologist.

FUN FACT ABOUT SSLS – they are the State Insect of five states. The BugLady always thinks it’s a waste when State Insects are non-native (other categories, too – the State Birds of Delaware and Rhode Islands are chickens). Wisconsin’s State Insect is the European honeybee.