The BugLady’s #3 child nailed it years ago when she proclaimed her mother an “Essoterrorist”—someone with a fondness for squirreling away obscure facts. Here are some of the Bug Facts that she’s come across while looking for something else.

As overzealous communities in the path of the Zika virus consider “nuking the wetlands,” remember that Zika-carrying mosquitoes don’t rough it out in the wild, they are suburban-urban-dwellers. “There are over 3,000 mosquito species worldwide, but only a couple of hundred are important medically,” says Janet McAllister, Ph.D. of the CDC. “That’s because most species of mosquito don’t even bite humans—some prefer other animals like amphibians and reptiles.” See five common mosquito myths at this Huffington Post article Mosquito Myths: Misconceptions About The Insects And Their Diseases. The average mosquito consumes 1/1,000,000 gallon per bite (it would take 1,129,000 bites to drain the blood from the average human) see Mosquito Facts! Mosquito Life. 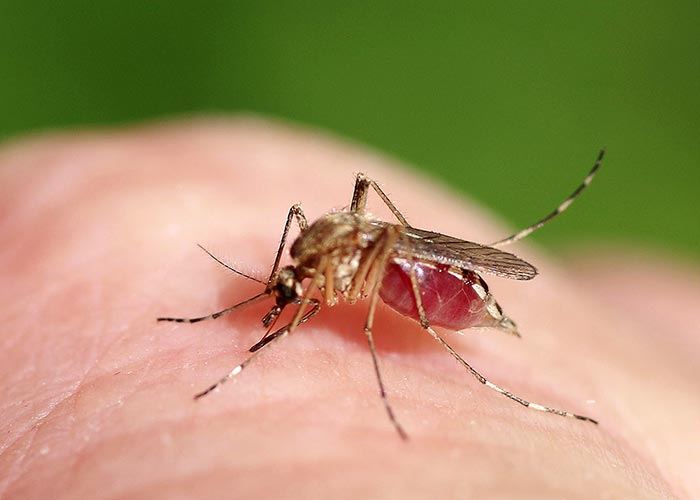 Insects in the Art Gallery 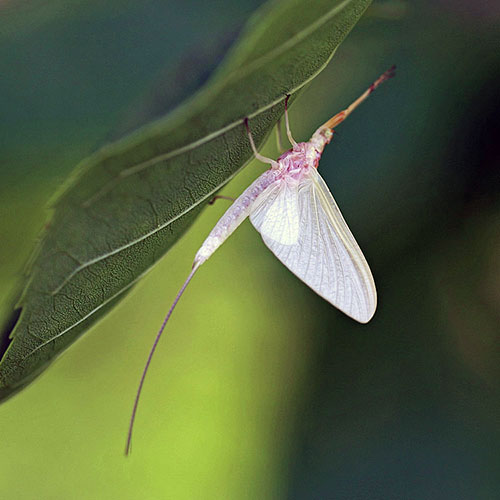 Another gem from Wikipedia: “Arthropods are so versatile that they have been compared to Swiss Army knives.” 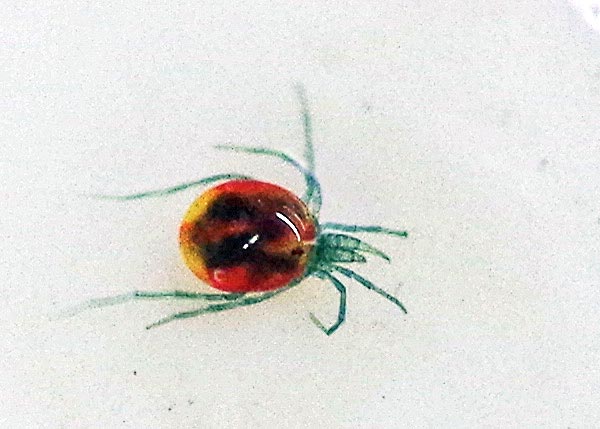 In an article in Science magazine in 2010, author Robert M. May considers how to answer an extraterrestrial’s obvious question “How many distinct life forms—species—does your planet have?” But, he notes, look who’s doing the counting. He tells us that “we began systematically naming species just a little over two centuries ago, and that our labor force is inefficiently distributed: about one-third of taxonomists work on vertebrates (at most 1% of the total number of species), one-third on plants (around 10%), and the remaining one-third on invertebrates (comprising at least 90%). Furthermore, a lack of broad, synoptic databases and problems with synonyms—the same species cataloged differently in different collections—means that we are uncertain, by around 10%, of how many distinct species we actually have named and recorded.” So, what’s the grand total? Read all about it at the ResearchGate downloadable article Tropical Arthropod Species, More or Less?.

A spoiler alert from May: “Overall, these conclusions imply that around two-thirds of all arthropod species still await discovery and description. In part, this sorry state of affairs reflects inefficient distribution of taxonomic attention, which is disproportionately directed to the more appealing furry and feathery vertebrates. It also often reflects a tendency for funding agencies, in the United Kingdom and elsewhere, to view research on basic systematics and taxonomy as insufficiently sexy…. My guess is that the hypothetical aliens would take a dim view of all this.”

Plutarch May Have Gotten This Wrong

About dung beetles, sacred to the Egyptians, Plutarch wrote: “The race of beetles has no female, but all the males eject their sperm into a round pellet of material which they roll up by pushing it from the opposite side, just as the sun seems to turn the heavens in the direction opposite to its own course, which is from west to east.” 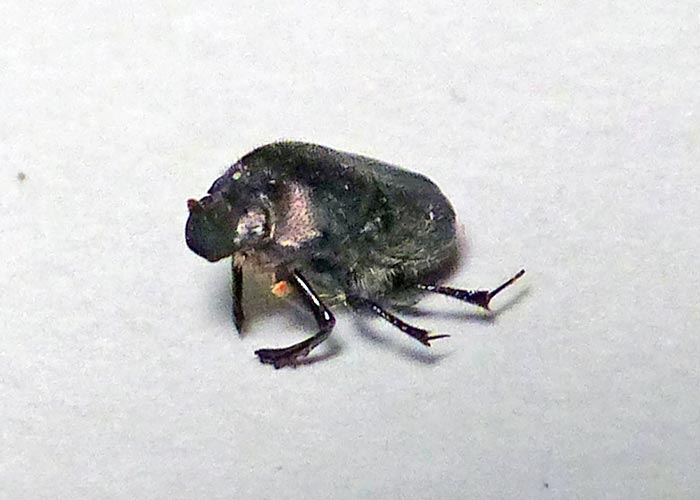 Not Just Another Pretty face

The BugLady crowds her front porch with geraniums each summer and brings them all inside (usually at midnight, with a heavy freeze descending) and then abuses them all winter by forgetting to water them (her picture is probably posted near the cash register at area garden stores—Do Not Sell to…). Now she appreciates them even more. Turns out that chemicals in the petals (maybe the leaves, too) paralyze herbivores like Japanese beetles for a few hours, during which time they are more vulnerable to predators according to the article Plant Defenses Against Insects by the University of Connecticut Extension. 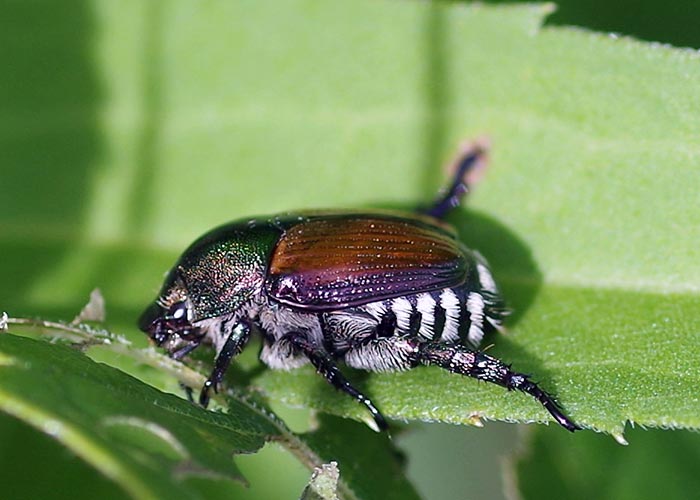 Researchers drove two road routes (one forested, one urban) through the Northeastern part of the continent to test an old insect censusing method made new—they substituted sticky tape on the front bumper for the time-honored radiator grill. In analyzing the 400,000 bits of DNA found adhering to the tape, they identified up to 2,000 insect species and many (many) species of bacteria, as well as other microbes, plant bits, and non-insect animals (including human). It’s called metagenomics—the study of DNA recovered from environmental samples, and needless to say, the database/technology for this kind of sampling is being built on the go. For a very scientific explanation: see Windshield splatter analysis with the Galaxy metagenomic pipeline; for a slightly less scientific explanation: Mental Indigestion. 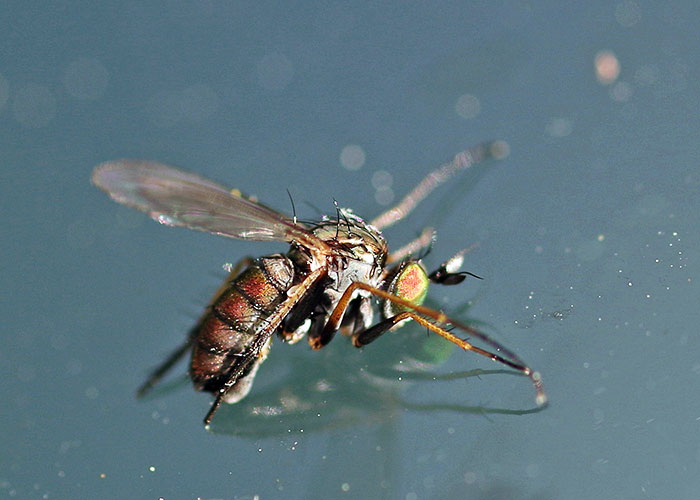 Scientists Worthen and Hart, who were studying the ability of some dragon/damselflies to reject parasitic mites more effectively than others, made these observations (Hydraphantidae Limnocaridae, and Arrenuridae are mite families): Hydraphantids and limnocarids have terrestrial larvae that either leap from the surface of the water to infect mature odonates in flight or colonize odonates perching along the shoreline [emphasis, the BugLady, who has no visual of a mite leaping]. Arrenurids have aquatic larvae; most species colonize odonate naiads and begin to feed on the emerging adult at ecdysis, but some species colonize mature odonates returning to water to mate or oviposit (see article in the Journal of Insect Science. Mites like crane flies like the one pictured here, too, many of whose larvae are aquatic. 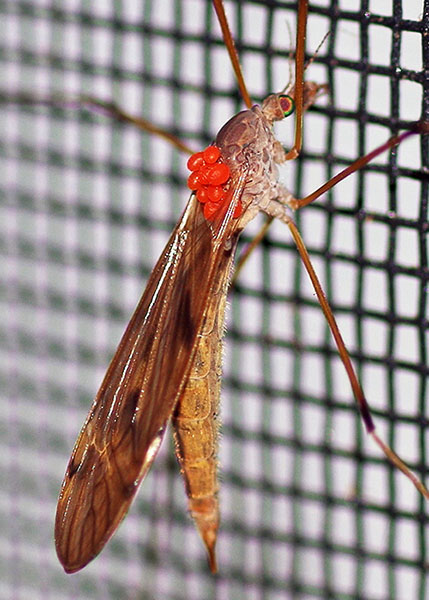 Oriental hornets (Vespa orientalis) generally build their communal nests underground, excavating bits of soil and building cells for eggs and larvae, (they may opt for an above-ground, paper nest). Either way, it’s dark inside—how’s a gal supposed to tell which way’s up?

It turns out that they orient using gravity, but they also embed (using saliva) a tiny “keystone” crystal in the “ceiling” of each cell. “The resulting network of crystals, researchers say, may serve the same purpose as a surveyor’s level, helping the insects maintain symmetry and balance when building their precisely oriented and uniform nests,” see Keystone-Like Crystals May Help Hornets Construct Their Combs.

Vibrations in the nest cause the crystals to vibrate and allow the hornets to gather information. Says John Pickrell in “Mystery in a Hornet’s Nest,” “When the hornets tap the hive surface with their feet, the crystal does not dance in the same way as the rest of the comb, enabling the insects to glean information about the orientation of their nest.”

The tiny, magnetic crystals contain titanium, oxygen, iron, and carbon—all elements that are readily available in the hornet’s environment—and in their bodies; there is speculation that rather than hunting for them, the hornets manufacture the crystals themselves! Oriental hornets are multitalented; see Solar-Powered Hornet Found; Turns Light Into Electricity.

And that’s how it is—always

“Each observation, however, has raised more questions than it answers, so the sum of my watching has caused me to grow in ignorance, not in knowledge.” Sue Hubbell, chapter on Camel crickets in Broadsides from the Other Orders.

Life on the Pond