Dragonfly season can’t come soon enough. This BOTW is a renovation of a BOTW from five years ago – some new thoughts, all new pictures. Apologies – life is busy.

The BugLady is looking forward to chasing Sedge Sprites again this year. They hang out in the kinds of low, dark, inaccessible places that require contortions by photographers – places that both need a flash and are overpowered by one. And no, the BugLady has not started chasing faeries; the Sedge Sprite (Nehalennia irene) is a tiny, shiny damselfly in the family Coenagrionidae, the narrow-winged damselflies. 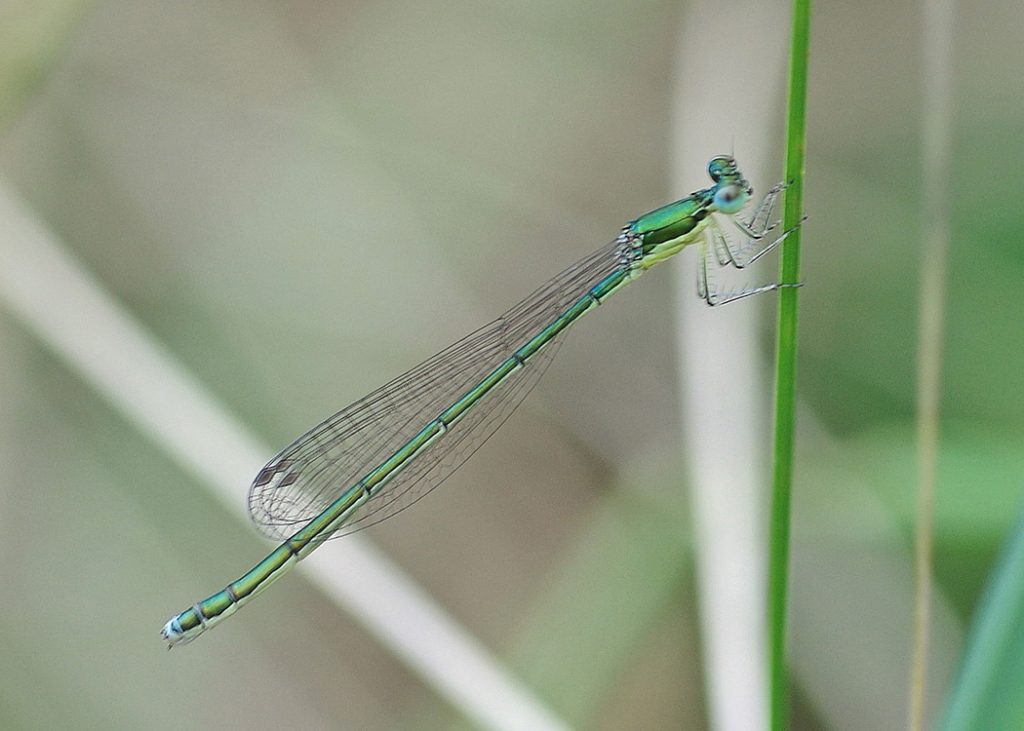 There are only six species of sprites (genus Nehalennia) worldwide (the genus name is taken from an early AD, northern European/Celtic goddess of seafarers and of others who traveled the water). One sprite is Eurasian, one lives in Central and South America (there have been a few sightings in extreme southern Florida), and the other four are North American. Both Sedge Sprites and Sphagnum Sprites (Nehalennia gracilis) are found here in God’s Country, although Sedge Sprites are far, far more common.

The sprites are sexually dimorphic – the Sedge Sprite more so than the Sphagnum Sprite – with males flashier than females. Males of both species are an audacious, metallic, emerald green above, and females are generally duller (though male-colored females do occur). Both are pale ventrally; the females are yellowish, and males are initially white below but later turn an amazing powder blue. While the last 2 ½ segments of a male Sphagnum Sprite’s abdomen is solid blue, the blue at the end Sedge Sprite’s abdomen is variably arced, showing dark spots in the blue. Female Sedge Sprites have little or no blue at the tip of the abdomen; female Sphagnum Sprites have more. Both species have blue eyes, and while they don’t have eyespots like the bluets do, there is a narrow, pale line on the “back of the neck.” They are somewhat the same color scheme as the slightly larger male Eastern Forktail (but he isn’t shiny). 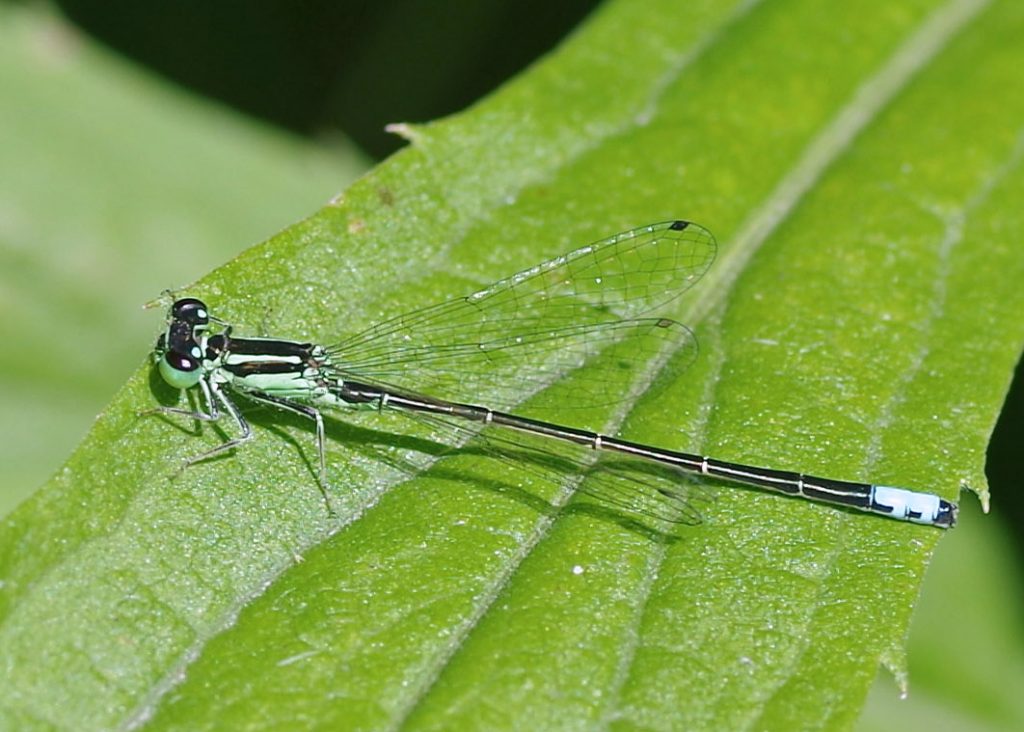 The two sprites have in common their ridiculously small size (often less than an inch), metallic coloration, and love for dense stands of plants around quiet, clean wetlands like marshes, bogs, fens and ponds. As their name suggests, Sphagnum Sprites like peat bogs, especially with floating mats.

The BugLady came across an interesting paper by Beatty, Andres, and Sherrat on the topic of sexual dimorphism in Sedge Sprites (and other organisms). Males are brightly colored, we’ve been told, so they can attract mates. Maybe not. Maybe their brilliance is a warning signal to other males not to waste their time in an energy-intensive pursuit. Male Sedge Sprites, after all, approach females from above, and his color is mainly dorsal, so she doesn’t get to see him throwing off sparks. 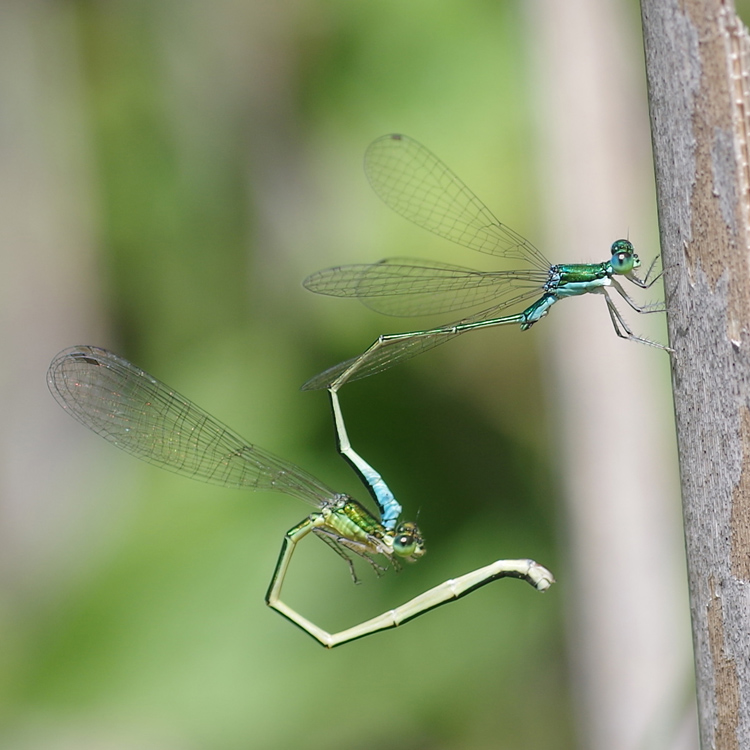 Sedge Sprites are found across southern Canada and the northern half of the US. They are said to be more common in the eastern part of their range, and Kurt Mead, in his Western-Great-Lakes-centric Damselflies of the North Woods calls them “perhaps the most abundant damselfly in the north woods.” Because they spend most of their time flitting among the stems of sedges and other emergent plants (Stokes, in the Beginners Guide to Dragonflies and Damselflies, describes them as “skulking low in dense vegetation.”), they’re easy to miss. It is, literally, like watching a sewing needle floating through the sedges.

There’s not a lot known about the life history of Sedge Sprites. Females lay eggs in floating, dead plants like cattails and sedges. Like other sprites, the male Sedge Sprite continues to clasp the front of the female’s thorax while she oviposits (it’s called “contact guarding;” other species of dragons and damsels may guard their ladies from a perch or from the air or not at all); her body is horizontal and his tilts at about 45 degrees. As Dennis Paulson says in his encyclopedic Dragonflies and Damselflies of the East, “in temperate species, pairs oviposit with male held up like little blue-tipped stick.” 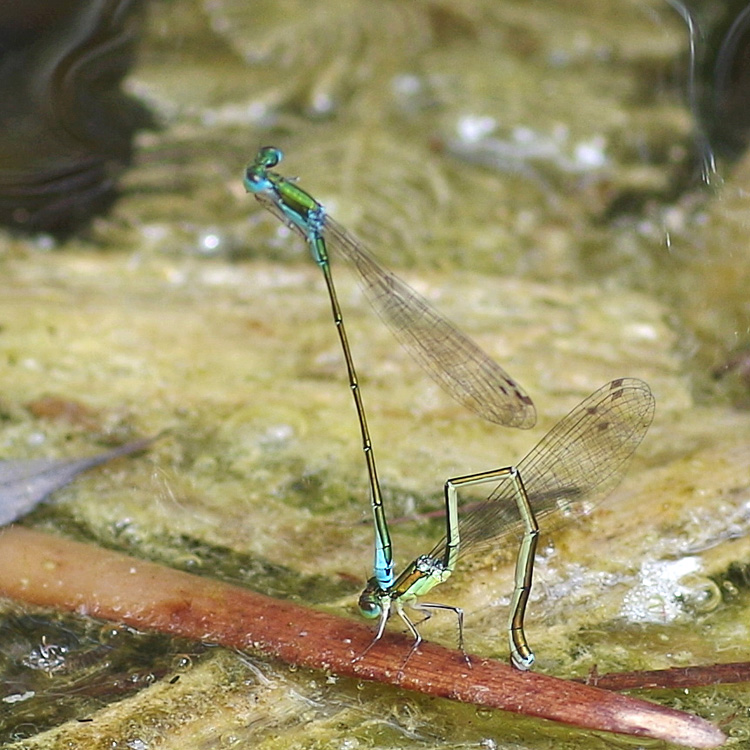 She uses a blade on her ovipositor to slice into plant tissue and then she inserts one or more eggs. According to one source, the eggs hatch in just a few days; another says it takes a few weeks. The naiads must grow and shed a dozen times before they are ready for adulthood, and their growth rate is influenced by water temperature (the warmer, the faster). They overwinter as almost-grown naiads and complete the job in early summer of the next year. Adults may feed away from water until they are ready to mate. 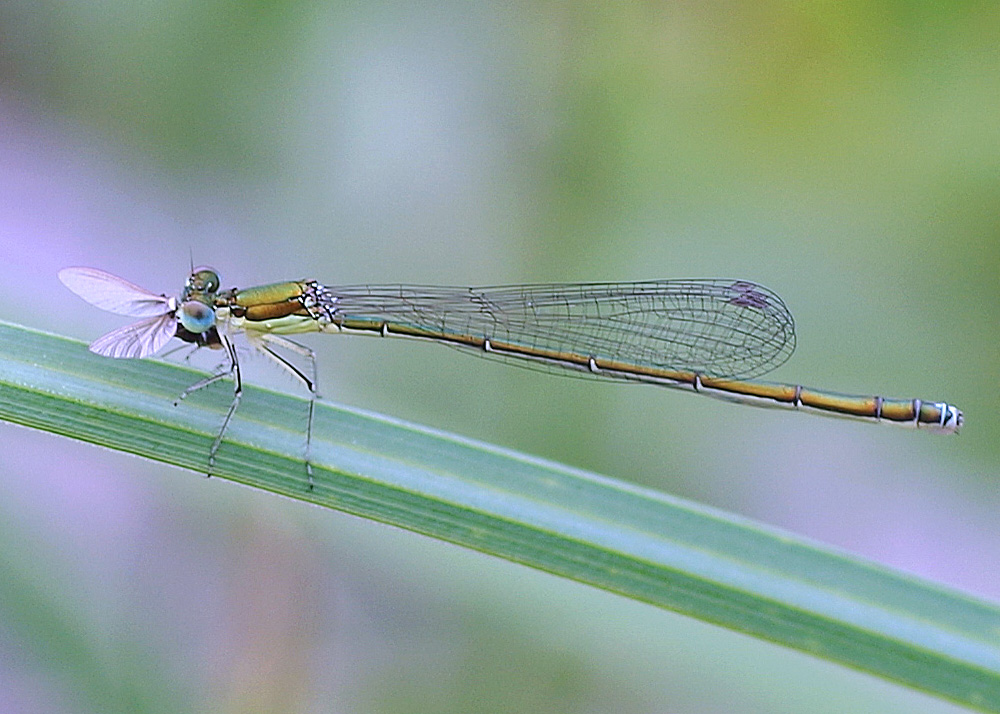 Damselflies, young and old, are carnivores. Paulson says that the adults’ “long tibial (leg) spines and wings held over abdomen when perched may indicate they are flycatchers.” Midges are probably a big part of their diet, and the aquatic naiads feed on any small critters they can catch.