It has been a hot and sticky summer (and spring), but hot and sticky seems to agree with bugs. Everywhere you look, you see adult insects, young insects, and the kinds of activity that will result in them. Here are some sights from the BugLady’s walks in southeastern Wisconsin.

Summer belongs to Bee FliesLIES, large and small. This one, Bombylius fulvibasoides (probably) is one of the little teddy bears of the bunch. Bee flies dart and hover (they’re different from flower/hover/syrphid flies, which also dart and hover), and they suck nectar through long proboscises, and when they’re not doing that, they’re looking for the nests of solitary bees/wasps, and a few others. Members of one genus of bee flies are nicknamed “bombers” for their habit of hovering at the entrance of the bee’s ground nest and lobbing eggs down into it, but others land and plant an egg on the soil near the entrance. Their offspring hatch and then hike down the tunnel to feed the larvae they find within. 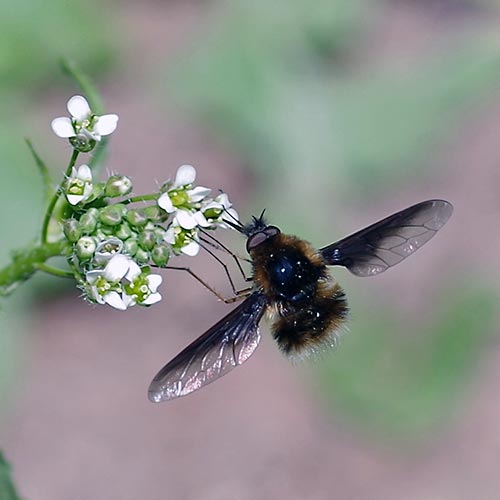 Three species of clear-winged Hemaris moths grace our area. This Hummingbird or Cinnamon Clearwing Moth (Hemaris thysbe) was ovipositing on a high-bush cranberry. Their caterpillars, whose main food plants are in the viburnum/honeysuckle family, are pretty awesome, too http://bugguide.net/node/view/71006 (and sometimes red http://bugguide.net/node/view/30160/bgimage). The moths hover at tubular flowers like bergamot, but they also like thistles. 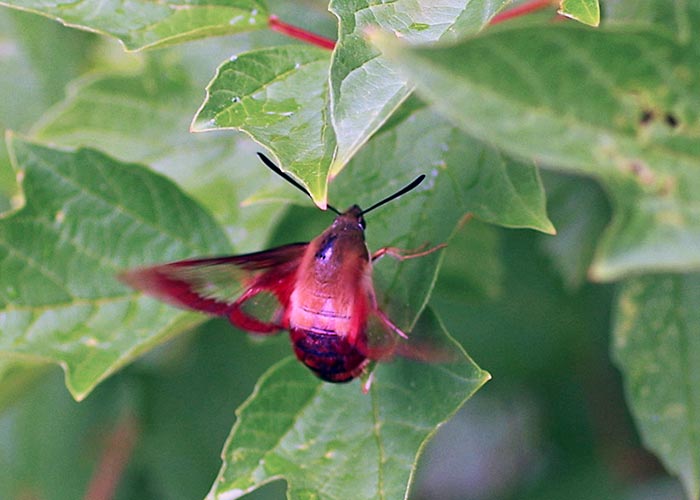 The BugLady loves naked miterwort, whose tiny flowers can be covered by the eraser on a #2 pencil. Who, she always wonders, is the flower putting on that finery for? BugFan Mary says it’s a “prom dress.” Some sources say that fungus gnats are the pollinators, but the BugLady surprised a small Click Beetle (with pollen on its antennae) whose presence seemed purposeful. 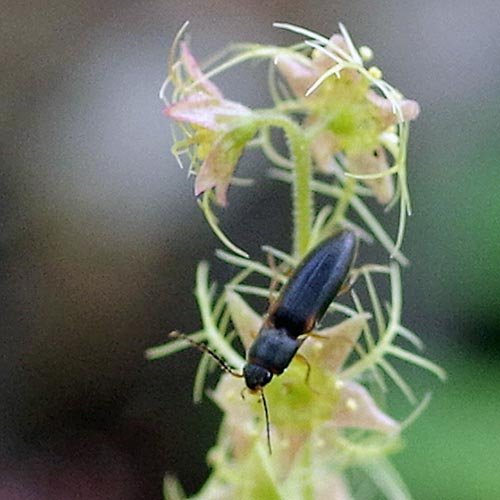 A photo essay isn’t complete without a Crab Spider? Yes, we can see you. 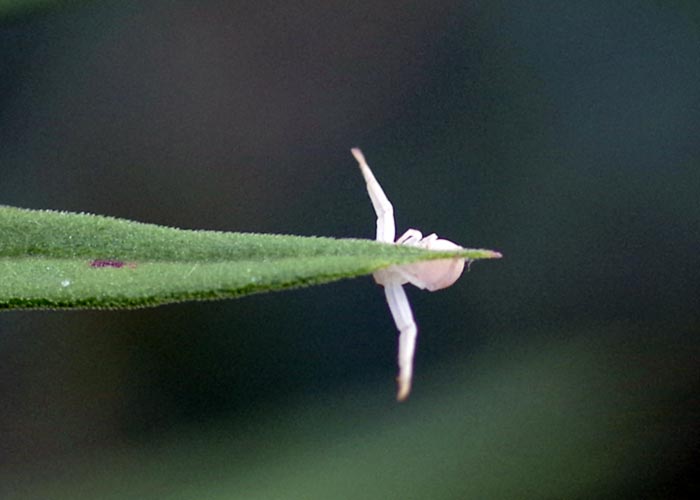 What a treat to come across a Dogbane Leaf Beetle! Its incandescence is the result of the play of light on tiny, tilted plates that overlay its pigment layer. Light bounces off both the pigment and the plates, and the colors change with the angle of the observer. Since the dogbane it feeds on is poisonous, its conspicuous (aposematic) coloration presumably warns potential predators not to mess with it. 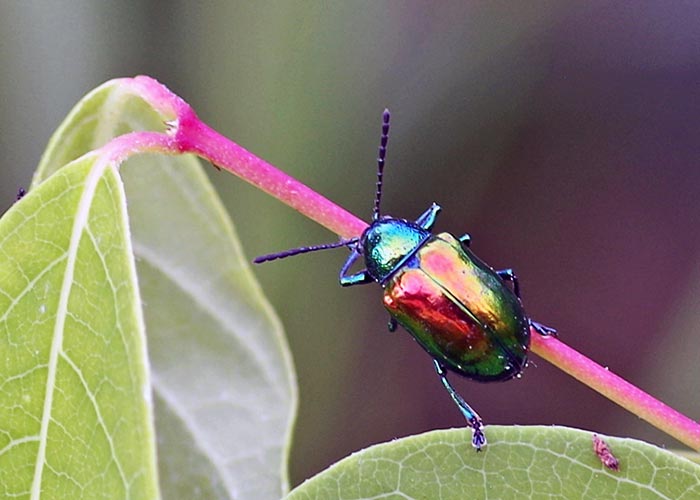 At a hair less than an inch long, Eastern Amberwings are our second-smallest dragonfly, but what a lot of bang for your buck! The BugLady heard somewhere that cameras have trouble focusing on orange. She doubts that it’s true, but she grabbed hold of it as an excuse for all those out-of-focus amberwing shots on the cutting room floor. 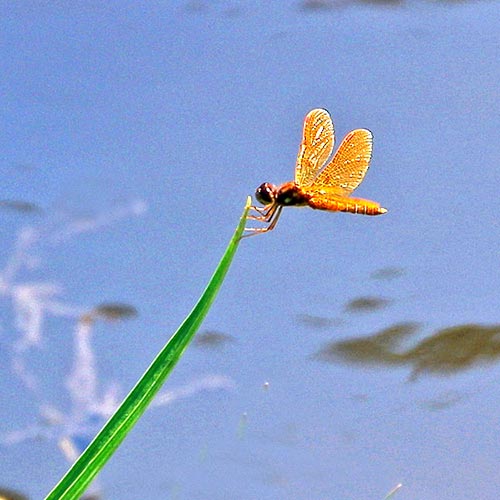 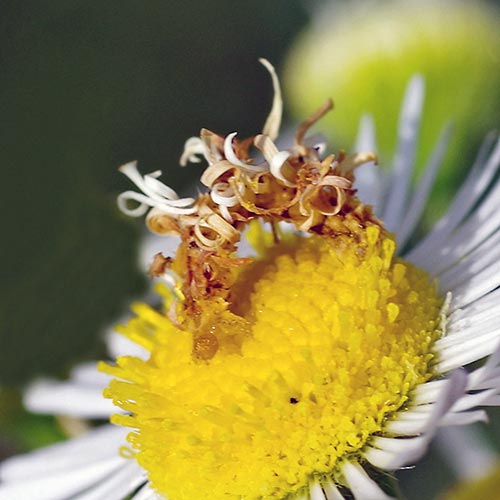 A male Bush Katydid pauses its night song to groom itself below the porch light. 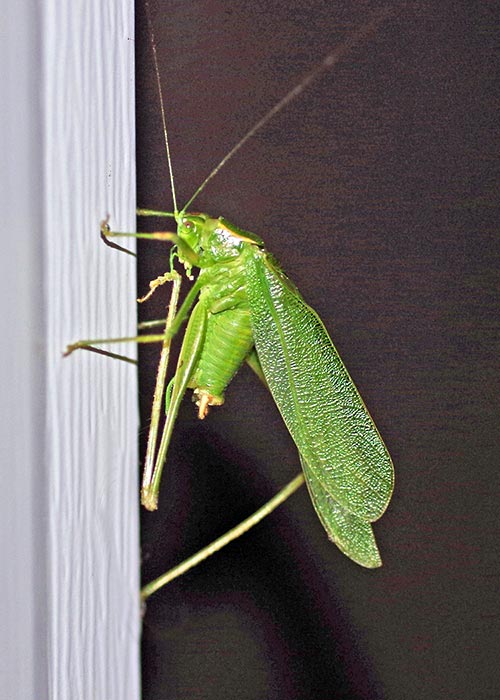 With the leaf ahead of it thick with aphids, this Asian Multicolored Ladybug looks like it’s going to start at the top and eat its way to the bottom of the milkweed leaf. Bon appetit. 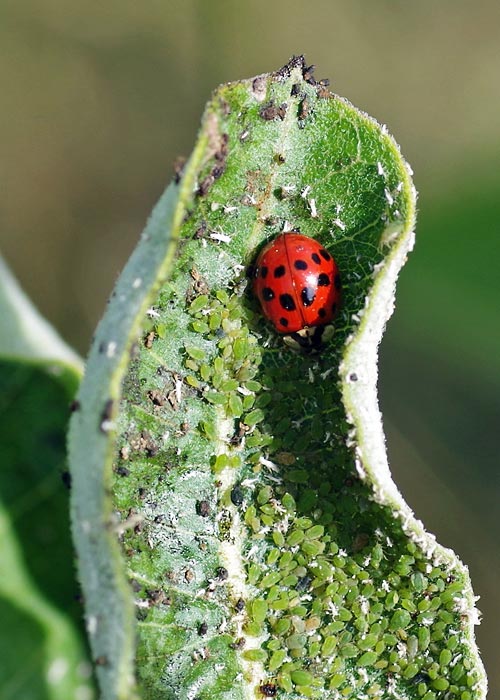 Besides invertebrates, the BugLady also stalks non-flowering plants (and flowering plants, and vertebrates, and landscapes), so this female Emerald Spreadwing Damselfly on the fertile stalk of royal fern was a “two-fer.” Royal ferns don’t hide their spore cases on the undersides of their leaves like we learned in high school, they grow them on fertile stalks at the tips of leafy stalks. There are nine or ten Spreadwings (genus Lestes) that appear throughout the season. 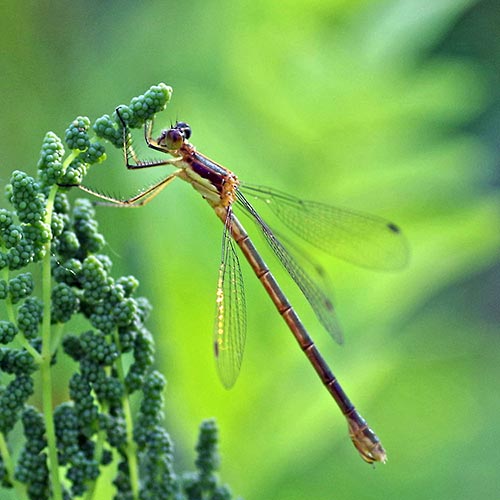 White-faced Meadowhawks in a mating wheel. He deposits bodily fluids in a receptacle (hamulus) on the underside of his second and third abdominal segments. When he grabs a female by the back of her head, she arcs her abdomen up to retrieve it, forming a wheel. The pair may sit for a while or even fly while thus attached, before she starts laying eggs. 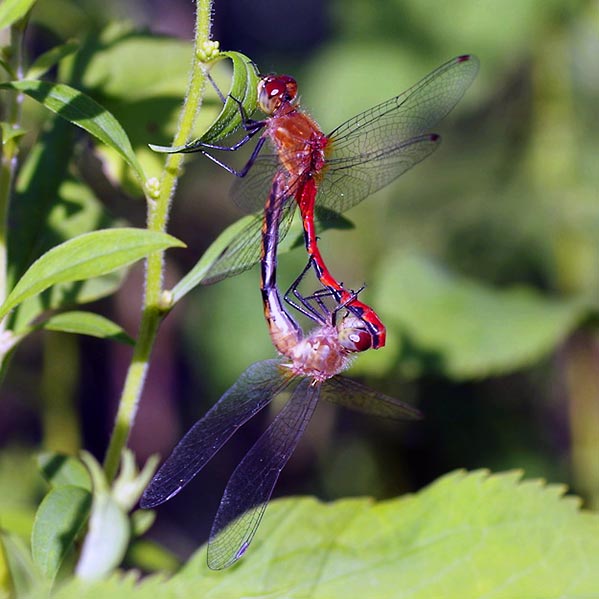 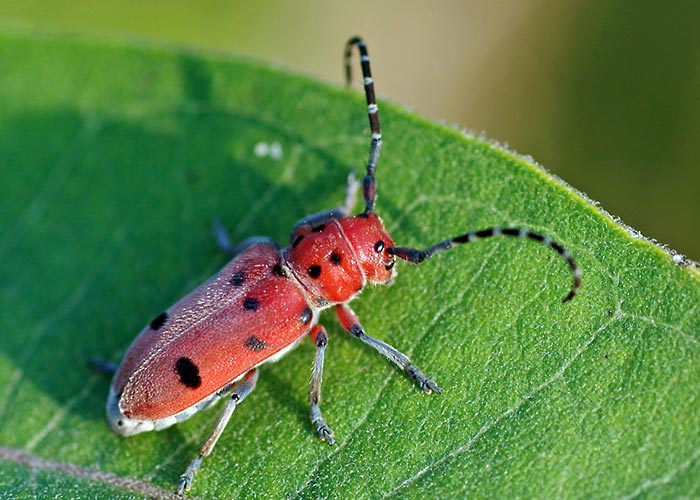 The BugLady was photographing Mullein Weevils, those imported weevils that help to control the often-invasive imported mullein, when she noted this tableaux. She fears that it did not end well (at least for the weevils). 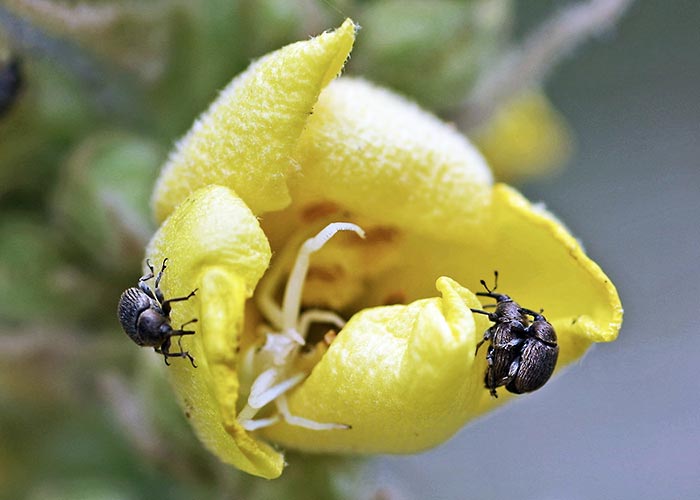 This female Robber Fly is ovipositing in an inhospitable spot, but, no worries, her offspring will hatch and drop to the ground to live in the loose soil/surface debris/rotting wood or bark. Though legless, they’re said to prey on worms, larvae, and eggs that they find around them, but feeding on plant materials, and/or “secretions” of fellow insects has also been postulated, as has a change in diet through the different larval stages. Adults spot their prey from perches, and they may grab insects larger than they are (as well as other robber flies). Some make a loud buzz in flight. 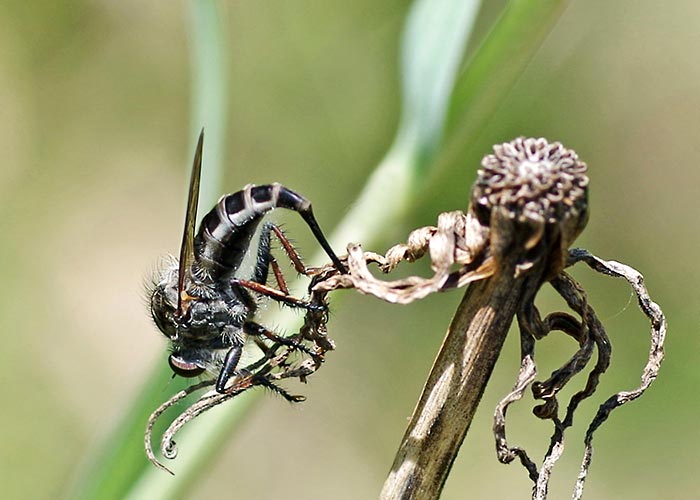 Meanwhile, tree crickets are calling in the BugLady’s field; here’s a link to the Tree Crickets (family Gyrllidae) BOTW episode. .

And – here’s a nice video and article about buzz pollination: The Secret Buzz Only Bumblebees Know To Unlock Our Favorite Crops.