OK, the BugLady could (and probably will) regale you with all sorts of arcane facts about scuds, but the main “take-home” here is—scuds are a hoot! What impresses people about scuds is their locomotion. They zip around your collecting basin, pausing under vegetation, and then they’re off again. In The New Field Book of Freshwater Life, Elsie Klots says that they walk and crawl, “‘skittering’ on their sides by flexing and extending their entire body, and frequently rolling up on their sides or back.” Anne Haven Morgan, in her Field Book of Ponds and Streams, adds that “Amphipods are accomplished water acrobats and can climb, jump, swim or glide with equal ease.” Though we know how they move about in the water, we don’t know how they hop-scotch from one drainage basin to the next.

Scuds aren’t insect “bugs”, but they are located under the giant umbrella of the phylum Arthropoda, along with insects, crayfish, scorpions, spiders, sowbugs, centipedes, fairy shrimp, and more. Arthropods (“jointed legs”) are a mighty bunch that includes more than three-quarters of all animal species. Within the arthropods, scuds are in the subphylum Crustacea and the order Amphipoda. That’s a bunch of big names for a small critter, and it doesn’t stop there—common names for this often indistinguishable bunch include freshwater shrimp, scud, sideswimmer, and gammarid (Amphipoda includes a large family, Gammaridae). 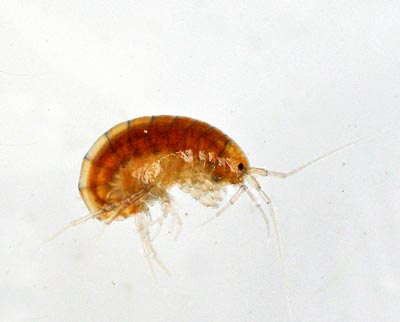 Most Amphipods are Marine, but there are about 150 species of freshwater scuds in North America. They are secretive bottom-dwellers, gracing cool, well-oxygenated springs and pools that have some calcium in the water for their shells (one source linked scud size with oxygen availability). They may grace these waters in huge numbers, up to 10,000 per square meter, especially in fish-free habitats. Look for scuds in tangled vegetation or under decaying leaves. Through these thickets, they crawl and pull themselves along, using clawed legs and bodily contortions. Some species of amphipods are highly specialized, living in caves or in deep, underground springs. Others are able to survive the drying of ephemeral ponds by burrowing into the mud. The presence of some species of amphipods testifies to a waterway’s purity, but many species of scuds are tolerant of varying degrees of pollution.

The BugLady read of behemoth scuds that grow as large as an inch, but most are barely half of that. Like a flea, a scud’s body is ultra-streamlined—arched and laterally flattened (if you look at them head-on, they’re pretty slim). The front end (cephalothorax) is home to eyes, antennae, and mouth. The next seven segments are the thorax, with each segment bearing a pair of long climbing/walking legs (the first two pairs end in claws). Gills are located at the base of the thoracic legs, and the abdominal legs push oxygenated water toward the gills. The last six segments are the abdomen, with six pairs of shorter, swimming/jumping legs. Amphipoda means both kinds of foot. Scuds come in a variety of mostly neutral to pastel colors (influenced by their diet) and are often translucent. Telling one genus from another requires a microscope.

So, how does a scud make sense of the world? Scuds are light-averse, preferring starlight over sunlight. Their two pairs of antennae are sensitive to both touch and smell. While many amphipods see through well-developed, functioning, compound eyes, species restricted to caves and underground springs may be eyeless or have only vestigial eyes (but well-developed tactile hairs). Normally-eyed species may evolve into blindness when restricted to permanently dark environs. 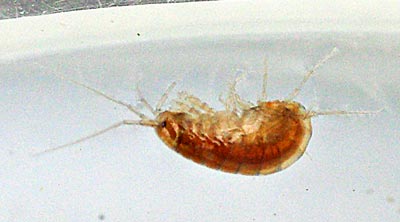 And where do little scuds come from? Males and females swim piggy-back for days, preparatory to The Act. If she needs to molt during that period, they separate briefly and then get back together after she has shed. Like water sowbugs, female scuds have a structure called a marsupium on the underside of the thorax. He passes sperm to her, and it mixes with the eggs (1 to 50 of them) in her marsupium. She carries the eggs around for one to three weeks until they hatch, and then carries the little tykes for an additional week. If the dissolved oxygen in the water decreases, she may “ventilate” her marsupium by moving her first three pairs of abdominal legs to create a current. The next time she molts, her fully-developed (but microscopic) young are released. The young scuds shed their exoskeleton and grow eight or nine times as they grow into adulthood (the exoskeleton splits across the back between two thoracic segments. First the front half of the body is pulled out of the old exoskeleton and then the rear half). Most amphipods live for a year.

The BugLady encountered a bit of amphipod ambiguity about whether a female breeds more than once. Pennak, in his venerable Fresh-Water Invertebrates of the United States, states that most species of amphipods breed only once. Other sources say that females can have several broods between April and October, but they must dance the dance each time. According to Morgan, a female that produces 22 eggs each 11 days potentially has 24,221 offspring in a year (but egg mortality is high).

Scuds are listed as detritivores, which means that they eat detritus—fragments of decaying organic stuff—from the water around them. This “recycling”—breaking down organic materials into ever-smaller pieces for re-use—is an important job. They also graze on the thin layer of algae, fungi and bacteria that covers submerged leaves, and they may eat their own shed skins (skins that, according to one source, can be seen floating on the water’s surface). Though they’re not predators, they may nibble on dying or freshly-dead aquatic critters. They use those two pairs of clawed feet to hold a morsel while they chew on it. They are, in turn, eaten by aquatic insects, salamanders, and some birds. Scuds tend to live in waters too constricted and shallow for fish, but fish can be a major predator. In the Western lakes where scuds were introduced as trout food, they make up almost a half of the trout’s diet.

If you Google “freshwater amphipods,” most of your hits will be photos and scientific articles. If you Google “freshwater scuds,” you’ll be inundated by fishing sites and opportunities to buy scud-like lures (scuds have a presence in the social media, too). Several of the fishermen’s sites point out that scuds are related to shrimp, and propose that although they are small, scuds might taste good in garlic sauce. The presence of the usual compliment of parasites in scuds suggests culinary caution.