When BOTW was in its infancy, its 14th episode featured Scorpionflies, a weird and wonderful group belonging in the small order Mecoptera (about 500 species, world-wide). Today the BugLady is revisiting Scorpionflies (family Panorpidae) because they have been revisiting her. The young lady in these portraits (Panorpa helenae (probably)) flew into the BugLady’s family room on a recent June night and cooperatively strutted her stuff on a piece of paper and on the BugLady’s finger. For some dynamite pictures of Scorpionflies (and of the astonishing Snow Scorpionfly) go to bugguide.net and type scorpionfly into the search box. Then do the same with Hangingflies. At any rate, the BugLady did not do them justice the first time around. Insufficient scholarship. 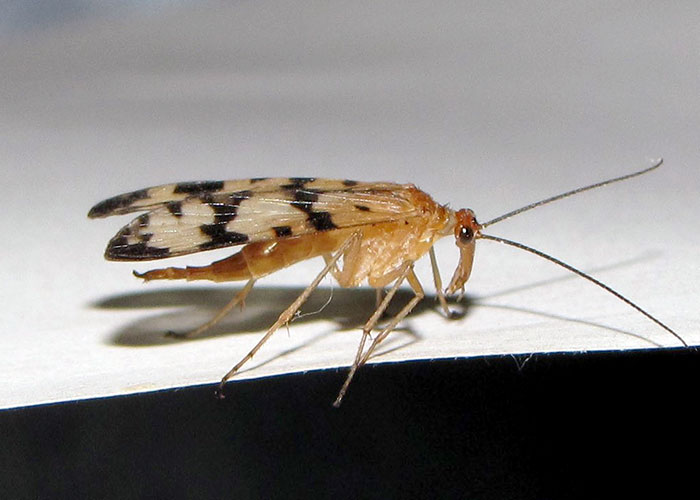 So. Scorpionflies and their relatives the Hangingflies (crane fly look-alikes that eat crane flies and are the only insects known to catch their prey with their hind legs), and the Snow Scorpionflies (which resemble hi-gloss springtails), and Earwigflies (which have earwig-like claspers on their abdomen) (Mother Nature does, indeed, have a sense of humor) all belong to the order Mecoptera. The 0rder is so varied that some entomologists are itching to carve it up into multiple orders. Mecoptera means long wings, and except for some wingless species, Mecopterans have four of them but are weak flyers. Crane flies and other true flies (Diptera) have two wings followed by two short-stalked knobs (haltares) which are vestigial wings used as balance organs.

Scorpionflies get their name from the males of one family, which have on their abdomen an up-turned tip (a.k.a. enlarged, bulbous genitalia) that resembles a scorpion’s tail (but they neither sting nor bite and are “medically harmless”). Both genders sport long antennae, compound eyes, and a trunk-like snout that has chewing mouthparts at its end. 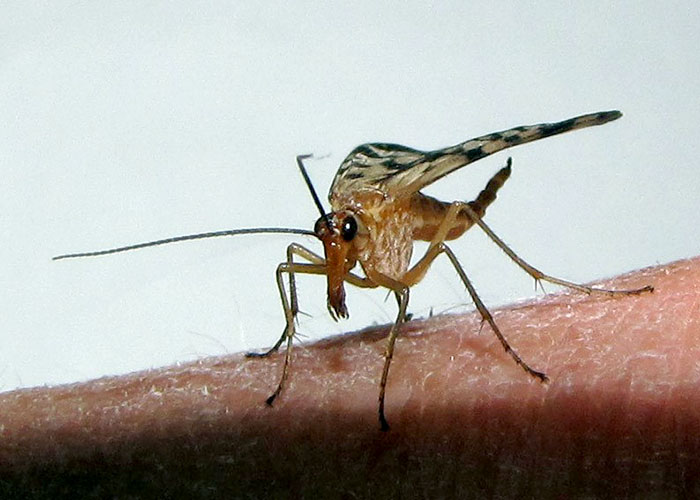 Secretive scorpionflies are most often seen ducking under leaves in dense, shady, cool vegetation or near wetlands. Adults feed on ripe fruit, fruit juice, nectar, pollen, and on dead and dying insects, and they can snitch insects out of spider webs without getting stuck. The larvae are omnivores. Both stages are saprophagous (feeding on dead, decaying organic material—remember the carrion beetles).

When a young scorpionfly’s thoughts turn to romance, he will exude a scent called a pheromone and quiver his wings at the girl of his dreams. He also presents her with a “nuptial meal”—in the case of the Panorpids, it is a dense wad of saliva which she eats during mating (hangingflies present their sweeties with dead insects, and female hangingflies judge their suitors by the quality of their gifts; There are accounts of males pretending to be females so they can get a meal). Gift-givers have higher success rates with the gals, and gift recipients lay more eggs. The BugLady is simply presenting scientific facts here.

Scorpionflies practice complete metamorphosis. Eggs are laid in the soil; the caterpillar-like larvae (which are unique in sporting compound eyes) live on the surface of the soil or under leaf litter; and they burrow back into the soil to pupate.

Mecopterans have long been considered to be closely related to fleas, which are in their own Order, but fleas are now believed by some scientists to be highly specialized Mecopterans! Entomologists believe, based on fossil evidence, that extinct Scorpionfly ancestors—the Order was larger and more diverse in the olden days, 250 million years ago – are common ancestors of fleas, caddisflies, flies, and butterflies/moths. Quite a lineage for this odd and unassuming little insect.

P.S. Speaking of old episodes, more than 80 episodes of BOTW, plus some reruns, have “aired” since it’s humble beginnings. Old episodes are now being archived in random order by Riveredge Nature Center and by the UWM Field Station. Both are informative websites, so browse a bit while you’re there. The Riveredge archives may occasionally be “gently censored” in order to protect innocent maidens and kiddies. As always, the BugLady owns the typos.